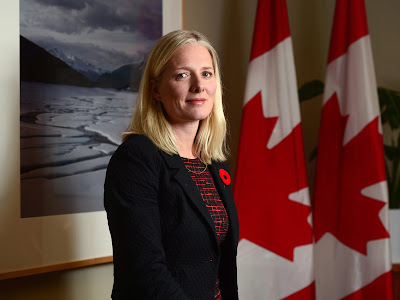 Like all women in politics Canada's Liberal Environment Minister Catherine McKenna has faced a variety of sexist insults, the most well-known of which originated from the far-right rag The Rebel when they described her as a "climate Barbie".


Lowering itself to its usual bottom feeding troglodyte level, The Rebel here managed to be mean-spirited and ugly in that way that makes the juvenile giggle like they are school children standing behind the playground bully.

Since women in politics and just about any public field are regularly called much, much worse, it is hardly surprising that a large number of online right wing trolls and Ezra Levant fans have jumped on board with the sobriquet and feel that it is somehow a legitimate and harmless jab.

They mock her completely correct fightback against a so-called journalist from The Rebel at a recent press conference. Whatever else will be said about her as a minister this was undeniably one of her finest moments.

Less understandable are those (sometimes even progressive) commentators or columnists who acknowledge that "climate Barbie" is sexist but still claim it is fitting because they think she has been an ineffectual minister.

Rosie DiManno probably best embodied this line with her logically incoherent Toronto Star piece that opens by stating outright that the moniker is sexist but then saying "big deal" and attempting to show it is not a "big deal" with a variety of completely irrelevant quotes from Winston Churchill. Churchill, as we know, should set the standards for today's political discourse despite having been an unrepentant reactionary, colonialist and imperialist as well as something of an asshole.

He also died in 1965 when there was only one woman in the entire British cabinet (and it was a Labour cabinet) and when women in politics were only rarely taken seriously at all anywhere in the world. Not sure that throwback is an especially well thought out one in this context.

She then goes on with tired old lines about how "politics is a rough-and-tumble business" and the alleged dangers when "powerful, accomplished women present themselves as delicate flowers", which really has little to do with anything now that we are no longer living in 1965. She even, after describing McKenna as a "snowflake", stoops to claiming that "sexism has become conflated with sexual crime", which is not simply false but has nothing to do with McKenna who has never in anyway claimed she was a victim of a sexual crime in this instance.

To folks like DiManno the obvious question to ask is would a similarly allegedly minor or no "big deal" racist or homophobic comment about a politician be okay? I really doubt they would say it was. Yet despite the vicious impact of sexism and misogyny on half of humanity and despite the totally demonstrable fact that women have yet to achieve real equality in fields like politics, apparently knuckle-dragging blustering on this front is just fine as long as, I suppose, it does not cross some line where "acceptable" sexism becomes "real" sexism or whatever it is we are supposed to take from such total horseshit.

Sexist comments are a daily oppressive and ideological function of patriarchy that are directly meant to diminish women, belittle them, and keep them in their "place". Sexist comments are designed to imply that part of the reason or perhaps the entire reason that someone should be dismissed or held in contempt is that they are a woman. To call a woman a "snowflake" for standing up to this is to openly ally yourself with the very worst narratives of the very worst elements of our political discourse.

It was entirely based on this type of "Barbie" narrative that women were largely excluded from politics altogether until relatively recently and that even when they were included they were generally regulated to secondary or backbench roles.

Catherine McKenna is the Environment Minister in a government that I do not support and whose environmental policies I find to be ineffectual and even, on some fronts, dangerous. But that has nothing at all to do with McKenna's gender, apperance or hair colour and to insinuate that she should have to endure such insults because "that's politics" is overtly reactionary rubbish.

Posted by Michael Laxer at 9:36 PM