Leningrad During the Days of the War and in Peacetime -- A Photographic Exposition of Resistance, Victory and Reconstruction

This powerful and moving postcard folder was published in the USSR in 1980 and shows "before and after" photographs of locations in Leningrad during the Second World War and after reconstruction and peace.

Leningrad was, of course, under siege by Nazi forces for 872 days. It heroically resisted despite constant encirclement, bombardment and mass starvation in the first winter. It is believed that over a million citizens of the city lost their lives.

After the siege much of the city was destroyed as were a great number of the cities of the USSR. It was, however, rebuilt in the postwar years as was the rest of the Soviet Union. The story of this rebuilding is remarkable and what was accomplished can be seen seen in leaflets like "USSR - Facts and Figures 1982".

Finally, the incredible pride felt about the defeat of the Nazi colossus as well as the central role this almost unbelievable collective trauma played in the Soviet narrative about themselves come through in these photos of struggle, resistance, victory and rebirth.

Here are the postcards with the before / after text from the back. 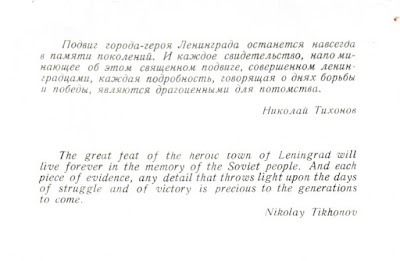 The Bronze Horseman sheltered from the bombs /
Decembrists Square 1980 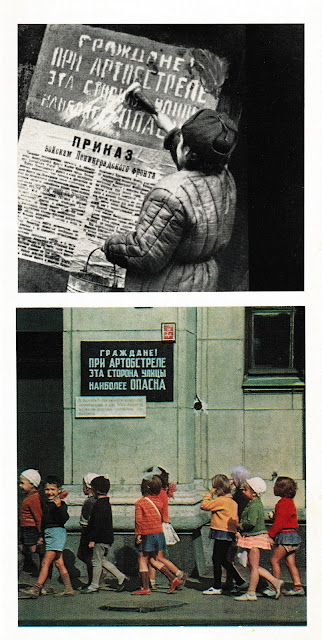 The blockade has been lifted! /
Kindergarten students taking a walk past the same spot
(I find this one particularly moving)

Lenin Square, Monument to Lenin safely protected from bombs and shrapnel /
Lenin Square today -- one of the most beautiful squares of the town 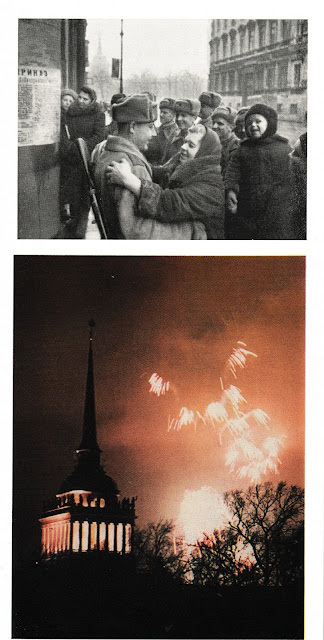 January 27, 1944 -- The day the blockade was lifted /
Festive salvo of remembrance

Posted by Michael Laxer at 4:03 PM