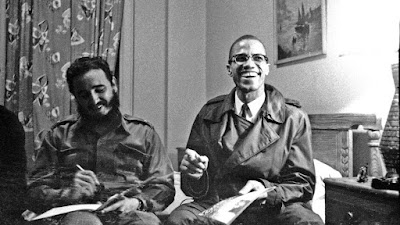 This list covers the week of November 27 - December 4. It is in order of date of the article's  release. This week's installment has a large number of articles related to Castro and the importance of his legacy in the face of right wing and mainstream media lies about it.

1) Africa is not conflicted about Fidel Castro’s legacy

With Fidel Castro gone, Africa’s liberation leaders lose a loyal friend and a hero of the people.

When Africa was a battleground between the Cold War powers, Cuba emerged as a friend of liberation movements. Cuba’s involvement in Africa went beyond the ideological standoff between right and left to a real helping hand: sending soldiers, doctors and teachers when post-colonial Africa was perhaps at its most vulnerable.

David Hamilton was known for his pedophilic photography that some called “art,” but was little more than sexualized imagery of teenage girls. What he produced and encouraged should never have been celebrated, as it enabled Hamilton (and likely many more men) to abuse who knows how many girls, normalizing pedophila and exploitation in the process. Yet he enjoyed fame and success for decades — from the 70s right up until the aughts, releasing two new books in 2006. Due to recent allegations of rape, we may pretend to have learned our lesson, but considering the ever-present popularity of men like Terry Richardson and the ongoing sexualization of young women and girls in the media, it’s clear we are still, as a society, unwilling to make the connections necessary to protect girls and women.

3) Was there an alternative to Fidel Castro’s “Stalinism”?

Today I was shocked by the torrent of denunciations aimed at the Stalinist “dictator” Fidel Castro. No, I am not talking about CBS or CNN, where it might be expected. Rather it emanated from FB friends, most of whom supported Tony Cliff’s theory of State Capitalism but with some anarchists as well. I was also shocked by the vehemence that exceeded anything that Sam Farber or Mike Gonzalez wrote for the occasion even though they were as bad as I might have expected.

4) On the death of Fidel Castro

All this back and forth on the CBC about Fidel Castro’s death is enough to make any Canadian worth her salt forget to put it on her steps at today’s first snowfall.

It seems that – according to the CBC — the late Fidel Castro was a saint to some, and a sinner to others. How original.

5) Cost of poverty in Toronto pegged at $5.5 billion a year

Poverty in Toronto costs between $4.4 billion and $5.5 billion a year, according to a groundbreaking report on what we all pay in added health care, policing and depressed economic productivity for the city’s 265,000 families living on low incomes.

There is a mantra going round some parts of the left, that the Trump vote was an antiestablishment rebellion against neoliberalism and globalisation by the disenfranchised ‘white working class’.

But this is untrue and dangerous. Here’s why:

7) I Am a Dangerous Professor

Those familiar with George Orwell’s “1984” will recall that “Newspeak was designed not to extend but to diminish the range of thought.” I recently felt the weight of this Orwellian ethos when many of my students sent emails to inform me, and perhaps warn me, that my name appears on the Professor Watchlist, a new website created by a conservative youth group known as Turning Point USA.

8) Political correctness: how the right invented a phantom enemy

Three weeks ago, around a quarter of the American population elected a demagogue with no prior experience in public service to the presidency. In the eyes of many of his supporters, this lack of preparation was not a liability, but a strength. Donald Trump had run as a candidate whose primary qualification was that he was not “a politician”. Depicting yourself as a “maverick” or an “outsider” crusading against a corrupt Washington establishment is the oldest trick in American politics – but Trump took things further. He broke countless unspoken rules regarding what public figures can or cannot do and say.

Noah Rabbani was just trying to get home from a friend's house overnight Saturday in Hamilton — but he ended up in intensive care after a brutal beating from two men with a baseball bat. Now his family is left wondering if the attack was a hate crime.

The Left Chapter readers can help Noah's family raise the funds for his recovery at this link:

I made a donation and hope you will consider making one as well.

The death of Fidel Castro has evoked deep emotions around the world. Nowhere is this more true than in Cuba, where the country began nine days of official mourning on November 26. Meanwhile, in Miami, some ex-Cubans are celebrating on the streets of Little Havana.

11) What Gamergate should have taught us about the 'alt-right'

It’s understandable that the world didn’t much care about Gamergate. The 2014 hashtag campaign, ostensibly founded to protest about perceived ethical failures in games journalism, clearly thrived on hate – even though many of those who aligned themselves with the movement either denied there was a problem with harassment, or wrote it off as an unfortunate side effect. Sure, women, minorities and progressive voices within the industry were suddenly living in fear. Sure, those who spoke out in their defence were quickly silenced through exhausting bursts of online abuse. But that wasn’t why people supported it, right? They were disenfranchised, felt ignored, and wanted to see a systematic change.

12) Scientists have long feared this ‘feedback’ to the climate system. Now they say it’s happening

At a time when a huge pulse of uncertainty has been injected into the global project to stop the planet’s warming, scientists have just raised the stakes even further.

In a massive new study published Wednesday in the influential journal Nature, no less than 50 authors from around the world document a so-called climate system “feedback” that, they say, could make global warming considerably worse over the coming decades.

13) The Fierce Debate Over Castro’s Legacy

Fidel Castro’s death, at 90, has sparked a fierce debate in the West over his legacy. I specifically mention the West as elsewhere there is no debate: Castro has rightfully been lauded as one of history’s great emancipators, a man who led a revolution that succeeded in throwing off the yoke of US imperialism.

14) Baloney Meter: Did the Liberals promise electoral reform only with broad support?

During last year's federal campaign, Justin Trudeau promised that if elected, the Liberals would ensure the 2015 vote was the last in Canada under the so-called "first-past-the-post" electoral system.

15) Cornel West: Unlike Bernie Sanders, I'm Not Convinced the Democratic Party Can Be Reformed

Anybody who lives in Louisiana knows about Joe McKnight.

There, he was a living legend. A king.

"Former U.S. President George W. Bush, who led his country into a disastrous war with Iraq on the basis of concocted evidence of weapons of mass destruction and who authorized the use of torture against foreign prisoners of war in violation of the Geneva Conventions and international law, died today..."

No, George W. Bush did not die today. But, if he had, you can bet that would not be how the media would begin reports of his demise.

So why does "brutal dictator," "murderous tyrant," etc., seem to be the required starting (and often only) point when the mainstream western media writes about the death of former Cuban leader Fidel Castro?

18) Prime Minister: You failed to do your job by approving pipelines

Stewart Phillip, The Globe and Mail

You completely failed to do your job when you arrogantly announced that you were acting in the national interest by approving the Kinder Morgan Trans Mountain Expansion (TMX) and Enbridge Line 3 pipelines. Your main job as leader of Canada is to protect Canadians' health and safety.

19) A People’s History of the Third Reich

Liberals should stop asking whether Donald Trump—or his chief strategist and the former head of Breitbart, Steve Bannon—is a Nazi. Not because the employees of Trump’s son-in-law and adviser said so in an embarrassing paean to the “zealous Zionist” who has Trump’s ear, or even because, like one high school history teacher and Holocaust expert in Northern California, you could be forced into retirement. No, the reason to resist the temptation to whether our president elect and his ghastly racist retinue are bona fide Nazis is that it’s the wrong question, and it’s always been the wrong question.

As grieving Cubans bury the ashes of the late Fidel Castro this Sunday, can I respectfully ask this question?

What is it about the legacy of Castro that induces otherwise normal conservatives — particularly Americans, but also many Canadians — to race to the nearest mountaintop and shout out all manner of anti-Castro insults?

Finally, while this article was from a couple of years ago, it is definitely worth sharing again in the wake of Fidel Castro's death.

When it came to matching words with deeds on the topic of racial equality, the most stalwart leader of the Western hemisphere, over the course of the 20th century, was Fidel Castro.

Posted by Michael Laxer at 8:53 AM