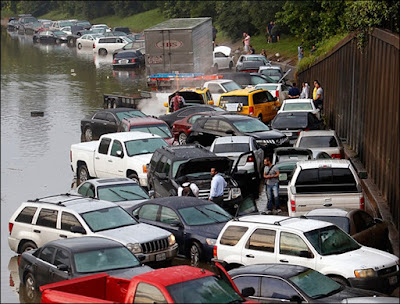 Simply look at the air of unreality in many of the online and social media debates about road tolls occurring in Ontario now -- most of the time made completely detached from what we know about the dangers of fossil fuel consumption.

The issue is not Toronto Mayor John Tory's plan (which is a stupid plan, though it matters very much on what basis you oppose it or propose changes to it) or this plan or that plan, it is cars themselves and car culture -- and there is nothing more regressive than car culture.

It is not just that some folks are lining up with Patrick Brown and Ezra Levant to oppose a plan supported by Ontario's awful Liberal government and the mayor -- making this one of the great fights between bad and bad in recent memory -- and it is not just that in doing so they are embracing reactionary anti-tax rhetoric that is totally unnecessary to questioning the wisdom or efficacy of Tory's proposal,  it is that doing this in the way it is being done also inherently embraces the notion that people should be able to continue to drive cars if they "need" or want to to the extent that they do now.

And that is not just reactionary, it is delusional.

Cars and commercial vehicles are, quite literally, playing a key role in destroying the world. They are, and not that slowly either, making sick or killing you, your friends, your family, your neighbours, your co-workers, your children and millions of people you don't know.

They are a plague of fossil fuel consuming locusts and the incredibly  privileged North American car culture where so many tens of millions commute by themselves in cars everyday is simply not sustainable and simply not going to continue no matter what.

According to Statistics Canada on average "74.0% of commuters, or 11.4 million workers drove a vehicle to work" by themselves on any given day in Canada in 2011 (the last year for which there are statistics). Carpooling is still unusual, and why would it not be? The government and municipalities are not doing anything serious, for the most part, to get people to carpool.

In the United States the percentage of people driving alone to work is 76.4% and carpooling has declined dramatically since 1980.

Yet, as a friend of mine on Facebook remarked "the problem is the fuel consumption and carbon emissions resulting from private car ownership is unsustainable yet North Americans reject any solution that entails giving up your automobile."

These two positions are incompatible.

Cars are not the only aspect of our patterns of consumption that are unsustainable, but they are a major one. Massive changes in meat (especially beef) production and consumption as well as changes to industrial agriculture lie of necessity ahead as well, as do changes to how we produce many consumer items more broadly.

We are past the point by far where individual decisions will make a serious difference. It is not about this or that person doing the wrong or the right thing. It is a much broader issue than that requiring large scale government and societal action.

As always, as the effects of global warming get worse and worse, without serious and systemic reinventions of our economic systems and methods of distribution it is the poor, the marginalized, racialized communities and the peoples of the Third World who will pay the highest price and do so the soonest. Remember that if you see someone talking about what is or isn't 'elitist' or is or isn't 'regressive'.

This is also not an invention of mythical Toronto 'elites', a frankly bizarre talking point for a leftist to use given that it is basically directly lifted from the right.

Climate change is a fact, it is of the greatest concern to scientists and environmental activists around the world, politicians and people in some other parts of the world are doing significantly more about it and it is going to have a massive impact on your life and possibly kill you whether you live on Queen St. or in rural Manitoba or on an isolated potato commune in the most remote place on the planet.

Tolls don't even start to get there, especially not a silly plan like Tory's that is not even about stopping driving anyway. But the opposition to it has exposed just how many think that people driving where they want, when they want is some kind of inalienable right or social necessity.

People have to stop driving in the way and patterns they do now. It is a form of collective suicide if we allow the present situation to keep going. And it really seems we will -- there is no political will out there at all to change it.

When a figure like David Suzuki says "For years, we've been subsidizing [the oil and gas industry] with billions of dollars. Let's claw that back and let's put that into the job creating areas of renewable energies, of bus lines, all of the things that need to be done. Let's invest in that direction." and opposes pipelines, many people on the left will nod their heads in approval without seeming to give any thought to the reality that doing something about this will entail broad and dramatic social changes.

The steps we actually need to start taking will make road tolls look like nothing. Ending the massive public subsidies to the fossil fuel industry and creating serious disincentives to driving will both require and result in far higher gas prices, enforced carpooling, limitations on driving, banning the production and driving of luxury and certain types of other cars, much higher taxes on purchasing cars themselves and a massive shift in public infrastructure spending from a transportation system centered around private vehicles to the creation of extensive public transportation systems both in and outside of municipal areas.

And if we don't begin to take these steps collectively now we will be forced to in desperation shortly.

Almost daily there is news of the mass extinctions coming, the alarming heating of the planet happening far faster than anticipated, the possibility of a methane/temperature feedback loop (which could literally be an extinction level event),  and on-and-on-and-on.

As was noted at the end of an incredibly unnerving article in the Guardian, "Earth is warming 50x faster than when it comes out of an ice age":


The sooner we transition away from fossil fuels and cut our carbon pollution, the better we’ll be able to limit the climate destabilization and associated damages. It’s a sobering thought: our children, grandchildren, and future generations for hundreds, even thousands of years will feel the impacts of the choices we make over the next decade.

It is beyond disturbing. This is what we face and time is running out.

No matter how much people may not want to accept it, this is fact. And if the left is serious about climate change it needs to understand and advocate for the reality that we have to make dramatic changes to the fabric of our way of life so that we don't join the dinosaurs.

Especially as it is difficult, if not impossible, to see how these changes can be made within the context of a capitalist or market economy. They certainly cannot be made in a neo-liberal ideological context in a way that would not be cruel, Malthusian and Social Darwinist.

It is to us to propose, create and advocate for a new vision of society that takes us beyond this in ways that include everyone equitably given the changes to consumption and production that must lie ahead. If we don't, they will happen anyway (they cannot be avoided) but it will be a future that surely will be deeply dystopian.

Outrage about road tolls and waxing poetic about how people should not have to pay more to use their cars and trucks in the ways they do now, no matter what plan we are talking about, is simply out of touch with the environmental issues confronting us.

See also: What is with all the Ontario left ranting about road tolls and Toronto 'elites'?