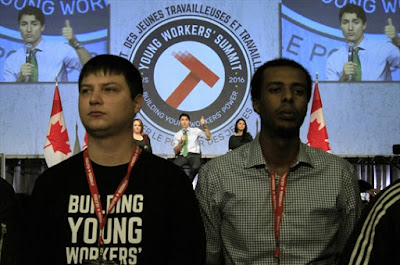 October and November saw 44 posts published on The Left Chapter. In terms of hits this period saw the highest number, again, for any two month period in our history!

Our top post for the month was also one of the most widely read and shared in our history.

Thanks again to all our readers and contributors.

Without any further ado the top six posts from the two months, in terms of hits, are:

1) Just what is going on with Canada's labour movement leadership?

The last few weeks have seen a series of what are seemingly truly perplexing moves and actions by some of the country's most important labour leaders.

2) The wages of liberalism is Trump

After a generation of retreat that saw its abandoning of the welfare state and of any meaningful advocacy for working people and much of the middle class in the United States, it can now truly be said that the wages of liberalism is Trump.

The victory of Donald Trump in the American election signifies a number of things many of which are profoundly dangerous.

3) The CLC and the Liberals - Pandering to power

In what is one of several "let them eat cake" moments made by members of the governing Liberal caucus lately, this past Saturday Finance Minister Bill Morneau threw young Canadian workers under the proverbial bus when he said that they should get used to the 'reality' of precarious employment.

4) The beer can toss was bad. The racism at the Blue Jays game was much worse.

By now I doubt there is a person in North America who has not heard about the great Beer Can Toss Toronto Blue Jays scandal of 2016 after some (likely inebriated) twit launched an overpriced beverage at Baltimore outfielder Hyun Soo Kim during the Wild Card playoff game Tuesday night.

It was an ugly incident that could have resulted in Kim's serious injury.

In what has to be one of the single most demented and offensive examples of some bizarre version of pseudo-liberal 'impartiality' in recent memory, the good folks at McMaster University have seen to fit to remove anti-Nazi posters from the campus on the grounds that "McMaster's goal is to ensure a welcoming and inclusive community."

Yes, you read that correctly. McMaster University, it would seem, wants "to ensure a welcoming and inclusive community" including, apparently, for neo-Nazis!

6) The ONDP's embrace of Mike Thomas says a lot about it. But nothing good.

You would think that the 'brain trust' running the show in the Ontario New Democratic Party (ONDP) would have learned something from its disastrous attempt to try to court the right wing populist vote in the 2014 provincial election.

But apparently if it has learned any lessons they were the wrong ones!