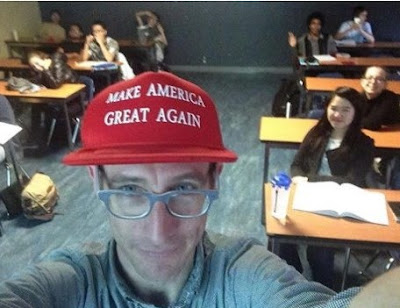 Apparently perturbed by all of the division and misunderstanding that the North American commentariat have decided exists between folks like academics and the 'common people', The Walrus -- that venerated Canadian progressive magazine -- has decided that Canada needs to do some bridge building!

How to accomplish this?

Well, it seems the Walrus wants to do a reality TV style knockoff  "odd couple" and pair up opposites to chat, break bread, and so on. A kind of Come Dine With Me, only with deep and meaningful conversation one presumes.

Hence, on The Walrus' Facebook page we find the following: 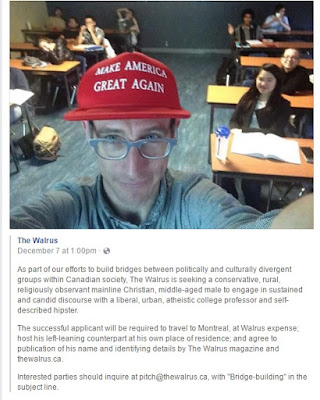 Yes, indeed, The Walrus "is seeking a conservative, rural, religiously observant mainline Christian, middle-aged male" (who is also highly likely to be white) -- or in other words a caricature of what is assumed to be a Canadian Trump supporter --  "to engage in sustained and candid discourse with a liberal, urban, atheistic college professor and self-described hipster", another caricature of a Trump opponent.

Given that the goal is allegedly to "build bridges between...culturally divergent groups within Canadian society" I guess we should assume that the professor would reflect Canada's diversity and be a person-of-colour or a woman, right?

Guess again! The "liberal, urban, atheistic college professor" is apparently a white male professor at Concordia. (As I determined by tracking down a public Facebook posting they made.)

I am sure that the professor's intentions are very good but, to be clear, The Walrus' editors apparently want two men -- one of whom is known to be white and the other who is to be a "conservative, rural, religiously observant mainline Christian, middle-aged male" -- to represent the "politically and culturally divergent groups" of Canada in an exercise in national bridge building discourse.

Because, of course, what Canada really needs is a rapprochement between Christian conservative and liberal men. These voices are clearly not being heard enough.

Afterwards, perhaps they can movingly tell the nation how they really aren't so different after all. Or maybe they are different? Or maybe who cares?

The Walrus needs to seriously reevaluate this idea because as it stands, even if just a gimmick or quasi-satire, this is a pretty exclusionary attempt to allegedly be inclusive and "build bridges".

The Walrus might want to consider adding a few more divergent voices to the discussion if they want it taken seriously.

Email ThisBlogThis!Share to TwitterShare to FacebookShare to Pinterest
Labels: Come Dine With Me, Donald Trump, The Walrus