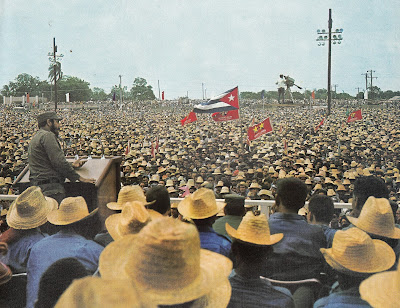 Today by fluke, while combing through some old leftist magazines and leaflets, I came across a small bulletin style publication from 1994 called CommuniCations. This was the newsletter of the Metro [Toronto] Council of the Communist Party of Canada.

In this newsletter was a small section called "Worth Quoting" and in this section was a quote from Fidel Castro in 1992. This would have been when Cuba was facing terrible new struggles due to the collapse of the Soviet Union and its Eastern European allied communist regimes.

But, especially in light of Castro's death and the rise of the far right in Europe and North America, this quote also speaks so powerfully and movingly to us today.

"Never before has humanity witnessed such an upsurge in the power of reaction and the empire is beset by all kinds of contradictions. But this is the time we're in, and I think that, right now, the preservation of values is of decisive importance for all progressives, all true democrats and all revolutionaries - all who want the best for humanity and who cherish the noblest sentiments. Preserving those values is of unquestionable importance.

No matter what happens, other times will come. Right now we're in the midst of a huge reactionary wave; later, a huge revolutionary wave, a huge progressive wave will come again. This is for certain.

Therefore, I think that what we're doing is of great importance for the future, but it doesn't make us believe that the future is entirely dependent on us. It gives us great encouragement to know that we're defending the future and that we're a symbol of the future and of those principles for a world filled with people who are hungry, exploited and suffering."

As a final bit of parting wisdom from one of history's greatest revolutionary leaders, this reminds us that, despite how bleak the present may look and how terrible the odds, we have never lost as long as we continue the fight.

As a phrase coined by a comrade of mine in the Socialist Party of Ontario put it, "It is never too late to write the future".