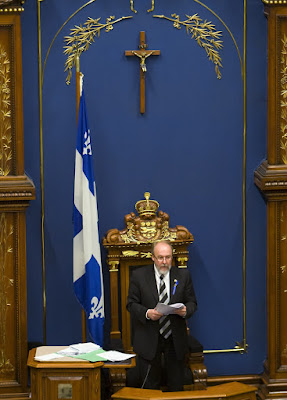 Especially now in the era of Trump the reality of where anti-Islamic rhetoric and actions can lead has come into clear focus. Islamophobic laws that would accept the violation of fundamental and basic freedoms under the guise of promoting women's rights, secularism or social order are particularly dangerous at this junction in history.

Yet at the recent NDP Leadership debate in Montreal this past weekend three of the four contenders failed to stand up fully against the Quebec government's shameful proposed Bill 62 which claims to be about "religious neutrality" while in its very wording it clearly targets women of the Islamic faith who wear the niqab.

This wording of Bill 62 is such that it has led to concerns -- from no less than the Mayor of Montreal -- that it might even be used to prevent women wearing the niqab from accessing public transit.

Jagmeet Singh was the only one of the candidates at the debate who was willing to state specifically that he opposed it regardless of the alleged rational behind it.

The rest of the candidates, while saying they opposed any legislation that would regulate what women (or people generally) should wear, did so while saying it was necessary to respect Quebec and its culture of "secularism" as if that is what Bill 62 is at all about.

(To watch a stream of the debate click here)

They have also not all been willing to say they would challenge the law in court if it is passed and they are in government.

These are MPs from a party that justly attacked the Harper Conservatives for their dog-whistle Islamophobia in the 2015 federal campaign.

This notion that Bill 62 is about "secularism" is an affront to the very principles of secularism which have been cynically hijacked by politicians again trying to pass this type of bill under a giant crucifix in their provincial National Assembly.

In the end it is not "secularism" you are trumpeting if you are threatening to pass actual laws to deny government jobs and public services to women -- and it is all about women...and only women wearing Niqabs...thereby seeking to "liberate" women by ghettoizing and ostracizing them from the very means to function in a society at all -- from a specific and racialized group for what they wear that is "too religious",  yet you are going to keep up with pretensions that a crucifix in your parliament itself is somehow not a violation of the principle of "religious neutrality".

Seriously. How much more obvious could the hypocrisy and real motives be?

Never mind the vital fact that this law would target the supposed 'victims' of the niqab themselves. Bill 62 in Quebec does this rather obviously as it has provisions that are directed specifically at people wearing religious facial coverings.

Such laws are almost always unconstitutional. And so they must be. If the government can regulate one form of religious dress or belief to allow access to jobs and public services, then why not others?

As for the absurd and racist notion that if those of the Islamic faith wanted to come here they should be like "us" or that they should adopt "our" values -- whatever that means in a nation of immigrants built on stolen indigenous lands -- that argument has been used in our history against Italians, Jews, Sikhs, Catholics, Asians and just about every identifiable group you can name. It was wrong in each of these cases and is now.

Whether it is Sikhs in the RCMP, Jews in the legion, various forms of religious daggers or dress, there are always calls from those afraid of the other for people to set aside deeply held beliefs and conform.

As for the rights of women, in the name of that crucifix in the National Assembly countless crimes have been committed against women and continue to be every single day.

Acknowledging Quebec's nationhood, society and history does not mean we no longer have a responsibility to speak up about proposed laws that could lead to such ugly and dangerous outcomes as Bill 62 could.

Guy Caron stated prior to the Montreal debate“I am making it clear that, above all, an NDP leader must respect Quebec’s national character.” If we take that position then, as Chantal Hebert put it:

...would the same reasoning apply if the National Assembly — in a bid to protect Quebec’s demographic weight in the federation — moved to restrict abortion rights to pursue a natalist policy?
And if Quebec’s collective take on the place of religion is a valid rationale to limit religious rights, are not countries whose governments identify closely with a given religion also within their rights to limit other freedoms in the name of the beliefs of the majority?
Finally, at what point, if any, does Caron think the right to exercise fundamental freedoms should constrain the National Assembly’s latitude to consolidate the province’s secular character?
Here is what is clear: the government of Quebec has put forward a bill that may seek to deny government services to women by law should they refuse to compromise on what is a part of their religious belief system.

Here is what is clear: the government of Quebec has put forward a bill that may seek to deny government services to women by law should they refuse to compromise on what is a part of their religious belief system.

A bill that could do this has no place in a constitutional democracy that claims to respect religious freedom and to support equality of access for all before the law and government, which is a key aspect of secular governance.

Bill 62 must be opposed publicly and explicitly when it is brought up and politicians on the left must make it clear they will use all options, including the courts, to stop it should it become law. This is essential to our broader fight against Islamophobia and bigotry.

This piece uses some wording and passages from a piece that appeared on "Michael Laxer's Blog" in December, 2011.

See also: Fake 'secularism' is not an excuse for Islamophobic bigotry
Posted by Michael Laxer at 9:20 PM