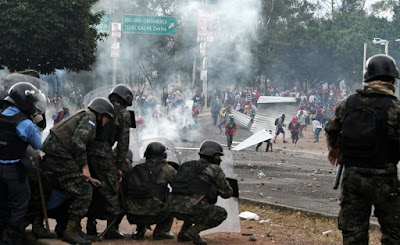 
This list covers the week of  November 26 - December 3. It is generally in order of the date of the article's release.

1) Nepal: A New Democracy or a New Oligarchy?

Recent elections in Nepal may further entrench divisions that have stalled democratic progress for a decade.

2) This is How Cubans Run, Campaign and Vote in Elections

The Cuban electoral process doesn't allow discriminatory or demeaning political campaigning and no organization can pay for any campaign.

Brazil's Landless Workers' Movement marked this year's International Day for the Elimination of Violence against Women by occupying a farm owned by Dr. Roger Abdelmassih, condemned in 2010 to 278 years in prison for raping 39 women, most of whom were his patients.

4) 'Every refuge will close': what funding changes could mean for women

Freya fled her partner after being raped and beaten; without eventually finding a refuge place, she might have had to go back to him.

The head of UN Women has condemned the inadequate response to the widespread use of rape and sexual violence in conflicts, and warned that the amount of money dedicated to fighting such war crimes is shrinking.

A new report by the Ontario Association of Food Banks (OAFB) says nearly 500,000 people in the province turned to a food bank last year, with a growing number of those clients being single-person households and renters.

Finance Minister Bill Morneau is refusing to say whether he sold millions of dollars worth of company stock days before introducing tax changes that may have caused share prices to drop.

9) Joe Ceci says 'recession behind us,' wants unions to agree to wage freeze

The public sector needs to pitch in and reject raises in current contract negotiations if Alberta’s economy is going to continue its path to recovery, the finance minister says.

It would be interesting to see Israel’s response if some other country passed a constitutional amendment letting communities that exclude Jews be established. Under the radar of public attention, robust committee discussions continue on a new Basic Law on Israel as the nation-state of the Jewish people. On Tuesday a committee will discuss a particularly scandalous clause under the heading “preservation of heritage.” The clause states: “The state may permit a community, including the members of a single religion or the members of a single nationality, to establish separate community settlements.”

11) Labour’s review of candidates is not a purge: it’s what’s known as democracy

Construing grassroots internal elections as an authoritarian cleanse is part of the smear campaign against Momentum by those terrified by its success.

12) Rape victim arrested on immigration charges after going to police

Pregnant woman, who had also been kidnapped, was being cared for in recovery centre in London when arrest took place.

The commission has asked for seven years’ worth of data — from January 2010 to June 2017 — to examine whether there is racial profiling and discrimination against members of the Black community during specific interactions.

14) The Franken case is our moment of truth as progressives

Too many are casting aspersions on Leeann Tweeden and making excuses for the senator. This is hypocrisy, and we need to respond differently.

For decades, the DC establishment has been on the payroll of a foreign terror state. But because it's Saudi Arabia, you won't hear a peep.

Hundreds of union delegates met in Toronto from November 20-24th to discuss policy resolutions and adopt a plan of work, at the biennial convention of the Ontario Federation of Labour. This was the first convention since the newly elected team of Chris Buckley, Patti Coates and Ahmed Gaied replaced Sid Ryan, Irwin Nanda and Nancy Hutchinson two years ago. This leadership projected a united image claiming that many of the crises plaguing the OFL over the previous four years have been resolved or dealt with.

Sports Illustrated has announced Colin Kaepernick as the recipient of the 2017 Sports Illustrated Muhammad Ali Legacy Award for his "steadfastness in the fight for social justice, for his adherence to his beliefs no matter the cost."

18) #MeToo Must Fight For Women In Refugee Camps, Not Just On Red Carpets

The stories of girls living in the developing world whose rights are being violated don't seem to captivate our attention with the same urgency.

19) Matt Lauer, Charlie Rose and the Sexism of Morning TV

For the second week in a row, viewers of a network morning show woke up to a disturbing surprise: Two female hosts reporting, and working publicly through the emotion of, the ouster of their male colleague over allegations of sexual misconduct.

20) Children of war: Carrying on with babies born of rape

Tanya Birkbeck, The Globe and Mail

In South Sudan's civil war, sexual violence by both government and rebels is a regular occurrence. 'It's no longer a gun,' an orphanage director says. 'It becomes another way of damaging people's morale and their community.' Mothers raising children born of rape must press on in a judgmental society, as Tanya Birkbeck reports from Juba.

21) The Reckoning at Vice Has Begun

On Thursday, Vice Media reportedly fired three employees after an investigation into claims of sexual harassment. This follows a report earlier this month from The Daily Beast on a “toxic” culture of abuse at the company, including some public embarrassments at Broadly, Vice’s site for women.

Véronique Pronovost still lacks closure three years after filing a complaint with her university against a professor who sexually harassed her, because the school is keeping her in the dark about how — or even if  — the professor was disciplined.

New Statistics Canada figures show that women holding a bachelor’s degree have a median income of $68,342 in 2016, while men with the same level of education earned $82,082.

Six out of 10 people who work in the classical music sector have been victims of discrimination and sexual harassment, according to a study.

Hundreds of people gathered in downtown Toronto on Saturday afternoon to transform the pervasive two-word social media discussion #MeToo into action against sexual harassment and assault.

Québec Solidaire delegates have voted in favour of a proposal to merge with the smaller sovereigntist party Option Nationale.

Although Honduras’ incumbent right-wing president, Juan Orlando Hernández, went into Sunday’s vote certain of re-election, it now seems that such confidence may have been misplaced. Unless his ruling National Party comes up with a scheme to rig the results during ballot counting—which it may very well be attempting to do—it looks like the unity candidate of the left-center opposition forces, Salvador Nasralla, will take the presidency.

The Honduran government has suspended constitutional rights to give the army and police more powers and imposed a dusk-to-dawn curfew to contain unrest triggered by a contested election, a senior government official said on Friday.

Former Honduran president and coordinator of the Opposition Alliance, Manuel Zelaya, called on all Hondurans to take to the streets to defend presidential election preliminary results which showed opposition candidate, Salvador Nasrallah with a comfortable lead over the right-wing incumbent, as the electoral board continues to withhold final results.

30) Honduras On The Brink: Curfew Enforced By Military, Opposition Calls For New Election

The Honduran government suspended constitutional rights and called for the military to enforce a curfew and disperse protesters over the weekend after a contested election plunged the Central American country into a political crisis.