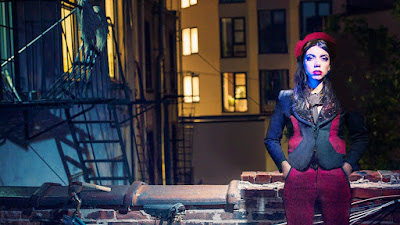 Our annual list of the 20 best songs of the year. For the first time we have also added two "Honourable Mentions". From Jay-Z to Arcade Fire to Jamila Woods to Jessie Reyez, Hurray For The Riff Raff and so much more...here we go!


This is a year unusually heavy with great country songs on the list and at #19 is a terrific song about a very bad day that gets a whole lot better for two people:

A beautiful song about community, survival and resistance...features the awesome Chance the Rapper (who will make a return appearance on this year's list)...the LSD here does NOT refer to the drug!

An intense and justly angry song with powerful lyrics and an equally powerful video.

This deeply felt ballad is both sad and affecting. Beautifully written and made compelling all the more by her exceptional vocals.

This is a deeply moving song about the diminishing and undermining of the expectations and confidence of girls and women, objectification and sexism.

Heartbreaking and beautiful, it has largely fallen through the cracks but deserves a wide audience.

This song kicks ass...great tune, great lyrics from "You're talkin' to me like a child, Hey I've got news, I'm not a little girl, And no, I won't give you a little twirl" to "I'm like nobody else, so you can just go fuck yourself" which may be the line of the year...

Lana Del Rey is back with this terrific tune that manages to be wistful, oddly haunting and even somewhat disturbing in that way that only she can do.

In a list this year heavy with sad songs, this is another one perfectly realized by this terrific Baltimore trio.

A simply stunning song about motherhood and a mother's love for a daughter. It is wise, funny and brought me to tears. Powerful and lovely:

You were not an accident where no one thought it through
The world has stood against us, made us mean to fight for you
And when we chose your name we knew that you’d fight the power, too

As I said at the start this year there are two "Honourable Mentions"...the first is for the incredible video released in 2017 for Elton John's 70s classic Tiny Dancer.

It is almost as if they brought back Robert Altman to direct it, with intersecting stories, multiple narratives and great imagery. Funny, perfectly shot and even at times really sad, it is easily one of the best videos of the year.


The second "Honourable Mention" is for Jay-Z's Moonlight. While not for the song itself (though a Jay-Z song is on this list) it is for the video which is an incredible commentary on media, racism and pop culture. A remarkable take on an iconic episode of a show that many love despite its utter banality, Jay-Z does something here that is both subversive and incisive.

"We stuck in La La Land
Even when we win, we gon' lose"

An unflinching song about loss, aging and death, If We Were Vampires is beautifully written and profoundly haunting and sad.

Maybe time running out is a gift"

Beautifully written and performed this is the best thing Iron & Wine has done since Flightless Bird, American Mouth.


An uncompromising look at the end of love...lyrically and musically this is country music at its very best, greatly aided as well by incredibly strong vocals.

Powerful, powerful song that not only sees the return of Booker but also features the exceptional gospel vocals of the iconic Mavis Staples. Packs a hell of an emotional and lyrical punch in under 3 minutes.


#6 May I Have This Dance - Francis and the Lights feat. Chance the Rapper

An incredible song that is bittersweet in the best sense as well as being a duet with a standout middle act from Chance the Rapper that steals the show.

Arcade Fire has unequivocally exploded back on to the scene with their new releases that include this deceptively mainstream sounding song that belies underling dark themes. Terrific on every level and not the last Arcade Fire entry on this list.

A haunting meditation on loss and death this song heralds the arrival of a tremendous new talent. If you have not heard or seen this, prepare to be wowed.

Visceral, challenging, intense and breathtaking...a stunning song that is both a throwback and an announcement while also a devastating piece of social commentary.

Comrades, Sisters and Brothers, Friends...THIS is the song we have been waiting for and, especially now in this time of great challenges, needed.

A beacon of hope and revolt in the face of darkness.

Profoundly moving it is sure to become a leftist anthem:

Power to the People!