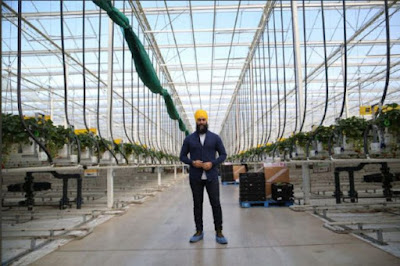 As the somewhat freshly minted, seatless leader of the federal NDP, Jagmeet Singh is on a continuing mission to “visit communities to build momentum for the party’s brand and ideas” whilst compiling an extensive photo op folder. Singh is as photogenic as Trudeau Jr., perhaps more so, with social media forever bringing an end to the previous political style era of tragic comb overs, rumpled Eaton’s blazers and public smoking. Singh’s recent foray into the fruit and vegetable mines of southwestern Ontario was a beautifully framed masterpiece of visual symmetry; the eager well manicured rookie stands tall among the irrigation hoses, nary a leaf out of place. This image suggests at any minute he will be shedding the jacket to fill the flats behind him to the brim, ready for shipment by the skid load to warehouse shopping members nationwide. Undoubtedly on this day the ventilation system was cranked full bore before his arrival and the insecticide spraying put on hold for a while. The temporary foreign workers have been cleared off and given a brief respite from their work while their potential saviour gets the perfect shot for the growing Instagram portfolio. Was their pay docked during the stoppage?

A group that represents the workers who slog it in this environment (so you don’t have to) are not particularly happy with Singh’s sunshine and lollypop spin on his fact finding mission. “This industry has basically been built on the blood sweat and sacrifices of low wage, racialized, precarious workers,” Justicia for Migrant Workers advocate Chris Ramsaroop said in the Toronto Star. Beyond the well worn Farmer/Labour mojo that Singh is trying to harness here, the history of agriculture in Canada has a dimension that remains hidden for the most part, until an event such as the carbon monoxide poisoning of 42 greenhouse workers in Delta BC grabs a headline for the weekend. An aerial view makes it very clear that this isn’t some Little House On The Prairie Ma and Pa outfit, it’s a factory that just happens to have plenty of natural light and colourful edibles within it instead of widgets and punch presses. 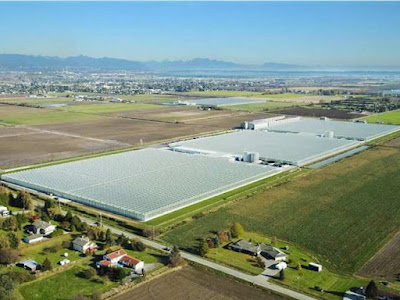 Our agri-food system doesn’t like it when temporary foreign workers have down time. Injured and sick labourers are regularly taken off the job and sent back home if they can no longer cope with the grunt work that they were hired to do. Complaints about conditions, pay and ill treatment can lead to varying degrees of punishment. Harassment is rife both on the job and in the community. Gangsters regularly take a cut of some of the hardest earned wages in the nation. TFWs pay into Canadian benefits that they can never claim or access. There will be a fee for every ambulance ride required during this recent emergency which will put a divot in meagre savings, if there are any savings at all. It’s a tough, segregated, shitty life, with the potential of becoming a full fledged Canadian well out of reach of the majority. This award winning primer, Migrant Dreams, will make you pause for a moment the next time you are among the bags of peppers and poly pacs of on-the-vine tomatoes: 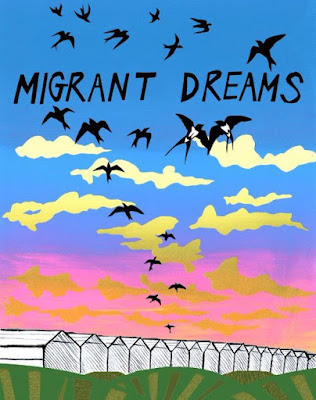 Moments like this add fuel to the great, never ending internal debate of the NDP; do they align with the workers and risk being branded unelectable pinkos or do they schmooze with the bosses and alienate the traditional base? With the temporary foreign workers out of the frame and unable to vote, it’s clear who the target was on this brand building mission. Here is a shot of some berry pickers in Milton from the Toronto Star a decade ago, the only mainstream media outlet in the nation to give the TFWs any regular ink. If the goal is to be firmly on the side of the working class in Canada, Singh will need to get the sleeves up and physically step into the gritty frame with the sweat, tears and toil. Until then his party should be prepared for the grumbling to continue. 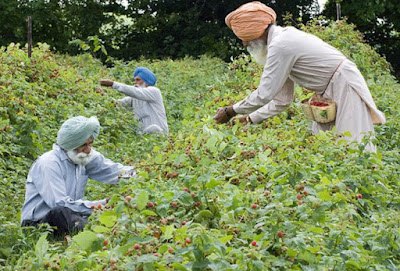 This piece originally appeared on the Spannerbook blog and is reprinted here with permission.

Scotty Hertz is the co-host of Open Sources Guelph, CFRU-FM’s weekly political news and affairs show. He has appeared on Beyond the Ballot Box, The Working Week, Election Radio and developed The Labour Show podcast for rabble.ca, one of the first of it’s kind in Canada. He has contributed to rankandfile.ca, Canadian Dimension and blogs at spannerbook.wordpress.com. Hertz is the former bass player of The Rebel Girls and can be seen with The Paper Candidates on occasion.

See also: Singh's victory was a direct repudiation of the left by the NDP -- It is pointless to pretend otherwise
Posted by Michael Laxer at 8:08 AM