Military spending: As wasteful as it is dangerous 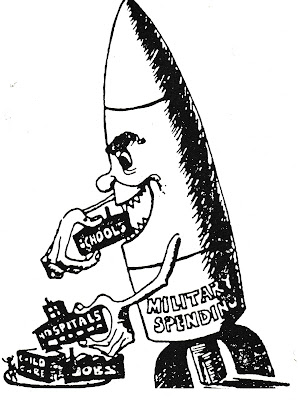 From 1984 at the height of the Cold War -- when the Reagan Administration was pursuing an extraordinarily aggressive and violent imperialist agenda centred around death squads, support of military dictatorships, the Star Wars initiative and military spending -- this cartoon reminds us just what is lost by this. The CUPE newsletter of the period that it is taken from talked about how military spending is "as wasteful as it is dangerous".

While it has long been a fundamental myth of American imperialism and its legions of media apologists that American military spending is defensive and meant to protect "freedom" and "democracy", the lie is put to that by the very fact that the US spends as much on its military as the next eight largest national military budgets combined!  At a projected $824.6 billion for 2017-2018, the US spends more annually on "defence" now than the entire world did in 1984.

Yet, despite all the claims, these increases in spending and the military adventurism it results in has never made the world a remotely safer place.

As Michael Parenti put it:


Far from being reluctantly propelled into hostilities by popular war fever, leaders incite that fever in order to gather support for their war policies. Thereby do they attempt to distract the public from pressing domestic matters, serve the overseas interests of U.S. investors, justify gargantuan military budgets, and present themselves as great leaders.

Imagine, though, what could be done for schools, hospitals and health care, fighting poverty, building housing and on and on and on with even a serious fraction of that $824.6 billion.

Canada -- long an enthusiastic lapdog that is generally keen to please its American masters -- capitulated to pressure from the Trump Administration and our Liberal government plans to increase the military budget by 70% from $18.9 billion to $32.7 billion annually by 2026-27. The Conservatives want to see even more spending and after the Liberal announcement NDP  defence critic Randall Garrison said the increases were not coming soon enough!

That $13.8 billion (never mind the base $18.9 billion)  extra annually could fund a lot of programs and initiatives that would help a lot of Canadians in direct, meaningful, real world ways.

Remember that the next time a federal politician tries yet again to claim we "just don't have the money" to fight poverty, homelessness and other injustices, or pitches an austerity, "belt-tightening" agenda.