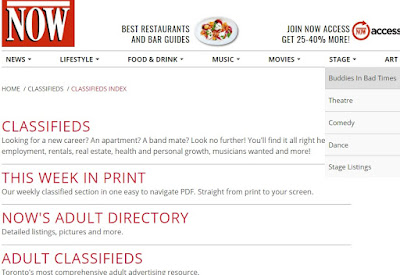 So everyone is allegedly on board with the idea that disgraceful misogynist pigs like Harvey Weinstein need to be held to account.

And yet we continue to labour under the illusion that these attitudes emerged out of nowhere.That they are not part and parcel of a society in which the bodies of women and some men are allowed to be sold and commodified for the sexual gratification of men generally. We get dealt an inane libertarian line that somehow the rules we would apply in any other context should not apply in the case of prostitution which liberals and their useful idiots like to frame as "sex work".

If you actually believe in ending misogyny and racism in the workplace and still seek to claim the extreme exploitation that is prostitution is a "job like any other" you are engaging in a willful blindness and perpetuating a fraud.

It is simply impossible to construct a framework for so-called "sex work" that would even remotely comply with labour laws let alone one that did not pander to the most debased racism and misogyny.

Never mind the facts around street prostitution -- which will not be solved by liberalizing laws at all --  all you have to do to see this reality is to simply look at the so-called "sex worker" ads in the back of that male fantasy and power enabling rag Now Magazine in Toronto.

The tiny fraction of the ads shown here all came from the Now Magazine website within one hour of midnight on Monday December 18. A magazine which has profited off these ads while publishing articles in support of them that seem to rather obviously show an editorial conflict-of-interest.

These ads are full of backward and overtly racist views. They celebrate and encourage male sexual exploitation of young women including teenagers. "Please Call Me NOW Daddy" is par for the course.

Even spending these few minutes here shows you exactly the kind of vicious, ugly, anti-woman, anti-human vision the pro-prostitution lobby is peddling.

Anyone defending the language and content of these ads has no business commenting on issues around racism, misogyny and worker exploitation at all. 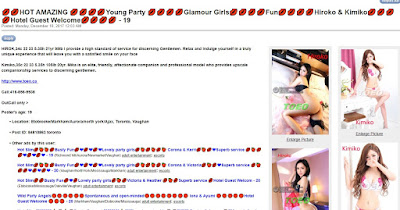 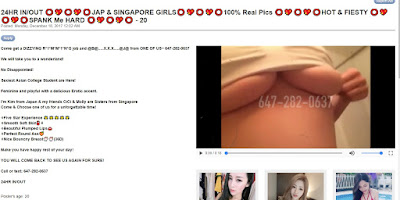 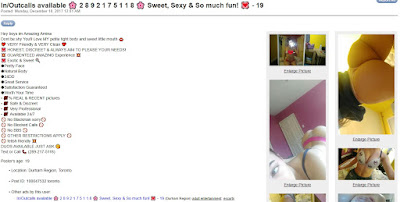 If we are serious about women's liberation,ending racism and ending a rape culture where men feel entitled to women's bodies, every single ad you see here is incompatible with that.

And as long as men and some women on the left defend this, their commitment to ending these abuses is a farce.

Posted by Michael Laxer at 8:31 PM

Email ThisBlogThis!Share to TwitterShare to FacebookShare to Pinterest
Labels: prostitution