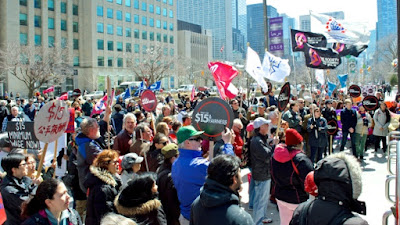 There is a persistent myth that comes up anytime governments or activists advocate for higher minimum wages: "If we raise the minimum wage inflation will go up". The implication is that attempts to improve the lives of workers at the lowest end of the wage scale will be somehow defeated or offset by this.

There are a variety of reasons that increasing the wages of minimum wage workers has an overwhelmingly positive net impact on the lives of low wage workers even were it to be true that there was a direct and clear correlation between inflation and minimum wage increases. But is there one?

Interestingly, the history of the minimum wage in Ontario provides an excellent opportunity to test that idea due to the fact that the reactionary Mike Harris Conservative government froze the minimum wage when it came to power in 1995. It remained frozen for 8 years until the Liberals won the election in 2003.

Thanks to Statistics Canada we can look at exactly what happened with inflation during the years that it was frozen and what happened after the Liberals began to raise it again.

During that 8 year span the inflation rate was 18.32% with an average annual rate of inflation of 2.12%.

In other words, inflation went down.

In other words, when the Liberals froze the minimum wage inflation went up.

In the subsequent period of 2014 to 2017 when the Liberal government again began to raise the minimum wage the inflation rate was 3.89% with a yearly average of 1.28%, lower than the period immediately prior when it was frozen.

Many things drive inflation. Certainly increasing wages and salaries will have an impact, though that also includes the wages and salaries of managers and CEOs whose wages have been going nowhere but up, without any artificial freezes, for decades.

There are also the costs of raw materials, transportation, rent, wages and conditions in the countries of origin in the case of imports, weather trends, crop failures, etc, etc. etc.

But when someone tries to tell you that minimum wage increases lead to inflation in a direct A to B sense, the recent history of Ontario demonstrates that this is not the case and it is not at all that simple.

See also: In the case of the Ontario $15 minimum wage the moral imperative is just as great as the economic

See also: From minimum wages to homelessness, New Year's scenes from the class struggle in Ontario

Posted by Michael Laxer at 8:18 AM