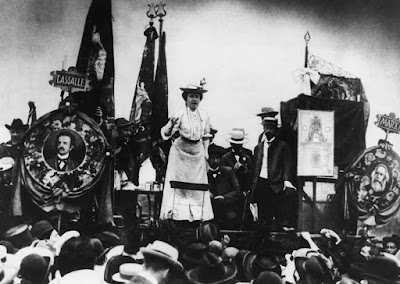 "Thus we stand today...before the awful proposition: either the triumph of imperialism and the destruction of all culture, and, as in ancient Rome, depopulation, desolation, degeneration, a vast cemetery; or, the victory of socialism, that is, the conscious struggle of the international proletariat against imperialism, against its methods, against war. This is the dilemma of world history, its inevitable choice..." - Rosa Luxemburg

On this date in 1919 the great Marxist thinker and revolutionary leader Rosa Luxemburg was murdered in cold blood along with Karl Liebknecht after an abortive attempted uprising in Germany a mere fortnight after she had participated in the founding of the Communist Party there.

In June of 1916, they had been imprisoned by the Imperial German authorities for their steadfast opposition to World War I.

They had split from the Social Democratic Party, which capitulated to nationalism and backed the war and the German war effort, and they had formed the Spartacus League in January of 1916.

Posted by Michael Laxer at 7:45 AM