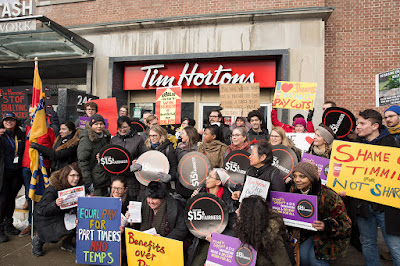 This list covers the week of  January 7 - 14. It is generally in order of the date of the article's release.


This installment has one entry from before the period. It has been integrated into the post.

Forty eight hours after setting up a hotline for workers, the Ottawa and District Labour Council said Sunday it had already heard complaints about more than 20 Ottawa businesses potentially acting as what it calls “corporate bullies” in response to new Ontario minimum wage laws.

3) TIM HORTONS BREW-HAHA SHOWS HOW THE FAST-FOOD INDUSTRY DOESN’T GET PR, ECONOMICS 101, OR WHAT CANADIANS THINK

Having quite possibly won the next Ontario general election for Premier Kathleen Wynne and her admittedly long-in-the-tooth Liberal government, the association of perpetually infuriated rogue Tim Hortons franchisees half-heartedly tried to walk back last week’s plan to beat the crap out of their employees because the government had raised the minimum wage in the province to $14 an hour. 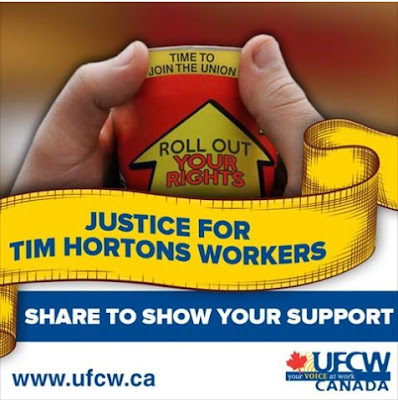 Roll out your rights! Stand with Tim Hortons workers! To reach a UFCW Canada organizer please contact our toll-free number at 1.866.977.0772 or visit www.ufcw.ca/join


4) BDS Blacklist: Sadly, Now Might Be the Time for Jews to Boycott Israel

The entry blacklist means Israel is effectively turning the screws in the prison of occupation a few notches tighter, as it continues to inch away from its self-declared commitment to being a democracy.

5) So much for 'happily ever after': Sears pensioners stagger under stress of cuts

Ron Husk pulls onto the parking lot of Home Depot in St. John's, backs his car in, and totters into another day of his part-time job as a greeter, lunch pail in hand.

American actor and comedian Jerry Seinfeld became the target of ire among Palestinian rights advocates worldwide on Monday after it was revealed he recently visited an "anti-terrorist training camp" located inside an illegal Israeli settlement in the Occupied West Bank.

A middle school language arts teacher was handcuffed and pushed to the ground in Vermilion Parish, Louisiana on Monday night after being removed from a school board meeting for questioning her district's decision to give its superintendent a raise while teachers' salaries remain stagnant and class sizes soar.

It was a terrifying phenomenon that continues to cast a shadow over certain parts of Europe even today. The great age of witch trials, which ran between 1550 and 1700, fascinates and repels in equal measure. Over the course of a century and a half, 80,000 people were tried for witchcraft and half of them were executed, often burned alive.

9) Men of Hollywood, spare us your ‘solidarity’ and actually speak up, for once in your over-privileged lives

A-list men tore up the sartorial rulebook and wore black tuxes to the Golden Globes to show their support for the women’s protest? Not enough, guys. Not enough

10) Catherine Deneuve, let me explain why #metoo is nothing like a witch-hunt

There is nothing puritanical about the belief that sexual liberty is the right to determine your sexual behaviour without coercion.

Last night, I made cinnamon rolls. I’m not a huge fan of cinnamon rolls, per se, but this recipe was included in Mario Batali’s sexual misconduct apology letter, and so I feel compelled to make them. Batali is not the first powerful man to request forgiveness for “inappropriate actions” towards his coworkers and employees. He is not the most high profile, and he is ostensibly not even the worst offender. But he is the only one who included a recipe.

12) I’m not here for celebrity culture, but I am here for Oprah

I don’t want a celebrity-driven, Hollywood-centric movement. I don’t want a movement that fails to address race and class. But that doesn’t mean I don’t want women who are actresses, who have money, or who are “celebrities” to speak out and to declare solidarity with other women. It certainly doesn’t mean I don’t want a woman like Oprah, who is powerful, who has changed lives, and who, on Sunday, used that power to speak about real women and real women’s lives — women who have historically been silenced. This was — and is — an important moment. Not everything needs to be torn apart in order to advertise progressive credibility. Sometimes good things and powerful moments can be celebrated — and this is one of those times.

13) The Lefty Critique of #TimesUp Is Tired and Self-Defeating

This year’s Golden Globes were the best kind of anomaly, as women artists and activists took it over with #TimesUp, signaling an end to silence and inaction on sexual harassment and abuse. All the women wore black; men sported #TimesUp pins. Seven celebrity actors took women activists of color as their dates to raise the visibility of particular industries and communities. The campaign has raised more than $16 million for a legal defense fund. Several winners spoke to the issue (though none of them were men), and the night ended with Oprah Winfrey’s focused and moving acceptance speech for the Cecil B. DeMille Award.

After weeks of protest and a petition signed by tens of thousands of people, Toronto Mayor John Tory reversed his refusal to ask that the Moss Park Armoury be opened as an emergency homeless shelter: temporarily transfiguring an edifice of war into a space of refuge.

The Communist Party warns Venezuela could be headed towards a social explosion if the Maduro government fails to take decisive steps to improve the conditions of working people.

15) Jeremy Corbyn is about to transform the Labour party – again

Not many people will have noticed the news, reported on Monday morning just as Theresa May’s ill-fated reshuffle began, that Jeremy Corbyn has set up a “community campaign unit”, a small but growing department in his office that will focus on organising with communities and groups of employees, helping them to campaign on local and workplace issues.

16) 'He took every penny I made,' human trafficking survivor says

A survivor of human trafficking now speaks to other women and teenagers in high schools about the risks.

17) What's the Deal with Men's Rights Activists and Asian Fetishes?

There are plenty of men out there who think Asian women represent some kind of super patriarchal vision of a mate—a woman who is both subservient and hyper-sexual. And until we address that problem, there will be plenty of other men like Bond, and scores of fans willing to pay good money to learn how they too can fly to Asia and pick up women. Sigh.

Women working full-time in Canada earn 74.2 cents for every dollar that full-time male workers made.

Read the transcript/listen to the segment.

The Trump administration plans to loosen constraints on the use of nuclear weapons and develop a new low-yield nuclear warhead for US Trident missiles, according to a former official who has seen the most recent draft of a policy review.

Ahed and Nabi Saleh have shown that popular unarmed resistance – if it is to discomfort Israel and the world – cannot afford to be passive or polite. It must be fearless, antagonistic and disruptive.


Most of all, it must hold up a mirror to the oppressor. Ahed has exposed the gun-wielding bully lurking in the soul of too many Israelis. That is a lesson worthy of Gandhi or Mandela.

WHITE HOUSE CORRESPONDENTS who routinely allow the president of the United States to repeat false claims unchallenged should study the footage of how their Dutch counterparts greeted Donald Trump’s new ambassador to the Netherlands on Wednesday.

Pete Hoekstra says statements about Muslim migrants in the Netherlands were ‘simply wrong’ after last month telling a TV interviewer they were ‘fake news’.

OFFICIALS AT A privately run Immigration and Customs Enforcement detention center in rural Georgia locked an immigrant detainee in solitary confinement last November as punishment for encouraging fellow detainees to stop working in a labor program that ICE says is strictly voluntary.

Marianela Quinlan's 15-year-old child used to be able to sample a free donut or Timbit when working at a Tim Hortons in Dundas.

But in the wake of the province's higher minimum wage requirement, that perk is gone – along with her child's two paid, 15-minute breaks for every eight-hour shift. They've been replaced by a 30-minute unpaid lunch break.

Two Chavista leaders have been murdered in the past four days in what could prove to be a new round of political violence.

28) Israeli Minister on Gaza Rocket Fire: The Time Has Come for Dead Palestinians

Minister Uri Ariel said Wednesday that there needs to be more dead and wounded Palestinians in Israel's attacks on the Gaza Strip.

Communications Minister Ayoub Kara sparks controversy as he calls for death for propagators of fake news and speaks out against African migrants as Israel launches deportation plan.

31) If authoritarianism is looming in the US, how come Donald Trump looks so weak?

There’s little doubt that Trump’s regime is a cause for concern. But fears about authoritarianism in the US ignore political realities.