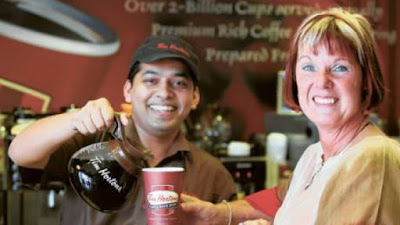 As 2017 ended we got to witness the odd spectacle of the political lackeys of the ruling class assembling to pay homage to Canadian billionaires Barry and Honey Sherman. This was despite both the shocking and unresolved nature of their deaths and the long history that Barry had using his so-called "philanthropy" as a political and corporate bully pulpit. The most notorious example of this was the attempt by Sherman's company Apotex to destroy the career of Dr. Nancy Oliveira. Sherman at the time of his death was also trying to quash an investigation into allegations he broke lobbying rules when hosting an election fundraiser for our now Prime Minister Justin Trudeau.

"“One gets a sense of their political influence by who turned up at the memorial service — the words from the Prime Minister, from John Tory,” Jim Turk, executive director of the Canadian Association of University Teachers in 1999, told the Star."

As Turk noted, among those paying tribute was Toronto's silver spoon faux-centrist Mayor John Tory whose ego it appears became entwined with his totally irrational initial opposition to asking the federal government -- despite its expressed willingness to do so -- to allow the city to use the Moss Park armoury as an emergency shelter for the homeless during the city's brutal Christmas cold snap. After losing his cool on CBC Radio ranting about how wrong-headed activists for the homeless with hands-on experience like Cathy Crowe were -- and convincing some City Councillors to come along for the ride -- Tory was eventually forced to do what should have been done weeks before, which was exactly what the much maligned activists had advocated for.

Of course, within mere hours of the dawn of 2018 CEOs were already bringing home record compensation for their golf course and private jet laden toil. As the Toronto Star noted on New Year's Day:

It’s three minutes to 11 in the a.m., the first working day of the New Year. You are about to purchase your second cup of coffee. There you are, standing in line, counting nickels. Perhaps you are contemplating the runaway costs of the seasonal festivities just past. Perhaps you are despairing of the way your income has not budged in years. Perhaps you’re trying to remember whether any payroll deductions are front-end-loaded at the beginning of the year and whether the employee costs of any benefits have been bumped higher for 2018. How skinny will that first paycheque be?
Let’s add this: as of 10:57 a.m., the average CEO who has made it into the ranks of the top 100 chief executives in the land will have earned what the average Canadian worker will make in the entire year.

The cup of coffee tale would prove oddly prescient when it turned out that a Tim Horton's franchise in Cobourg, Ontario had decided to thank their "team members" (i.e. employees making less than $14 an hour) for their last year of labour with the following letter in response to the January 1st minimum  wage hike in the province: 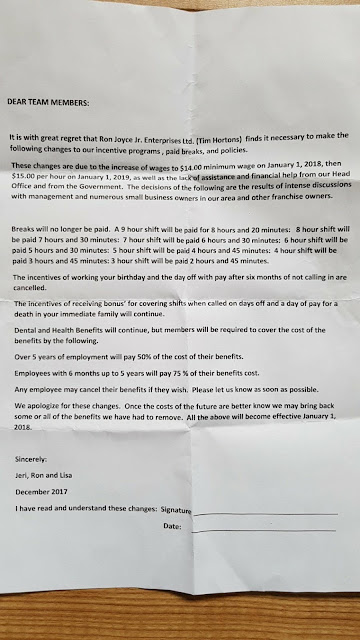 Note that the "Ron" at the bottom of the letter is Ron Joyce Jr., son of the chain co-founder Ronald Joyce who in 2013 made Forbes Magazine's list of "Notable Newcomer" billionaires. Hardly a "Ma and Pa" "small business" owner, but then none of these franchisees (who in Tim Horton's case are under the corporate umbrella of Restaurant Brands International)  are as we shall see further on.

The rationale is also nonsense. As Will Ashworth wrote in "The Motley Fool":


The move by the founders’ kids is nothing more than a cash grab; Restaurant Brands, in my opinion, has a moral and ethical obligation to intervene.
Consider the average employee was making $13 per hour before the hike. Let’s say that employee works 40 hours per week. That’s $27,040 annually over 52 weeks before taxes and deductions. Typically, benefits represent an additional 20-50% of an employee’s annual wage, which means at the high end, they would cost the franchisee $13,520 per year.
So, prior to the minimum wage hike, the average employee working 40 hours cost the franchisee approximately $40,560. Given the implementation of these cuts in conjunction with the wage hikes in 2018 and 2019, a 40-hour employee will cost them $32,500 in 2018 and $34,580 in 2019, a two-year savings of $14,040 without taking into consideration employee breaks, which will no longer be paid.
Apparently, other incentives offered previously have been withdrawn, such as working on your birthday and working six months without a sick day.
The franchisee blames both Tim Hortons’s head office and the provincial government for failing to provide financial assistance during the transition. However, the $2 minimum wage hike is being implemented over 24 months. That’s a cost of $173 per employee per month, or approximately 40 minutes in wages paid out per day, the same amount of unpaid breaks for a nine-hour work shift.
In other words, it’s a wash before taking into consideration employees are now footing 50-75% of the benefit costs...

...The people who can least afford to lose — the staff — are going to be the ones left holding the bag, while Horton-Joyce and Joyce Jr. enjoy the warm weather at their Florida home.

Another attempt to cry foul that a "small business" was getting hurt by the higher minimum wage (among many) can be seen in this Little Caesar's notice at a Simcoe outlet purporting to be from the franchise "staff":

So just what kind of "small business" are we talking about here?

Little Caesar's is the third largest pizza chain in the United States with sales of over $3 billion. In Canada potential franchisees are advised:


The estimated initial investment required per franchise location ranges from approximately $245,000.00 to $410,000.00 for a standard Little Caesars carry-out location.  Of course, costs vary based on a variety of factors.

Tim Horton's is owned by the giant parent corporation of Restaurant Brands International that also owns Burger King and Popeye's. They did over $1 billion in sales in the second quarter of 2017 alone. Tim Horton's itself is the largest fast food chain in Canada, operates across the United States and is expanding globally into markets like Spain.

To even be considered for a franchise an applicant must have a minimum of "$1.5 million in net worth and $500,000 liquid assets in order to qualify." Franchisees can expect an initial minimum franchise cost of $480,000 to $510,000, of which a minimum of $153,000 must be unencumbered cash or liquid assets and are required to have an additional $50,000 in unencumbered working capital.

Only in the most distorted sense of the term (as we saw with the fiasco around attempts to reform "small business" taxes) can these be seen as "small businesses". Forgive me if I am playing the world's smallest violin when these owners try to use much needed higher and fairer minimum wages as an excuse to gouge employees and customers.

See also: Don't be fooled -- The campaign against so-called small business tax reform is class warfare by the wealthy
Posted by Michael Laxer at 11:16 AM