Toronto police say the sky is falling -- Is the CBC their Chicken Little? 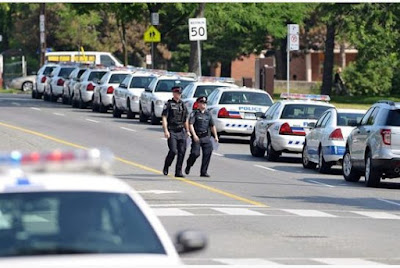 As 2018 dawns -- an election year in Toronto and Ontario -- Toronto police officers and their "union" appear to be launching a media offensive to counter attempts to modernize the police force and to reign in outrageously out-of-control spending on the force (which now tops a billion dollars a year in the city). While unstated a secondary goal is clearly to try to get Toronto's residents and media to rally around a force hurt by allegations of abuse and systemic racism with incidents like the Sammy Yatim killing, the seeming attempts to cover-up the involvement of a Toronto police officer in the beating of Dafonte Miller and the grossly abusive and racist practice of "carding".

The ramping up of this offensive was seen very clearly at the end of this week with CBC radio and news airing two reports based on anonymous sources claiming that Toronto police are now understaffed to the extent that they are in grave personal danger as individual officers and that they are not able to properly respond to emergency calls. One was from the wife of an officer apparently worried about her husband and the other was a long interview by radio host Matt Galloway with a veteran officer (a staff sergeant) who made a variety of claims also along these lines.

While the use of anonymous sources is a time-honoured journalistic tradition that allows people to speak out with less fear of reprisal, the assertions in these two reports, most especially the interview with the veteran officer, were not challenged in ways that left this listener scratching his head.

The staff sergeant, for example, provided (details absent) only very anecdotal evidence such as claiming they were unable to respond to a break-in and then hyperbolically claimed that the Toronto police would be unable to respond to a mass shooting like the Danzig shooting a few years ago and further implied that the city might have to eventually turn to the military to keep the streets safe!

That is a pretty gigantic rhetorical leap that was based on no actual numbers or serious evidence and that Galloway allowed to go basically unchallenged. I can provide personal examples from years ago, well before any modernization was underway, of police taking a very long time to respond to break-ins (which are not always the top priority) including one involving a close friend where the suspect was on sight for a very significant amount of time at his neighbour's house and he had to personally intervene to prevent the suspect's escape when police failed to arrive. Should I have conflated this at the time to mean that Toronto did not have enough police officers and that the police would not have been able to respond to more serious calls (which is presumably exactly what they were doing)?

Is there any evidence whatsoever that there are no longer enough police to respond to a serious emergency that is not of the completely anecdotal variety the staff sergeant provided? I have not seen any to date. In fact, all the "evidence" of these alleged issues has either been of the type in the interview or based on internal emails or "exit surveys" of officers themselves. This is happening against the backdrop of the police association and its deeply reactionary leader Mike McCormack threatening job action over the changes this year.

This would appear to make the claims at least worth further investigation to see if they are justified and not part of propaganda campaign to manufacture a policing "crisis" in Toronto so as to derail reforms that are long overdue.

These largely unsubstantiated allegations in this very political context are undermined further when we hear the anonymous staff sergeant during the interview claiming that criminality was increasing and getting worse in Toronto which is demonstrably untrue. He uses this to say more crime means we need more officers as if this is an A to B proposition, which it is not given that not all crime requires the same level of police response. This is clearly meant to imply that cutting the number of officers on the force by 300 by 2019 will cause the sky to fall and unleash anarchy in our streets.

The problem for this narrative, which again went basically unchallenged by Galloway, is that while year-to-year crime stats vary in relatively meaningless ways, the trends in crime in Toronto and Canada are clear and they are all going in one direction: DOWN. And not just down, but way down.

The Crime Severity Index in Canada, for example, is down rather dramatically by 29% versus a decade ago (it is down by even more than that if you go back further). The overall crime rate is down by 28%.

Further Toronto has one of the lowest (not highest) violent crime rates among Canada’s largest cities (let alone North American cities generally) and has had for many years. Of  15 of the largest cities in Canada in a recent survey "Toronto has the lowest crime rate...and the city’s homicide rate of 1.55 is less than the homicide rate in St. John’s, Regina, Saskatoon, Halifax, Ottawa, Winnipeg, Calgary, Vancouver and Edmonton."

These facts need also to viewed in conjunction with the reality that many marginalized and racialized communities in Toronto have been historically over-policed.

The Toronto police, their association and many of their members have a rather obvious and clear vested interest in preventing reforms that would cut into their grotesquely bloated budget that, until recently, Toronto politicians have been too scared to touch.

It would seem that the CBC is more than happy to provide a platform for them to try to do just that.

See also: The Sammy Yatim killing -- Consequences for police violence are what is "necessary for public confidence in the administration of justice"

See also: It is not just the police spending in Toronto that is out of control -- it is the police themselves

See also: You cannot 'discriminate' against the police. They are agents of discrimination.
Posted by Michael Laxer at 9:25 AM