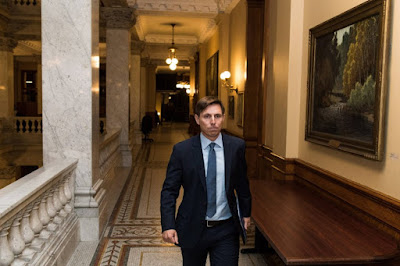 This list covers the week of  January 21-28. It is generally in order of the date of the article's release.


This installment has three entries from before the period. They have been integrated into the post.

1) Let's call the pro-lifers what they are: pro-death

2) The Fake Feminism Of The #MeToo Backlash

The #MeToo backlash ― much predicted, fitfully rehearsed ― arrived in earnest this week, disguised as feminism. The pretext: a messily written story published on Saturday on Babe.net, about a woman’s coercive sexual encounter with comedian Aziz Ansari.

3) Naomi Parker Fraley, the Real Rosie the Riveter, Dies at 96

4) Ursula K. Le Guin, Acclaimed for Her Fantasy Fiction, Is Dead at 88

Ursula K. Le Guin, the immensely popular author who brought literary depth and a tough-minded feminist sensibility to science fiction and fantasy with books like “The Left Hand of Darkness” and the Earthsea series, died on Monday at her home in Portland, Ore. She was 88.

For a lot of hockey fans, that’s a slap in the face. It’s another sign that all these initiatives and fancy nights where players use rainbow sticks during warmups mean little until the rest of the league’s actions back up its words. The idea of celebrating Hockey Is For Everyone month days after having a Michigan native who loves the Confederate flag play your marquee event is dumbfounding.

We didn’t want to believe the woman from north Tel Aviv who told us about the segregation. We thought she was imagining things when she said there are separate preschools for black and white children in the Tel Aviv neighborhood of Tzahala. But she was insistent. So we went to the Tzahala preschool compound and kept going back and forth between the classrooms as the unbelievable sights gradually sank in: One preschool was filled with white children; the other with black children. In Israel, 2018.

When the provincial government introduced hourly minimum-wage legislation in 1963, opponents of the move predicted doomsday scenarios. Diners going under. Staffing reductions. Costs passed on to consumers. Implementation of minimum tabs. And, worst of all, the demise of the 10-cent cup of coffee, a staple since the Second World War. “After all,” Dalton Waller, president of the Canadian Restaurant Association, observed in an interview with the Toronto Daily Star, “this is an industry that takes in many unskilled people, folks who don’t speak the Queen’s English or any English.” Waller also warned: “You start paying it to the fellow who does menial tasks and pretty soon everyone above him feels they ought to get more too.”

8) If Denmark has no minimum wage laws, should Canada follow suit?

The Communist Party of Canada (Ontario) has produced a comprehensive submission to Ontario’s 2018 Pre-Budget Consultations, calling explicitly for an end to austerity and privatization, and demanding a budget for full employment, expanded public services, equality, and progressive tax reform. The CPC(O) notes the devastating impact austerity policies have had on the working class – rapid and widespread growth of precarious employment, plant closures resulting in over 8000 jobs lost, lost wages and benefits, deep cuts to programs, and soaring costs for services including child care and tuition. At the same time, corporate profits have spiked, rising from $156 billion in 2008 to a projected $306 billion for 2017. Profits The Royal Bank of Canada alone announced a profit of $11.5 billion for the third quarter of 2017.

A CHORUS OF VOICES from the Caribbean island of Barbuda is accusing Robert De Niro of being part of a backroom effort to exploit a devastating hurricane to fundamentally change the island’s communal land ownership law in the interest of developers — changes opposed by many Barbudans, but which could aid the actor’s controversial plans to build a large luxury resort called Paradise Found Nobu.

11) Men Only: Inside the charity fundraiser where hostesses are put on show

A furore has erupted over a men-only fundraising dinner in London for the Presidents Club charity after an FT investigation revealed hostesses at the event were groped, sexually harassed and propositioned. Here is the FT coverage of the event and its aftermath.

A CEO from one of the world's top five global fashion brands has to work for just four days to earn what a garment worker in Bangladesh will earn in an entire lifetime, campaigning group Oxfam International said Monday.

13) Is There A Ticking Time Bomb Under The Arctic?

A short drive north of Fairbanks, Alaska, there's a red shed stuck right up against a hillside. The shed looks unremarkable, except for the door. It looks like a door to a walk-in freezer, with thick insulation and a heavy latch. Whatever is behind that door needs to stay very cold.

14) If you're going to blame a cyberattack on North Korea, you better show your work

Figuring out who's behind a cyberattack is hard — something that cybersecurity experts will tell you time and time again.

As per the trend so far, it will become increasingly abusive and violent in order to remain relevant and profitable, and what for? We don’t need pornography, and nor should we want it. Sexual exploration can happen between two adults without the prior need for a video of a poorly paid (increasingly young) woman suffering physical and verbal abuse to “inspire” us. If third-wave, liberal leftist men truly believe in equality, then it’s high time they start rejecting the things that only reinforce inequality. It’s time we start expecting more for ourselves, and better of ourselves.

The ex-quarterback and four other players are finalists for the NFL Players Association’s (NFLPA) Byron “Whizzer” White Community MVP award, according to NBC Sports. Surprisingly, Kaepernick was named a nominee after spending the entire season as a free agent. Contrastingly, the NFL announced, on Tuesday, its “Let’s Listen Together” campaign – which was launched to highlight a commitment to social justice and equality, but without a single reference to Kaepernick.

18) White Evangelicals, This is Why People Are Through With You

I know it’s likely you’ll dismiss these words. The fact that you’ve even made your bed with such malevolence, shows how far gone you are and how insulated you are from the reality in front of you.

King Street is open, but the time where business owners could bully the city is hopefully coming to a close. If these businesses can't keep up with the changing city, so be it. They shouldn't be allowed to drag commuters down with them.

Building on the student-led mass protests of 2006 and 2011, a newly forming leftist coalition in Chile is well-positioned to challenge Sebastián Piñera’s incoming right-wing administration.

Companies which do not recognise trade unions are among those which could be stripped of public sector contracts under a Labour government.

Jamie Baillie has been forced out as leader of Nova Scotia's Progressive Conservative Party following an investigation into "allegations of inappropriate behaviour."

Patrick Brown allegedly made sexual advances toward a teenage staffer who was drunk and nearly half his age during his time as a federal MP, according to one of two women whose accusations of sexual misconduct led to his resignation as leader of Ontario's Progressive Conservative Party early Thursday.

25) Why did Patrick Brown evoke his sisters in his defence?

Why do men need their daughters and sisters and wives to serve as moral compasses? Why do they view women as relationally earning the right to protection? Shree Paradkar writes.

John Ibbitson, The Globe and Mail

But the public square is not a court. And everyone of good will stands today with those who say: Enough. No more. No more fine words and fancy declarations that protected no one. No more lip service to equality, even as the man presses himself against the girl or boy – frozen, terrified, not knowing what to do.

Adam Radwanski, The Globe and Mail

Politics is not a court of law. People who seek jobs at the highest level of public life do so knowing they will be held to a higher standard. Mr. Brown's implicit promise to his party, when he sought its leadership, was that he could meet that standard. They now have specific evidence he could not.

Fedeli, 61, was selected by the PC caucus during a morning meeting and it’s not immediately clear if he will stay on to fight the spring election at the head of the party.

Federal Sport and Disabilities Minister Kent Hehr has resigned from cabinet pending an investigation into allegations of sexual harassment.

“I can’t go home tonight, because I’m worried about what will happen to me,” Raworth said Saturday.

The GOP understands how important labor unions are to the Democratic Party. The Democratic Party, historically, has not. If you want a two-sentence explanation for why the Midwest is turning red (and thus, why Donald Trump is president), you could do worse than that.

Hungary’s main Jewish organization lashed out Wednesday against a senior member of the ruling Fidesz party for participating in a memorial for a Nazi-allied wartime leader to be held on a Holocaust remembrance day.

The lower house of the Polish parliament has approved a controversial bill that would forbid any mention of participation of the "Polish nation" in crimes committed during the Holocaust. The bill would also bar use of the term "Polish death camp" to describe the death camps where Jews and others were murdered in Nazi-occupied Poland during the Second World War.

Labour will buy every homeless person in the UK a house if the party is elected, Jeremy Corbyn has announced.

Posted by Michael Laxer at 9:33 AM