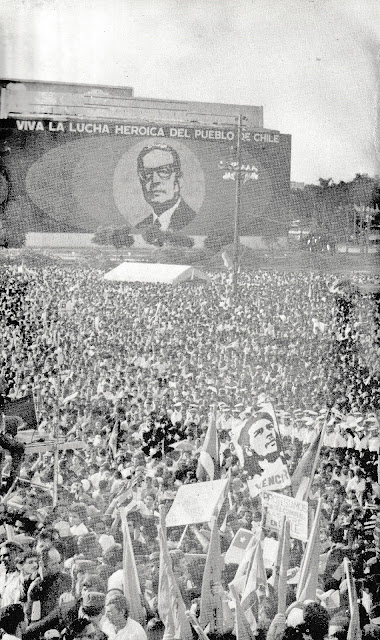 Today marks the anniversary of the American backed fascist coup in Chile (September 11, 1973) that overthrew the democratically elected leftist government of Salvador Allende and plunged the country into a vicious military dictatorship.

Allende fought to defend La Moneda (the Presidential Palace) and died rather than go into exile.
Before his death he gave one final speech to the Chilean people that ended:

"Workers of my country, I have faith in Chile and its destiny. Other men will overcome this dark and bitter moment when treason seeks to prevail. Go forward knowing that, sooner rather than later, the great avenues will open again where free men will walk to build a better society.

These are my last words, and I am certain that my sacrifice will not be in vain, I am certain that, at the very least, it will be a moral lesson that will punish felony, cowardice, and treason."

(Image from a rally dedicated to solidarity with the Chilean people and in honour of Salvador Allende, 28 September,1973 in Havana, Cuba)
Posted by Michael Laxer at 6:46 AM