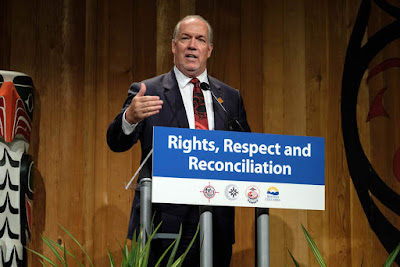 December and January saw 46 posts on The Left Chapter of various kinds. We looked at things like Lift Every Voice! The People's Song Book 1957 f. Paul Robeson, the Toronto Police and their CBC Chicken Littles, The Rent Collection Courtyard Sculptures -- From feudal oppression to Communist revolution in China and Zippy Pickle Soup.

There was also our annual countdown, The 20 Best Songs of 2017 ft. Hurray For The Riff Raff, Arcade Fire, Jay-Z, Jessie Reyez and more!

Without any further ado, here are the top six posts, in terms of hits, from December and January.

By now the news that the British Columbia NDP government has betrayed the (sorta) promise it made to stop the building of the Site C dam is rippling like a shock wave through those New Democrats left who still take the party's pledges and claims to be a real alternative seriously.

In the federal NDP timeline, we find ourselves at the beginning of a new year in 2018, rounding up the first quarter since the federal NDP leadership race four months ago that was ultimately won by Jagmeet Singh on the first ballot.

4) From minimum wages to homelessness, New Year's scenes from the class struggle in Ontario

Only in the most distorted sense of the term (as we saw with the fiasco around attempts to reform "small business" taxes) can these be seen as "small businesses". Forgive me if I am playing the world's smallest violin when these owners try to use much needed higher and fairer minimum wages as an excuse to gouge employees and customers.

As the somewhat freshly minted, seatless leader of the federal NDP, Jagmeet Singh is on a continuing mission to “visit communities to build momentum for the party’s brand and ideas” whilst compiling an extensive photo op folder. Singh is as photogenic as Trudeau Jr., perhaps more so, with social media forever bringing an end to the previous political style era of tragic comb overs, rumpled Eaton’s blazers and public smoking. Singh’s recent foray into the fruit and vegetable mines of southwestern Ontario was a beautifully framed masterpiece of visual symmetry; the eager well manicured rookie stands tall among the irrigation hoses, nary a leaf out of place. This image suggests at any minute he will be shedding the jacket to fill the flats behind him to the brim, ready for shipment by the skid load to warehouse shopping members nationwide. Undoubtedly on this day the ventilation system was cranked full bore before his arrival and the insecticide spraying put on hold for a while. The temporary foreign workers have been cleared off and given a brief respite from their work while their potential saviour gets the perfect shot for the growing Instagram portfolio. Was their pay docked during the stoppage?

6) Have minimum wage increases in Ontario demonstrably driven up inflation? No.

There is a persistent myth that comes up anytime governments or activists advocate for higher minimum wages: "If we raise the minimum wage inflation will go up". The implication is that attempts to improve the lives of workers at the lowest end of the wage scale will be somehow defeated or offset by this.