The Courage to Leap comes far too late to matter 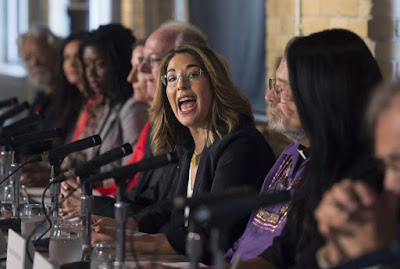 A "revolution" is coming to Ottawa!

I know, it is exciting and unexpected right?

And, unless you suddenly think that revolution has become a meaningless word it is also not happening at all.

The "revolution" is the celebrity tour show of the do-nothing Leap Manifesto crowd combined with some nebulous new "left alternative" within the NDP apparently called "Courage". They call themselves this despite never having had the courage to take stands within the NDP when it might have mattered.

In other words, when there were actual candidates running in an actual leadership race one of whom, Niki Ashton, clearly aligned with their alleged politics far more than any other they did nothing.

But getting behind an actual candidate is a diversion from the celebrity nonsense, so, needless to say neither of the courage or leap types had the courage to take a leap and support a candidate.

Now, four months after the NDP leadership race has ended these press conference dilettantes have decided the time is right to do more of nothing by holding a meaningless meeting in conjunction with an irrelevant NDP "policy convention".

We all know how important policy conventions have been in framing NDP electoral agendas in the past. We all know how unimportant this vanity exercise by Leap folks will be on impacting anything the NDP does.

But they got some good press.

Here are the facts.

Leap was launched as a celebrity appeal to power vanity exercise.

The Leap and Courage folks abandoned the field when it might have mattered during the leadership contest.

They have shown a total incapacity to understand how basic organizing works and if they want to compare themselves to Bernie Sanders or Momentum in the UK they have entirely missed the point. They should be ashamed to even mention these groupings as they have done nothing remotely analogous to what they did.

In fact, they have done nothing at all outside of planning all star moments. They have placed themselves completely outside of even the relevant struggles in Canada like the fights for affordable housing or the $15 Now fight.

When, exactly, did Leap or Courage take on the centrist leadership of the NDP in any way remotely comparable to what happened in the US with Sanders let alone the UK with Corbyn?

The answer, of course, is never.

Now these courageous folks are taking the leap of holding a meeting that you can buy tickets to right before an NDP convention that will not have anything at all to do with their alleged agenda.

They will pontificate with no possibility of accomplishing anything, which was likely at least subconsciously the desired result

If you have ever wanted a snapshot of why the left in Canada is a joke, here it is.

Posted by Michael Laxer at 9:14 PM