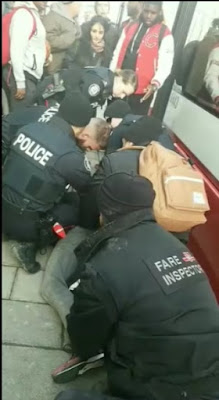 What happens when a City Council and transit service try to scapegoat riders for the system's ills, greatly exaggerate the significance and impact on the system of alleged "fare evasion", and even muse about requiring children to carry cards to prove they should get the free fare that they are entitled to?

Well, one predictable result is that a number of rent-a-cop fare inspectors are hired and get it into their heads (or are told) that they are there to aggressively confront and "catch" riders -- including young people -- who are supposedly evading fares that are at most $3.25 and can be $2 or even free (in the case of kids 12 and under), leading to incidents of grotesque overreaction.

In fact, we predicted it!:


This new system [of fare enforcement} will be backed up by TTC security that are paid handsomely to police the minuscule problem of fare evasion, basically guaranteeing abusive and confrontational interactions between fake cops and children and their parents.
Anyone who thinks this new regime of crass fare intimidation will have an equal impact across social, class and community lines knows little about them.
This is truly, deeply, madly wrong-headed and is a sad reflection of how desperate Councillors and the Mayor are to deflect their terrible decision making and boondoggles -- like throwing billions away on a single stop subway extension -- by making kids the target.

Lo and behold, yesterday two TTC fare inspectors seemed to go "above and beyond" by physically confronting a black 15 year old transit rider who was apparently trying to exit the vehicle he was on when one of the 'officers' "grabbed him by the back of his coat and dragged him back into the vehicle".

Remember that this was over what would have been an attempt to determine if he had "evaded" a $2 fare.

From there things deteriorated with the inspectors apparently dragging him off the vehicle (that he had been attempting to leave) and pinning him to the ground. The actual police were contacted and arrived at the scene.

Part of the incident was captured on video by Bethany EJ McBride.

You can watch it below.

You can read more details on CP24, the Toronto Star and her Facebook page.

Once the police had arrived and talked to the young man he was promptly released (but only after having been handcuffed) because he had not "committed any criminal offence".

So why was he grabbed, then dragged off the vehicle and pinned to the ground in the first place?

Given how confrontational this was, one wonders how many incidents of intimidation of youth have occurred that would have been terrifying or unpleasant for them but that did not go quite this far and were never heard about.

The TTC is investigating and these 'officers' may well be disciplined, but either way, the incident points to a troubling fact.

That is that if you create a narrative where "fare evasion" is supposedly a major issue (despite the fact that even those who see it as a serious problem admit that 96-98% of riders are paying exactly as they are supposed to), and where pseudo-cops are hired and tasked with bothering and confronting riders on crowded vehicles -- the vast, vast majority of whom have done nothing wrong -- outcomes like this one are inevitable.

And as we noted before, anyone who thinks that a new or more aggressive regime of fare intimidation will have an equal impact or be equally or as confrontationally applied across social, class and community lines is totally out-to-lunch.

Posted by Michael Laxer at 7:16 AM