Horwath's campaign announcement a failure to differentiate for the ONDP 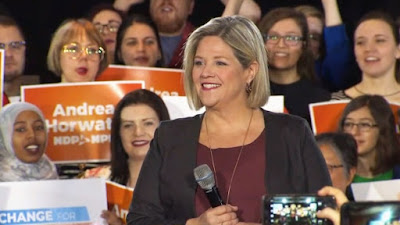 Andrea Horwath held a rally early Saturday that can only be described as a de facto campaign launch what with so little time ahead before the June provincial election.

It was fairly typical of such events with a partisan crowd of presumptive supporters and an admittedly solid delivery from what is now a seasoned campaigner. Under the rather pedestrian slogan of "Change for the Better" Horwath announced five major platform planks that the ONDP  apparently plans to make central to their pitch to become the next government.

Some of these were more interesting than others. The pledge to make Hydro in the province fully public again is certainly a standout and contrasts well with the Wynne government's terribly shortsighted partial privatization of the utility. The pledge to convert post-secondary student loans to grants was also a positive one.

On the other hand the pledge to "end hallway medicine" means little other than as a slogan and the details around what this implies and how this would be achieved were rather scant.

As to the platform planks getting the most attention -- those that are being spun as promises for "universal" pharmacare and dental care -- these both sound much better at first than they seem to under scrutiny.

To begin with, as I have pointed out on The Left Chapter before, the NDP appears to be continuing to promise to cover, in full and for all Ontarians, the 125 generally most commonly used drugs starting the year 2020, and to then include more on an as yet undefined timeline. This would cost, according to the NDP, about $475 million annually.

This is not pharmacare in any meaningful sense of the term and excludes most of the most expensive drugs that drive people to bankruptcy. It also has to date neglected to take into account or deal with the fact that the Wynne government introduced an OHIP+ plan, already in effect, that covers over 4,000 medications in full, for everyone in Ontario 24 years old and under.

What this means is that Horwath and the ONDP either has to keep the existing plan and then drop coverage to only 125 drugs when you turn 25, or they plan to scale back the existing plan to 125 drugs for those under 25. While one would assume that a social democratic party would do the former as opposed to the truly awful latter this has yet to be made clear and the incorporation of the OHIP+ plan into the NDP's version of pharmacare would almost double its cost.

Meanwhile the dental care plan does not appear to be universal at all, but rather a means-tested, income based approach that would cover some or even many of the uninsured. This is problematic on a number of levels, of course, and certainly belies the positive headlines that the ONDP managed to get out of it.

All in all these are a few positive, mildly social democratic announcements and we will see where they go when the full platform is released. Whereas some, rather fancifully,  are calling this a shift to the "left" by the ONDP it is hard to see how in the changed context of this election and other than in conditions where "left" really has little meaning anymore.

If this is a "left shift" it is an extremely minor one and one that goes nowhere near far enough in differentiating  the ONDP from the Liberals, especially given the Liberal legislative shift of the last few months. This differentiation is truly important to attempt to make going into an election that is very likely to be a "strategic voting", anti-Ford election for many progressive voters. .

The problem for the ONDP is that a Ford PC leadership actually puts the juxtaposition between the Liberal policies of the last year and the threat of Ford into very stark contrast.

No one, other than the delusional, think Wynne and Ford are remotely akin to each other. There is far more that politically separates the Conservatives led by Ford and the Wynne Liberals than there is that separates the Liberals and the NDP and only the intellectually dishonest would dispute this. (This is not meant as a compliment to the Liberals so much as a reflection of the liberal centrism of the ONDP).

Some of the ONDP's partisans have even tried to frame the Ford triumph as representing a real "chance" for the ONDP, which is bizarre and misguided as to the progressives the ONDP are targeting Ford is not seen as an opportunity, he is seen as terrifying.

The narrative about this election (which has already begun) is going to be "stopping Ford" for many, many progressive "swing voters". That Wynne is down in the polls now, and may continue to be heading into the election, does not mean this will continue with a poorly framed strategy on the part of the NDP.

The path for the NDP, both politically and morally, would seem to obviously be to back a serious, clearly left agenda that can truly contrast with the recent Liberal "progressive" one. The Liberals have delivered some significant reforms that impact on the lives of people in very direct ways, and given that Ford is likely to roll some or many of these back, the ONDP needs to make a clear case as to why they should be seen as the real, "better" alternative to Ford -- strategic voting considerations aside -- than the actual government and its existing legislation

While the ONDP's supporters may have seen that today, I don't think anyone else did.

See also: Rehabilitating Andrea Horwath's leadership and the danger of a short political memory
Posted by Michael Laxer at 7:31 PM