If Doug Ford won, what does it mean for Ontario? 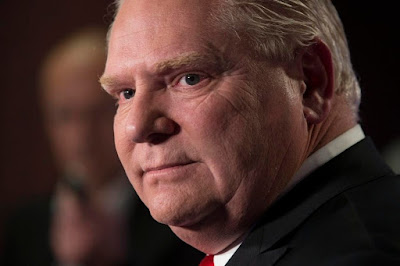 The apparent victory of Doug Ford as the new Progressive Conservative leader in Ontario is fascinating on a number of levels. After the fiasco of his brother's administration in Toronto, his losing campaign against John Tory for Mayor of Toronto that saw the power of so-called strategic voting at work, his inherently polarizing approach to politics and even his own claims (prior to his victory of course) that the results of the leadership vote would be "corrupted" would have led one to think that a party on the verge of a landslide election victory would have stepped back from the possible abyss that is Doug Ford.

But these are troubling times where liberals and what is left of "social democracy" have ceded much of the ground on class politics and have been unable to understand, address or deal with the rise of an inchoate rage in segments of the population and society whose disenfranchisement politically and economically have sowed the seeds of nascent neo-fascism.

Ironically -- and perhaps ultimately tragically -- the Wynne Liberal government has shifted dramatically over the last few months with some impressive new legislative moves. These include the introduction of pharmacare for everyone in Ontario 24 and under, the rapid raising of the minimum wage, the introduction of sweeping and progressive new labour law legislation, bringing in "pay transparency" legislation, new laws to protect temp workers and others. Some of these have been passed and some may never happen should Wynne lose, but they are a very progressive agenda to go into an election on in the framework of today's politics.

Some, especially New Democrat partisans, will claim these moves are simply cynical steps to try to (again) outflank the NDP on the so-called "left", and perhaps to a degree they are. But they also undeniably have begun to make the lives and working conditions of millions of Ontario workers better. The partisans will also point out that these moves do not go anywhere near far enough, which they do not. But this does leave one having to note the total absence of a more robust, social democratic plan from the NDP. To counter these moves by the Liberals the Horwath NDP has done next to nothing in response. To say they have yet to make a compelling case as to how they would be more progressive than the Wynne Liberals would be generous.

This unusual conjunction of the seeming election of Ford against the backdrop of a mildly progressive, cynical Bay St. government whose "left" opposition has adopted overtly class-collaborationist rhetoric and has sought to minimize its left credentials, leads to the conclusion that the push to "strategic voting" will again be profound in the minds of many voters. That this urge should be resisted -- in fact, the case for not voting for any of the three main parties, NDP included, has never been stronger -- is a separate matter for a later piece, but the anti-strategic voting argument will be made dramatically harder with Ford's victory even though he was actually not that far to the right of his opponents ideologically.

Many NDP hacks and observers outside of Ontario see a great opportunity for the ONDP here but fail to root it in the actually existing conditions. It is hard to see grand electoral vistas with Horwath's milquetoast, say-nothing approach.

But it is also hard to see a path to victory for such a deeply unpopular government as Wynne's is. The Wynne Liberal government is arguably less popular at the moment than the Bob Rae government was prior to its decimation in 1995.

All of the Rae government's opponents were lined up on the right. In these different conditions the Wynne Liberals can  attempt to try to shift the narrative based on a legislative agenda that is far more popular than they are.

Unquestionably though, her opponents on the right and the nominal "left" will seek to make this a "change" election focusing on "throwing the bums out". This change mantra is centred entirely on the government itself as opposed to its polices, rendering it primarily an electoral tactic.

Having said that, the election of Doug Ford, or Christine Elliott for that matter, would represent a terrible blow to the interests of working people in Ontario. Viscerally so.

And this will form the foundation of Wynne's attempted comeback from the edge of oblivion. Her success in this may well depend less on Ford than on whether or not the ONDP continues with an approach that appears to be more based on at least trying to come in second as opposed to actually making a serious case for why they should get the votes of working people and those threatened by a Ford or Elliott win.

Posted by Michael Laxer at 5:25 PM