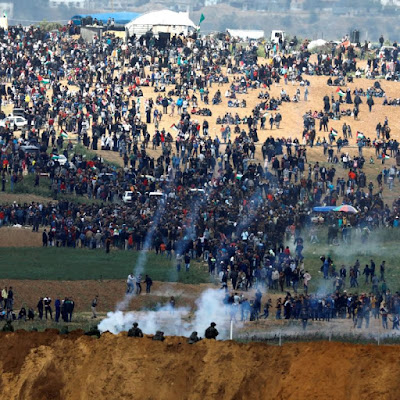 This list covers the week of  March 25 - April 1. It is generally in order of the date of the article's release.

1) How rightwingers have attacked Parkland students with lies, hoaxes and smears

No issue unites the American right more than their opposition to gun control. The spectacle of hundreds of thousands participating in the #marchforourlives, led by young people, was always going to draw a full-spectrum response.

Doctored images showing Florida school shooting survivor Emma Gonzalez ripping up the US constitution are being shared on social media.

During a live Q&A on Twitter, students who survived the mass shooting Marjory Stoneman Douglas High School called out the media for dedicating an overwhelming amount of news coverage to their cause while ignoring Black communities fighting gun violence.

Greece’s former finance minister, Yanis Varoufakis, acting on his promise to take mainstream politicians to task, has announced the formation of his own party.

6) After 23 years in prison as an innocent man, former White Sox groundskeeper returns to his old job

He spent the next 23 years behind bars until DNA evidence last November led prosecutors to vacate Coleman's conviction, leading to his freedom. A Cook County judge granted him a certificate of innocence this month, clearing his name.

A publishing house won't be intimidated by the hateful emails which have arrived since rejecting a book pitch from Saskatchewan farmer Gerald Stanley, says a spokesperson.

8) Unable to afford rent, some Vancouver seniors choosing to take their own lives rather than become homeless, advocate says

More seniors are being pushed into homelessness because they can’t afford the city’s high cost of living or find a safe shelter, says the head of a seniors’ non-profit organization.

Police are investigating after a video showing a woman ripping up pages of a Quran and placing them on the windshield of cars outside of a Mississauga mosque was posted to Facebook last week. The video also shows the woman telling the attendees of the mosque that they worship Satan.

10) MADURO IS THE COMMUNISTS’ CANDIDATE IN VENEZUELA

After negotiations and sometimes heated internal discussions with the United Socialist Party of Venezuela in power, the Communists have chosen to support the candidacy of incumbent President Nicolás Maduro, on the basis of a common framework agreement read by two executives of the Venezuelan Communist Youth and acclaimed by the assembly. After reading it, the text was initialed by two members of the national leadership of the PSUV, two members of the Political Bureau of the PCV as well as by Nicolás Maduro himself.

11) #MeToo Means Standing By The Most Marginalised. It’s Time To End Prostitution

Accepting the prostitution of women, under any conditions, contributes to a culture of men’s entitlement to women’s bodies for sexual gratification and power. It allows the message to continue that there are categories of women for different purposes. Those categories limit all women’s lives. It’s time for all women to be free. It’s time to change the law. Join us.

The rent strike at 1251 King has ended in victory. Nuspor has withdrawn the above guideline rent increase at our building.

Parkdale tenants at 1251 King St. W. are celebrating after the property’s owner announced it has withdrawn an application to the Ontario Landlord and Tenant Board (LTB) for a rent increase over the standard allowable limit.

14) Stuart Parker: Why I've resigned from the B.C. NDP

But this nihilistic, headlong embrace of global climate villainy is too much. Go to hell, New Democrats. I am ashamed I gave you a second chance.

15) LNG TAX BREAKS MUST BE REJECTED

Statement by the Communist Party of BC, People's Voice

Less than a year after the BC Liberals were defeated in part because of their close ties to the big energy monopolies, the new government of British Columbia is already beginning to move in a similar direction. Despite their campaign promises to shift away from Christy Clark’s  economic strategy based on extraction and export of energy and other raw materials, two early key decisions by Premier John Horgan have been the Site C Dam approval, and now the offer of massive tax breaks for liquefied natural gas (LNG) projects. The Communist Party of British Columbia condemns the LNG tax breaks and the earlier Site C approval as disasters for the environment, for indigenous peoples, and for working class taxpayers.

16) Ontario budget to fund free child care for preschoolers as part of $2.2B plan

Premier Kathleen Wynne has unveiled free child care for preschoolers in a $2.2 billion budget boost that is the cornerstone of the Liberals’ spring re-election platform.

But the clock is running out for the NDP to leverage social movement power the way that a social democratic party is supposed to: stop sniping from the sidelines, or inventing claims like those of us who have fought for 25+ years for public education are supporting private childcare. Take up the demands of social movement activists and offer a clear and different option to Ontarians.

18) WHO’S TO BLAME FOR A GENERATION OF ANGRY WHITE MEN?

There is nothing more dangerous in the United States than a white male who has expected to succeed and finds himself falling behind. Or a white male who has power and feels his prerogatives are being challenged from every direction by women, people of color, immigrants, Muslims, and their capitalist overlords.

If Ford were to wipe out the entire justice system— $4.7 billion — he still wouldn’t have his $6 billion in promised savings.

Responding to Ontario’s 2018 budget Wednesday, Doug Ford raised fresh questions about his basic understanding of the issues when he offered reporters a nonsensical suggestion about how he could save Ontario money: cut funding for the CBC.

21) Proposals to Reinvigorate the NDP Platform

During the Tommy Douglas era the CCF and NDP had platforms that caught the imagination of a wide range of people.

22) Project Montréal is right to stop car traffic over mountain, but should go further

Do you support humanity and livability? Or the "right" of people to use private cars?

23) The guns debate is a culture war. And young people will win it

This is a fight between a young, diverse, feminist generation against an old, white, male minority desperate to hang on to power.

More than 100 people have contacted the Guardian with allegations of child sexual abuse and other mistreatment in Jehovah’s Witness communities across the UK.

An international student is “too petrified” to return to his job after two men assaulted him near his workplace, levelling racial slurs before removing and stealing his turban.

Bleeding from two lacerations in his cheek, Tyrone Hines was sitting in the back of a Toronto police cruiser, handcuffed, when the officer who had just struck him in the face with his baton pulled out his pepper spray.

27) Feminists used to reject magazines like Cosmo, now we’re told to celebrate them as empowering

After pressure from the National Center on Sexual Exploitation, Walmart removed Cosmopolitan from its checkout stands. Now, liberal feminists are defending the magazine as empowering for women.

Ontario Provincial Police files obtained by CBC News reveal the history of abuse at the notorious residential school that built its own electric chair.

29) The ‘Roseanne’ Reboot Is Funny. I’m Not Going to Keep Watching.

This fictional family, and the show’s very real creator, are further normalizing Trump and his warped, harmful political ideologies. There are times when we can consume problematic pop culture, but this is not one of those times. I saw the first two episodes of the “Roseanne” reboot, but that’s all I am going to watch. It’s a small line to draw, but it’s a start.

‘President Trump has freed so many children held in bondage to pimps all over this world,’ she wrote Friday. It's not the first time she's dabbled in the conspiracy theory.

32) Stephon Clark was shot multiple times from behind by Sacramento police, pathologist says

Sacramento police shot Stephon Clark seven times from behind, according to autopsy results released Friday by a pathologist hired by Clark's family.

33) Large crowd turns out in Dublin for #IBelieveHer rally

At least a thousand people brought traffic and trams to a standstill on O’Connell Street in Dublin on Thursday afternoon in a rally in solidarity with the woman in the Belfast rape trial that concluded yesterday.

During an official visit to Cuba, Communist Party of Vietnam's (PCV) Nguyen Phu Trong held dialogue with Cuban President Raul Castro to discuss the strengthening of bilateral relations between the two nations.

The Gaza Strip is reeling from the bloodiest episode in years after Israeli forces killed more than a dozen people during demonstrations near the frontier. Gazans had gathered as part of a “Great March of Return” protest demanding refugees and their descendants be allowed to return to their ancestral homes in Israel.

A Palestinian taking part in Friday's "March of Return" near the Gaza border was shot with his back to Israeli army soldiers while moving away from the border fence, so appears to show a video published on Palestinian media Saturday.

Human rights organizations have come out in full condemnation of Israel’s violent response to massive unarmed civilian protests in Gaza on Friday, which left 16 Palestinians - one farmer and 15 protesters -- dead along the Gaza border.

Israeli Prime Minister Benjamin Netanyahu has praised Israel's security forces after the killing of 17 Palestinians in the Gaza Strip, just as condemnation of the Israeli army's use of live ammunition against protesters grows.

For decades Zionists have blamed the Palestinians for Israel's ongoing colonial project. "If only the Palestinians had a Mahatma Gandhi," many Israeli liberals have exclaimed, "then the occupation would end."

But if one truly wished to find Palestinian Mahatma Gandhis all one needed to do is look at the images of protesters on Friday night's news broadcasts. An estimated 30,000 Palestinians joined the nonviolent March of Return, which aimed to set up a few camps several hundred meters from the militarised fence surrounding the Gaza Strip. Their goal was to protest their incarceration in the world's largest open-air prison as well as the massive confiscation of their ancestral land - after all, 70 percent of Gaza's population are 1948 refugees whose families had owned land in what became Israel.

Posted by Michael Laxer at 9:47 AM