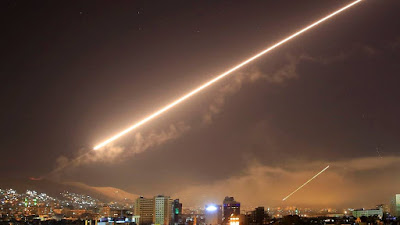 The morning after the launch of attacks by the United States, the United Kingdom and France against Syria in response to an alleged poison gas attack it seems that the strikes are, for now, more limited in scope than Trump made it out they would be last night.

Trump's justification for the attacks, of course, reeks of the standard American imperialist hypocrisy. “What kind of nation wants to be associated with mass murder of innocent men women and children?” Trump rhetorically asked in his address to the nation.

Such a framing is absurd coming from the President of a power that has directly been involved in the mass murder of more innocent men, women and children than any other since WWII, the United States itself.

The United States is the largest terrorist regime in the world, having played a role to one extent or another in the indiscriminate and illegal killings of countless millions over the last few decades, from Indonesia to the death squads of Latin America to backing Pol Pot and the Khmer Rouge after they were ousted by the Vietnamese to the invasion of Iraq on entirely false grounds to the endless drone strikes of Obama.

To say that their right to claim any moral high ground in international affairs is ludicrous would actually be understating matters. The motives of Trump and his allies May and Macron are driven entirely by domestic considerations, such as the raids on the offices of Trump's lawyer. Alleged humanitarian concerns are simply window dressing.

Further, as the Guardian put it:


Worth noting that staff from the UN’s Organisation for the Prohibition of Chemical Weapons were due to visit Damascus on Saturday to determine whether chemical weapons were used in Douma on 7 April.

To rush to unleash military strikes before this investigation was completed really puts the lie to its supposed moral and legal basis.

Canadian Prime Minister Justin Trudeau, of course, quickly bleated out his support for the attacks, playing the usual liberal game of being lapdogs for every American President and their international agenda, no matter how dangerous or unhinged that President may be.

In the UK, however, Jeremy Corbyn at least has called into question the legitimacy of the actions. 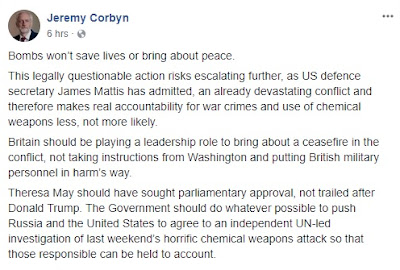 Then today he released a more comprehensive statement that deserves to be quoted in full:

Dear Prime Minister,
I want to thank you for speaking to me last night regarding the bombing raids in Syria overnight, and for the security briefing you shared.
I am very glad that all British military personnel have returned home safely, and hope too that there have been no civilian casualties in Syria.
As I said I believe that Parliament should have been consulted and voted on the matter. The UK Prime Minister is accountable to Parliament, not to the whims of a US President.
I believe the action was legally questionable, and this morning the UN Secretary General has said as much, reiterating that all countries must act in line with the UN Charter. You assured me that the Attorney General had given clear legal advice approving the action. I would therefore be grateful if you would publish this advice in full today.
Given that neither the UN nor the OPCW has yet investigated, it is clear that diplomatic and non-military means have not been fully exhausted.
It is now vitally important that the OPCW inspectors, who are due to arrive in Douma today, are allowed to do their work and publish their report into their findings – and report to the United Nations Security Council.
I would therefore welcome your assurance that there will be no further bombing raids while OPCW inspectors are on the ground. They must be allowed to complete their inspections without hindrance.
Acting through the United Nations, I believe Britain should now take a diplomatic lead to negotiate a pause in this abhorrent conflict in which hundreds of thousands of Syrians have already been killed and millions displaced. The refugee crisis places a responsibility on all countries and I the government will now increase its commitment to take additional refugees. Hundreds of unaccompanied children remain in Europe and the UK must do more through the Dubs amendment.This means engaging with all parties that are involved in the conflict – including Iran, Israel, Russia, Saudi Arabia, Turkey and the US – to ensure there is an immediate ceasefire. We have the grotesque spectacle of a wider geopolitical proxy battle being waged with the Syrian people used as pawns by all sides.
I would welcome your assurance that Britain will embark on renewed diplomatic efforts to end this conflict. Our only priority must be the safety and security of the Syrian people – which is best served by de-escalating this conflict, so that aid can get in.
Yours sincerely,
Jeremy Corbyn MP
Leader of the Opposition


As of the time of this posting neither the NDP nor its leader Jagmeet Singh appear to have said anything at all.

Posted by Michael Laxer at 7:39 AM