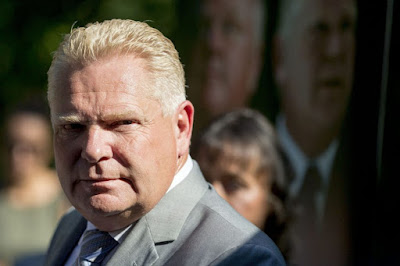 With just two months until the Ontario election the Doug Ford led Conservatives are still well ahead of the Wynne Liberals even though the Liberals have shown a faint flickering of life in some recent polls. The New Democrats remain mired in third place to date under the lackluster leadership of Andrea Horwath.

That Wynne remains deeply unpopular despite the popularity of many of her recent programs and announcements is quite clear. While the depth of the loathing for her in some quarters is obviously driven partly by homophobia and misogyny, the broader malaise stems from the Liberals having been in power for a very long time, having seemed very tired until just recently and to a lingering sense that they are tainted by corruption.

With Ford poised to be Premier people are paying closer attention to the Conservative platform and their plans for the province should they win -- or, perhaps more accurately, to the seeming lack of any clear plans or a platform.

Unlike Patrick Brown, who had a comprehensive, relatively centrist platform that had even been published in magazine format with his image on the cover itself, Ford has stuck more to the right faux populist trick of incoherent and angry broad strokes or coded slogans like how he is going to "Take Back Ontario".

While this pronounced lack of detail is getting more notice and causing consternation among various newspaper columnists, for Ford fact free during this campaign is really the way to go.

The vagueness, one has to think, is entirely deliberate. Part of this is, no doubt, due to Doug Ford's fairly obvious weak grasp of basic issues and his general ignorance of governance and provincial politics. This is not simply a man who played a key role in his brother's catastrophic municipal administration in Toronto, but who also recently mused about cutting funding for the CBC should he win in June, which should tell you all you need to know.

In the few cases where to date Ford has made pledges they have likely done him more harm than good. An instance of this was when he came out of the gate promising to cancel the minimum wage hike to $15 an hour set for next January. He described it as a "tax grab" -- which it is not -- and promised to replace it with a tax cut for low income workers that people quickly figured out would mean substantially less money in their pockets than the higher wage would have delivered.

Of course, if you refuse to make any serious commitments you don't need to justify or explain them.

In a recent trip to Welland, for example, Ford simply did not take a position on an issue of serious regional concern -- the promise of the Wynne government to extend GO service to Niagara by 2021. Instead of saying whether he would either continue with or cancel the plan, Ford said he would "review" it and "talk to the people", a mildly clever way to try to cover-up equivocation and lack of leadership by cloaking it in nominally democratic, populist themes.

Ford skipping the first leader's debate on April 11 fits into this pattern. Organized by black community leaders it was certain to be dealing with issues on which Ford is not conversant or where his positions are very likely to be anathema to many in attendance. Easier by far to dodge it and make the outrageous and facile claim that "There's no other politician in this country, no other politician outside of Rob Ford, that has supported the black community more than I have." Though this is transparently false, as a sweeping slogan it will be believed by those who want to believe it with no need for Ford to "prove it" on any serious level. How could one even prove such an over-the-top absurdity?

Now that provincial Conservative politicians have united behind him this walking of a far right line may prove a Faustian bargain for those who still attempt to pretend that the Conservatives have a "progressive" component. The Mulroneys and Elliotts appear ready to sacrifice the reasonable on the alter of power where they can hope for cabinet chairs and the other benefits of government. They are remaining loyal despite Ford's clear and demonstrable embrace of Trump style politics, perhaps in the misguided belief that they will somehow be able to moderate or temper the beast from behind the scenes.

Given that large parts of Ontario are not yet quite as receptive to far right fantasies as some other countries and places, Ford and the Conservatives have to walk a line that keeps the extreme base that put Ford into the leader's chair all riled up while not alienating those more centrist voters dissatisfied with Wynne and the Liberals. The best approach to doing this is saying as little as possible beyond the populist rhetoric.

Slogans are often immune to factual inquiry. They can also mean whatever your audience wants them to mean. As with Trump, and as with his brother Rob before that, Doug reflects a very dangerous trend on the right where angry narratives and anti-government, anti-social justice myths replace serious policy frameworks and any pretense of a broader discourse politically. These narratives lend themselves towards a deeply toxic blend of authoritarianism and nihilism due to the fact that they are both simplistic and delegitimize all other viewpoints.

The call from a wealthy white male to "Take Back Ontario" clearly implies that somehow it has been stolen away by forces who have wrested it from those who should rightly be in charge. Among many on the far right, especially white and male supporters, those who should rightly be in charge are men who look and sound like Doug Ford. The meaning of the slogan need not be explicitly said for it to be effective.

Scratch the surface at all and we know that a Ford government in Ontario will bring massive cutbacks, austerity, the rollback of newly won rights for workers and a deep hostility to any attempts to redress historic and systemic injustices or oppression.

For this very reason we can expect that Ford and the Conservatives will do their very best to see that the surface remains unscratched.

See also: If Doug Ford won, what does it mean for Ontario?
Posted by Michael Laxer at 9:54 AM