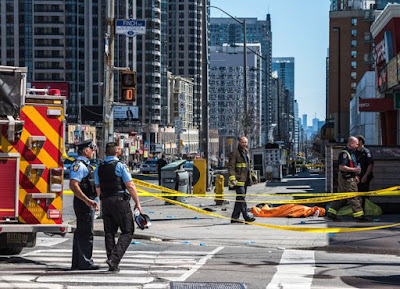 Horrified. Disgusted. Angry. Those words and many others can accurately describe how myself and so many others feel about the terrible, senseless attack in Toronto that claimed the lives of 10 innocent people and seriously injured 14 others.

But what I am not is surprised.

If, as seems increasingly likely, the alleged killer Alek Minassian was motivated by a hatred of women and the ideas and philosophy of online misogynists, this is an attack that was all too predictable.

Minassian appears to have been an "Incel", an extreme wing of what has been described as the "manosphere", a loosely connected collection of misogynists of various stripes and incarnations. The Southern Poverty Law Centre said of this: "The so-called “manosphere” is peopled with hundreds of websites, blogs and forums dedicated to savaging feminists in particular and women, very typically American women, in general."

Toronto journalist Arshy Mann has posted a "primer" about Incels that is definitely worth reading if you are unfamiliar with the term.

After many years of writing about, researching and covering the "Men's Rights" movement and its assorted figures, websites and detritus, what I would say is that while Incels may well be particularly bad, they are simply a logical conclusion to an already dangerous extremism.

An extremism that turns reality on its head with lies about notions of "misandry" and absurd ideas that women and feminists (especially) are somehow oppressing men.

A remarkable number of what amount to terrorist acts are motivated by misogyny and the internet has allowed very angry, bitter, woman-hating men to find each other and various organizations and groupings that reinforce their views.

No doubt many, especially on the right, will write off this recent attack as the actions of a mentally ill man -- a label and attitude that among other things is profoundly unfair to people suffering from mental illness.

They will do this even as evidence is mounting that Minassian targeted women during his rampage.

The mainstream media "terrorist" narrative is not served by a story of terrorism against women. That horrific daily reality is just the background noise of the crime pages, rarely acknowledged even when it manifests itself in the most terrible brutality. Regularly men who commit acts of  depraved viciousness against women are portrayed sympathetically by the media. They supposedly suffered from PTSD, bullying, mental illness, or any number of other supposed mitigating factors. They often are remembered as "loving" or as having cared about their wives, partners or families, even when killing them all.

It is rare indeed that the essential issue of systemic misogyny is named. Rare indeed that the terrorist actions of men targeting women are acknowledged for what they are and that, god forbid, it is suggested that maybe men online spewing a constant stream of hateful vitriol about women and feminists might have something to do with, might even encourage, male violence.

The online "manosphere" has been incredibly dangerous for a very long time. It actively promotes and facilitates the hatred and delusions of angry, exceptionally violent men.

It is important for people to understand this and the threat it poses.

It is important for all of us, collectively, to confront the profound danger that is male hatred of and violence towards women.

Further reading about the MRA and online mysogyny:

Lies our fathers told us: The men's rights movement and campus-based misogyny

Guess what's coming to U of T: The Men's Rights Movement, Janice Fiamengo and Paul Elam

Posted by Michael Laxer at 7:44 PM