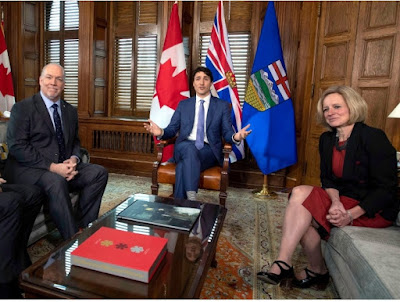 What to make of Prime Minister Justin Trudeau arriving in Paris to meet with French President Macron claiming that the two will "redouble their efforts and increase their co-operation" in the fight against climate change?

Is this the same Prime Minister who has just vowed to build the Kinder Morgan Trans Mountain pipeline even if it means doling out billions in corporate welfare and irrespective of the rights and wishes of Indigenous peoples and the government of British Columbia?

That his actions around Kinder Morgan belie his purported commitment to the targets of the Paris Agreement should come as little surprise given that his proclamation of the pipeline as essential to the "national interest" also puts the lie to his government's supposed commitment to the United Nations Declaration on the Rights of Indigenous Peoples (UNDRIP).


States shall consult and cooperate in good faith with the indigenous
peoples concerned through their own representative institutions in
order to obtain their free, prior and informed consent before adopting
and implementing legislative or administrative measures that
may affect them.

So again, what to make of the fact that when Trudeau called for a "summit" to try to work out political differences related to the pipeline the Premiers of British Columbia and Alberta were there but no representatives of First Nations were?

Assembly of First Nations National Chief Perry Bellegarde was rightly outraged by this saying "I think it’s a very big miss for the government. You’ve got the federal Crown, you’ve got the provincial Crowns, you’re missing out the rights and title holders and that’s the most important element".

Grand Chiefs Stewart Phillip and Serge Simon were very clear about what these actions by Trudeau represented saying in the Globe and Mail:


Justin Trudeau's government has a decision to make. It can cut its losses and realize it simply made a mistake in approving the project. Or the Trudeau government can double down on its current path. But Canadians should be very clear-eyed about what that represents. It represents more than a failure of climate leadership. It means going back to the Stephen Harper days when Canada’s reputation on the climate file was mud.
Importantly, it also means going back to colonial-era relations with Indigenous people. In fact, if the federal government tries to ram through this pipeline, it could mean going back to one of the darkest times in modern Canadian history: the Oka standoff with the Mohawk Nation.
We just witnessed the ugly and shameful crackdown in the United States on the peaceful anti-pipeline protests at Standing Rock.
We don’t believe that’s the Canada that most Canadians want to live in. It would be a cruel joke indeed if, in this era of “reconciliation,” Canada instead repeats the mistakes of the past.

Trudeau, though, was not alone at the Kinder Morgan "summit". B.C. Premier John Horgan was there as well as Trudeau's pipeline ally, and the pipeline's greatest booster and advocate, Alberta Premier Rachel Notley. Neither insisted that the meeting needed a First Nations representative for it to have any legitimacy.

Of course, this should really come as no surprise.

Notley has so deeply invested her New Democratic Party's provincial government's political capital in getting the pipeline built that there is no depth to which she will not stoop at this point. Content not simply to see the rights of First Nations and the principles UNDRIP run roughshod over, she has also vowed to use any method no matter how outrageous to try to bully B.C. even saying that threatening transfer payments is in order or proposing legislation to try to blockade B.C's oil and gas supplies.

She has also talked repeatedly of the need to respect the "rule of law" with reference to potential mass protests over any attempt to build Trans Mountain, even though her government does not seem to respect Supreme Court decisions regarding First Nations rights over unceded lands and even though she surely knows what Canada's "rule of law" has meant for Indigenous people over the last several centuries. Many of Canada's most shameful moments, such as the horrific legacy of residential schools, were perfectly legal at the time.

Notley has already fully embraced the most right wing rhetoric around the tar sands as we have noted in the pieces To Rachel Notley -- Climate change is destroying millions of workers jobs and lives around the world, so please, smarten up and When it comes to opportunistic hypocrisy on the environment, Rachel Notley is right up there with Trudeau.

She may think that putting the short-term supposed electoral interests of her government ahead of the traditional alleged commitment of 'progressives' and 'social democrats' to the environment and indigenous rights is what she has to do, but it will hang as a terrible stain over the Alberta NDP and its legacy for a very long time.

B.C. Premier John Horgan, while opposed to Trans Mountain, cannot evade his own actions on these fronts either.

Horgan, after all, was the Premier who did not even bother with the usual progressive pretenses when backtracking on a perceived election promise and approving the Site C dam. Horgan actually put his cynicism on full display at the time saying:


When it comes to reconciliation and working with Indigenous leadership there has been over 150 years of disappointment in British Columbia. I’m not the first person to stand before you and disappoint Indigenous people

Yes, he actually said that.

Horgan also went even further than the previous right wing provincial B.C. government in offering tax handouts and other subsidies worth billions of dollars to encourage LNG in its natural gas infrastructure and export facility building plans, plans that could include constructing a pipeline!


Today’s announcement is a new form of climate denial: The idea that we can build new fossil fuel projects that will cause millions of tonnes of additional emissions while reducing our emissions at the same time. By sweetening the pot for fracked gas export, the government is laying out a red carpet for investors to help destroy our climate.

Notley, not without some justice, called out Horgan and his government for its "hypocrisy".

There is a lot of hypocrisy to go around.

This hypocrisy from Trudeau, Notley and Horgan -- this total willingness to abandon principles and to directly mimic the right in their willingness to put the needs of corporations and short-term economic development ahead of the needs of the environment and the rights of First Nations people -- does something insidious and ugly that will, sooner than they may think, come back to haunt their governments and their assertion that they are truly different from conservatives when in power.

It breeds deep disillusion and distrust among millions of Canadians who thought that casting a ballot for the NDP or the Liberals meant that they would get governments committed to serious change on these fundamentally, critically important issues.

This disillusion and distrust will be magnified exponentially should the "rule of law" be used to impose pipelines or projects on First Nations people and to clear away protesters through what would have to be the use of mass state repression and state violence.

Such actions call into question, justly, many of the claims that lie at the foundation of the case they try to make every few years as to why Canadians should trust in or be inspired by the supposed promise of a better future through liberal, social democratic or progressive governance.

See also: To Rachel Notley -- Climate change is destroying millions of workers jobs and lives around the world, so please, smarten up

See also: When it comes to opportunistic hypocrisy on the environment, Rachel Notley is right up there with Trudeau

Posted by Michael Laxer at 9:00 AM