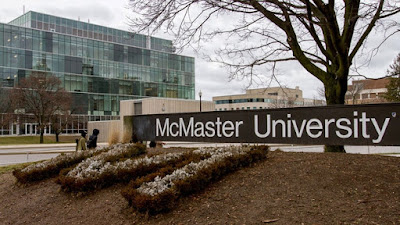 In what has to be one of the single most demented and offensive examples of some bizarre version of pseudo-liberal 'impartiality' in recent memory, the good folks at McMaster University have seen to fit to remove anti-Nazi posters from the campus on the grounds that "McMaster's goal is to ensure a welcoming and inclusive community."

Yes, you read that correctly. McMaster University, it would seem, wants "to ensure a welcoming and inclusive community" including, apparently, for neo-Nazis!

How did this outrageous circumstance occur? 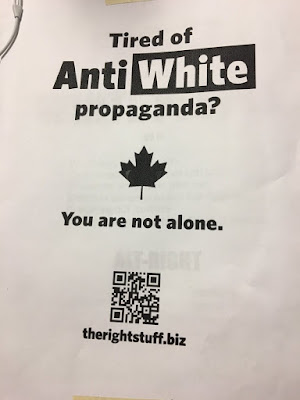 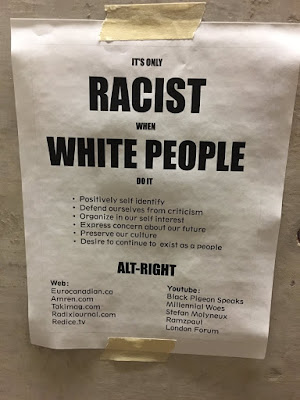 This website has articles like "Amerikaner Free State" that calls for "creating a White ethnostate in the United States".

Or to sites like eurocanadian.ca that includes misogynist tripe like "Premier Man-Thing, I Think I Love You" about Kathleen Wynne or articles like "Folk-Right Versus Multiculturalism".

After these posters were noticed, the university removed them.

In response some anti-racists at McMaster posted the following posters around the campus: 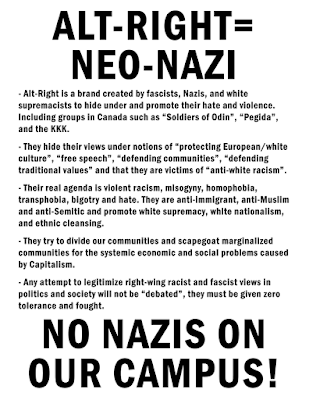 There is absolutely nothing that these posters say about the 'Alt-Right' or Neo-Nazis that is not totally accurate.

But according to a spokesperson for the university they were removed because they "do not reflect a welcoming and inclusive community".

Have the folks at McMaster lost all grip on reality and all perspective?

Are they seriously equating posters linked to racist websites with anti-Nazi posters?

The spokesperson also said "It is the responsibility of all those who come to the campus each day to engage in civil and respectful conversations and dialogue."

With racists and neo-Nazis?

This is an example of some grotesque bureaucratic version of balance from completely deluded liberals.

It is impossible to "engage in civil and respectful conversations and dialogue" with neo-Nazis and it is astonishing that the McMaster administration would actually remove posters that were fighting back against racist, alt-right, neo-Nazi propaganda.

There is no equivalency between those supporting racist and white supremacist views and those opposing them and it is simply staggering that McMaster would imply that there is.

McMaster's administration should be deeply ashamed of its actions here which are wrong on every level and not only show how the path to hell is paved with liberal nonsense, but also how the clueless can help to legitimize racists and fascists. They do this by taking actions against the opponents of the far right that make the far right somehow look like just one-side in a "debate" as opposed to the dangerous hate movement they are.

A hate movement that can and must be vocally opposed, including at McMaster and including by posters.

Instead of tearing them down, the university should have been putting some of its own up opposing the far right.

Email ThisBlogThis!Share to TwitterShare to FacebookShare to Pinterest
Labels: McMaster