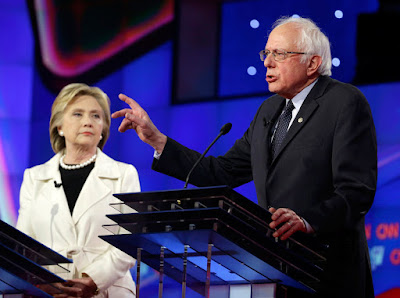 If you are on the left and were anywhere on social media this past 24 hours, by now you have seen them -- an endless stream of memes, tweets and the like all saying something to the effect of "If Bernie Sanders had been the candidate he would be President now, not Trump".

On Democracy Now there was an entire segment devoted to the idea that this is what would have happened that included statements like "If Bernie Sanders was the Democratic nominee, we would have won this election by far."

To a degree these sentiments are understandable. The Sanders campaign was incredibly inspiring to many people on the left -- myself included -- in ways that Clinton's more mainstream liberal campaign was simply not.  It came out of nowhere on an explicitly leftist platform to nearly take the Democratic nomination. It is hard to forget the huge and exciting rallies or the campaign ads that were unlike any others many of us had ever seen.

There can be little doubt, at all, that his campaign was significantly to the left of Clinton's and that unlike Clinton he did not have a history of Wall St. politics and did not have her overt embrace of American militarism and imperialism.

In addition, right or wrongly, many of his supporters feel he was cheated out of the nomination and there is at least some evidence to suggest that the deck was stacked against him, though in a way that should hardly be surprising.

There is also a widespread belief that Hillary Clinton was saddled with the "baggage" of past misdeeds and corruption and that Sanders was not.

While there is some truth to this, these narratives on the left were often dramatically overstated and frequently bore a discomforting resemblance to right wing talk about "crooked Hillary" that has deep undertones of sexism once you scratch the surface of it at all.

True or not, however, these types of accusations can have impacts on campaigns that can even be fundamental as with the "Swift Boating" of John Kerry in 2004. So it is at least conceivable that Sanders, without this believed baggage, would have been in a better spot than Clinton.

Finally, people point to a variety of polls that seem to indicate that Bernie would have, indeed, trumped Trump.

Perhaps. But I would not be so sure.

To begin with the polls indicating that Sanders would have won are abstractions as no campaign of his for the Presidency versus Trump played out in real time, in the real world, with all of the twists, turns, mud-slinging, mistakes, money, and other intangibles that occur over the course of them.

I have been both an organizer on campaigns and a candidate multiple times and I can assure you that, even on a far smaller level and even in campaigns where you have no chance of winning to begin with, there are always a stream of surprises, unexpected events, unforeseen developments or complications that will effect both the campaign you are involved in and/or the campaigns of your opponents.

A bad debate night, old 'dirt' everyone had forgotten about or that no one knew about that is dragged up from the past, a comment that is ill-advised or taken out of context, unexpected events nationally or internationally, etc.

These could all have possibly happened to Sanders, and his past embrace of what to many Americans would seem to be far left causes like the Sandinistas in Nicaragua would have been used in countless ads and thrown in his face daily.

It is important to not underestimate the incredible resistance Sanders would have faced. Many of those convinced that he would have won seem surprisingly naive about the extent that elements of the American state, as well as the business, media and political establishment, would have gone to to defeat him.

While he would not have faced the intense misogyny and sexism Clinton did, unlike Clinton the endorsements and money from sections of the right wing media, Wall St., some Republicans and a section of the militarist and hawk wing of the US state that she received would not have been forthcoming.

Quite the opposite. 'Even' against Trump.

These forces would have found excuses to attack him and to go at him to prevent his election with everything they had.

Further, there is an underling assumption here that left wing populism would best right wing populism electorally. That Bernie's anti-establishment rhetoric would have resonated more powerfully with those who voted than did Trump's with its overt tones of racism, sexism, 'anti-political correctness' and nativist nationalism.

But there is no real evidence that this is this case other than our desire on the left to believe it would be. It is possible that this would have been true, but it is by no means a safe assumption to make. At all.

More importantly though, what a Sanders campaign would have been like is both unknowable and to a degree almost unimportant now. As with altogether too much of our politics it reflects a fixation on individuals as potential saviours who will deliver us from what we want to defeat and to bring us to some kind of promised land.

But the issues that confront us run deeper by far than just one candidate or another making the fundamental difference in our societal outcomes.

In fact, the entire arc of Bernie's campaign and its dissipation within the Democratic Party* is proof of the need to build political movements that are not centered around individuals and a specific moment in time as his was.

I have argued before and continue to believe that Sanders' "movement" and "revolution" were fatally flawed due to the centrality of his place within it. In reality, he was so fundamental to it that it really cannot be described as a movement or political revolution at all and it has not played out as one.

Is it possible that Sanders would have won the election? Sure. But it is at least equally possible that he would not have. And while it is very important in the coming days to try to understand how and why Trump happened, what it means, and how the failings of the left and liberalism contributed to his emergence, saying "if it had only been my guy this never would have occurred" is not an interesting or useful analysis on any level.

What it does reflect is just how far we have to go in creating broad democratic movements and ideas that move beyond our singular social fixation on a 'Great Leader' as an agent of change.

*He too, we must remember, would have carried the Democratic Party's recent history and failings around with him on his campaign as well, even if to a smaller degree than Clinton. In part this would have been because he would never have repudiated and attacked the Democratic Party leadership and its past record to the degree that Trump was willing to with the Republican Party.

See also: The problem with Bernie's 'movement' is Hillary Clinton and the Democratic Party
Posted by Michael Laxer at 7:36 AM