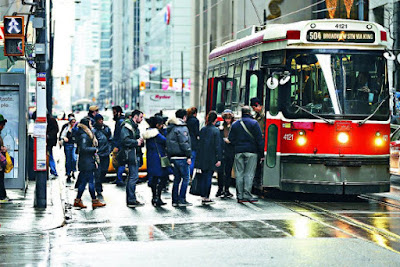 Lost late last week in the cacophony of reaction to Mayor John Tory's announcement that he would be considering the implementation of road tolls on Toronto's highways was a very interesting article from the Toronto Star's Edward Keenan.

Keenan reported on the fact that -- as many such as myself have long believed -- the notion that TTC riders cheating on fares is a serious or significant contributing factor to the transit system's fiscals woes is nothing but balderdash. It is a convenient, though false, attempted diversion by Toronto politicians from real issues.

His article is worth quoting at some length. As I also noted here on The Left Chapter about Mihevc and others a few months ago, Keenan writes:


Earlier this year, TTC chair Josh Colle and TTC commissioner Joe Mihevc were spinning tales about this scourge on transit finances, and the topic came up again, inevitably, at the transit budget meeting this week. Monday night, Mayor John Tory found himself musing about it on his call-in television show. “I even said we may have to get to the stage where we have to shame people and publish their picture in the newspaper and say this is somebody, who for the sake of a TTC fare, you know, made everybody else pay,” Tory said....
...All this finger pointing at schemers, apparently, makes for great political drama. It’s satisfying! There’s someone to blame. We get to say that part of our difficulty balancing our budget and keeping fares low is that bad guys are cheating us. Having a villain makes for easier politics and better storytelling. If we can somehow work a high-speed streetcar chase through the financial district into the climax, it will make for an entertaining film adaptation.
As a way to actually discuss any real problems — budgetary or otherwise — that the TTC faces, however, it leaves much to be desired.


TTC spokesperson Brad Ross tells the Star there’s no reason to think fare evasion is a particular problem at the TTC, nor any reason to think it has risen dramatically. Most transit systems, he says, see about 2 per cent of riders try to sneak on without paying, and that’s about what the TTC estimates it suffers from — a percentage that has remained “fairly consistent” even as the TTC has introduced all-door boarding and free rides for children.
So: management says they see no evidence of this problem that politicians are banging on about.

After noting that there are far bigger problems facing the TTC, Keenan also writes:


The New York City website Streetsblog recently reported on a discussion panel in which transit executives from Boston, London, San Francisco and Oslo talked about how, in order to serve riders well, they basically stopped worrying about fare evasion. “Fare payment isn’t the point of running a bus system, (the point) is getting people to the places they want to go,” David Block-Schachter of Boston’s transit authority reportedly said. London, England’s transit authority is no longer even handing out fines for turnstile hopping. “When you stop worrying about fare evasion, but you focus on the convenience of the fare system — you focus on the service it provides to the rider — it opens up a lot of options for the agency, which could allow you to offer better service at lower cost,” one speaker at the event said.
This isn’t because it isn’t annoying that some people cheat the system. It’s because some people will always cheat the system, and the cost and hassle of making it difficult for them is not worth it — especially since most enforcement measures make the system a hassle for all riders. And what you want to focus on, if you want more riders, more honest, fare-paying riders, is making the system as hassle-free as possible.

This point is key and needs to be emphasized again: "This isn’t because it isn’t annoying that some people cheat the system. It’s because some people will always cheat the system, and the cost and hassle of making it difficult for them is not worth it — especially since most enforcement measures make the system a hassle for all riders."

And this is critical to understand. In a piece this past February both here and on rabble.ca, Joe Mihevc and Toronto politicians are "ripping off" the TTC -- Not transit riders! I wrote:


...hiring the new TTC goon squad that would be required to harass and police all those riders getting on at the back will not be free! It will cost millions and millions of dollars annually, so perhaps Mihevc could also investigate whether paying for the policing of transit users and constituents is actually even worth it.
Like all those now defunct "welfare cheat hotlines" that politicians promoted a generation ago I suspect it will turn out not to be.

The point is both that the enforcement measures are very expensive and that they don't only deter so-called 'cheats', they also deter everyone else. It is not simply the unpleasantness of having to interact with and be interrogated by wanna-be cops, it is also the soon to come hassle of having to have Presto cards, user IDs and even a proposal for TTC IDs for children as young as 10 to prove they should get to ride for free, which is simply absurd.

There is no doubt that the new layers of harassment the TTC is seeking to instigate in conjunction with yet another round of fare hikes will deter people, and especially casual users, from taking public transit.

Why would it not? You don't make a system appealing by making it cost more, forcing riders to jump through various hoops to use it and basically saying that you don't trust the people who are taking it! It is worth reminding the TTC's City Council overlords that they put in place the policy of opening the back doors on the streetcars to speed up the streetcars and reduce hassle. To then turn around and behave as if those riders doing what they are supposed to do and using these doors should somehow be regarded with suspicion is bizarre.

In addition, even if enough policing were put in place to seriously deter actual fare cheats, it still would not generate new revenue for the system as in most cases these are riders who are hopping on to go a few stops or who do not have the money to afford to pay. If enforcement does succeed in deterring them all the time, they will simply not use the system. They will walk or find other means instead. The net gain financially to deterring this type of behaviour is actually negative as the TTC will have to spend a lot of money to stop people who were never going to pay in the first place.

This is why when you hear politicians talk about "lost revenue" from fare evasion they are largely wrong and blowing hot air. It is not "lost" if it was never going to happen to begin with. Again: "the cost and hassle of making it difficult for them is not worth it — especially since most enforcement measures make the system a hassle for all riders."

Now, I think most Toronto politicians are smart enough to actually know this, but they need a scapegoat.

They need a scapegoat for terrible wastes of money like the disastrous multi-billion dollar proposal for a one-stop Scarborough subway extension, the increasingly idiotic "SmartTrack" John Tory signature transit 'plan', and the terrible decision to adopt the "hybrid" eastern Gardiner Expressway plan that is seeing predictable and very large increased cost projections.

As John Tory becomes desperate enough -- after a generation of governments on all levels being unwilling to maintain (let alone increase) taxes to the extent required to actually fiance the infrastructure and public transit projects the city of Toronto requires and that are in some cases decades overdue -- to be willing to touch that 'third rail' of civic politics that is road tolls, we see that Toronto's fiscal chickens are coming home to roost.

Councillor Gord Perks called the idea of road tolls a 'distraction' and writes rather convincingly (and at some length) about the reasons for this, not the least of which is that -- in addition to not generating what is actually needed in terms of revenue --  it will be years before the laws and infrastructure is in place for tolls to even generate a single dime for Toronto.

There is also an argument to be made that they are regressive, though that can be countered by the fact that they do discourage car usage -- a societal and environmental must -- as well as the reality that public transit users are made to pay "tolls" every time they use their system which makes one wonder why car drivers should not, especially given how clearly harmful car usage is?

But tolls are not going to generate anywhere near the money required to fund TTC expansion and keep fares down.

Doing that will require our politicians and parties on all levels to start being willing to actually have a serious conversation about the kinds of progressive income and corporate taxes, in conjunction with other taxes and revenue tools, that are required to achieve the funding for the Toronto and TTC we desperately want and need.

Until that day comes -- and it does not even seem to be on the horizon -- all the rest is, indeed, a distraction and trying to make an issue of fare evasion is nothing more than a pathetic, silly, simplistic and costly waste of time.

Posted by Michael Laxer at 3:20 PM