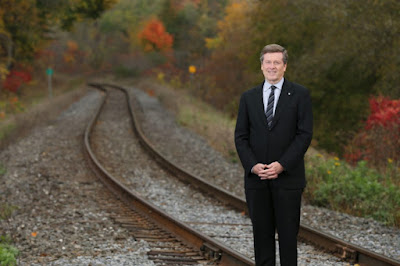 Reality, it seems, is wreaking havoc with Mayor John Tory's fantasy fiction vision for the city of Toronto.
A report issued by city staff on Monday has essentially derailed Tory's grandiose election 'vision', rather incorrectly called "SmartTrack", that was supposed to help solve Toronto's transit problems relatively quickly and for less money by using existing rail track and corridors.

As cdnpoli.net put it, SmartTrack "will now require new taxes, be at least 5 years late and [have] only 6 new stations instead of 22."

So, it turns out, the actual plan will cost a lot, take a long time to build, and service relatively few Toronto residents versus the original 'plan'.

Now, of course, Tory also absolutely promised that property taxes would not have to be raised to pay for SmartTrack, and he is doubling down on that pledge despite its increasing detachment from any sense of fiscal responsibility or sanity.

Instead Tory is insisting -- on CBC Radio this morning and in other forums -- that it will all still be done without a property tax hike through "other revenue streams...that could be developed to pay our share".

Meanwhile, Tory has refused to raise taxes to pay for all the other things the city needs and has implemented a deeply wrong-headed, cookie-cutter austerity regime that is calling for every city department -- including the TTC (!) -- to cut 2.6% of their budget next year by eliminating magical 'inefficiencies'.

In spite of this, Tory has continued to make delusional announcements -- many with grinning 'progressive' Councillors on hand -- claiming that, in addition to SmartTrack and other transit improvements, and a promise of no TTC service cuts, vast elevated parks will be built, the Don Valley transformed into a nature wonderland and his pledged anti-poverty plan will not be impacted at all!

Did we forget the part about his continued support for an enormously expensive one-stop Scarborough subway extension that will have fewer stops for fewer people than the less-expensive LRT plan it replaced?

That there is no more increased funding forthcoming from other levels of government to cover all of this is pretty clear.

The air of complete unreality that is settling over City Hall seems to know no bounds.

The fact is that Tory will have to raise taxes on a number of fronts very broadly or he will have to implement an even deeper and more vicious austerity program supplemented by selling off city assets and by regressive revenue tools like higher user fees and transit fares.

Given his ideological predispositions the latter is his far more likely course.

Tory and his council allies can stick their heads in the sand all they want, but there is simply no way to achieve SmartTrack -- let alone all the other pie-in-the-sky promises -- otherwise.