The ONDP's embrace of Mike Thomas says a lot about it. But nothing good. 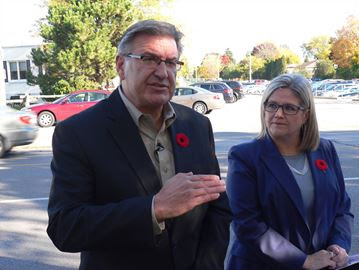 You would think that the 'brain trust' running the show in the Ontario New Democratic Party (ONDP) would have learned something from its disastrous attempt to try to court the right wing populist vote in the 2014 provincial election.

But apparently if it has learned any lessons they were the wrong ones!


In the Niagara West-Glanbrook provincial by-election that was held last night -- and that led to the election of a socially conservative 19 year old reactionary -- the ONDP's candidate was Mike Thomas.

Thomas ended up coming in a distant second, getting around 25% of the vote to wonderkid Sam Osterhoff''s 54% landslide for the Conservatives. He did come well ahead of the Liberal candidate, however, who was representing a government deeply unpopular in much of the province and weary from years of mismanagement and scandal.

On some level many in the ONDP's head office may see this as a 'victory' of sorts, though their candidate was, to put it mildly, a rather odd one for an allegedly progressive or social democratic party to have backed.

Thomas, it turns out, was a Conservative. Literally.

In September, 2016 -- or just a couple of months prior to the by-election -- Thomas had taken out a five year membership in the very Ontario Progressive Conservative party that went on to win and that he was now running against, at least on paper as a New Democrat.

Seriously. It would actually be difficult to make this up.

Thomas was also the former head of the Hamilton Police Association (a police officer 'union') and he sought to justify the chameleon like nature of his politics by saying:

But this seemingly reasonable sounding statement is a bit of a farce when the "relationship" involved joining a party with views supposedly inimical to those of a party that you then begin to represent in an election a scant couple of weeks later.

There are, after all, very different levels of relationship! It sounds like until he became a candidate for the NDP, Thomas' with the Conservatives was of the more intimate variety.

While somehow Andrea Horwath and her advisers may have been unaware of their candidate's fondness for Patrick Brown and the Conservatives, there is no real excuse for any lack of awareness of his views and comments when he was the head of the police association.

In that role, as an article in socialist.ca pointed out, Thomas defended the police "culture of silence". Speaking of an op-ed he wrote defending police officers not co-operating with internal investigations Evan Johnston writes:


Thomas chose to reinforce the deadly culture of silence that exists inside police forces, and rejected any measures that would bring greater accountability for individuals and families who have been on the receiving end of police violence.

Remember that these are statements made by a candidate that, as Johnston also pointed out:


In a press release, Ontario NDP leader Andrea Horwath stated how “thrilled” she is to to have Thomas as their candidate, and suggests that “Mike will work hard to show people that the NDP is different.”

Different from what exactly? Anything resembling the left?

While having once been a police officer might not disqualify you from running for a left party, one would think that holding these views and having been a Conservative party member up until the day you suddenly become an NDP candidate would!

It is especially shocking that Thomas would be allowed to carry the party's banner in the wake of incidents like the Sammy Yatim shooting, the rise of the Black Lives Matter resistance to police violence and the ongoing fight against and revelations about the racist and discriminatory practice of 'carding' by the police in Toronto and across Ontario.

It says something about the party given that both on a provincial and federal level it has disallowed the candidacies of people for left wing or radical comments or views. Barry Weisleder, the leader of the party's Socialist Caucus, is an example of someone whose candidacy was disallowed after having actually won a nomination democratically.

What it says is that candidates with views like those of Thomas are more than welcome in the province's self-proclaimed labour and left party.

It also says that the ONDP is keen to continue its approach targeting alleged soft Conservative swing voters at the expense of appealing to the far more numerous, and less fictional, large numbers of progressive and left voters in the Greater Toronto Area.

Given the collapsing support for the Wynne Liberal government one has to assume the NDP goal is to ride this wave of discontent in part from the right, though one might point out that that 'strategy' failed spectacularly already in 2014 and is likely to deliver in 2018 what it did last night -- a lot of distant second place finishes to Conservative candidates as people vote for the real thing.

More significantly, running a candidate like Thomas is deeply unprincipled and totally bankrupt from any left perspective whatsoever.

A candidacy like Mike Thomas' should have never happened in an alleged left party and the fact that it did, especially in today's context of mass resistance to ongoing police violence, really says all one needs to know about the ONDP right now.

See also: Death of a delusion: The ONDP's internal fictions and the Sudbury by-election loss

See also: Black Lives Matter is right -- The police are the oppressor

Posted by Michael Laxer at 3:16 PM