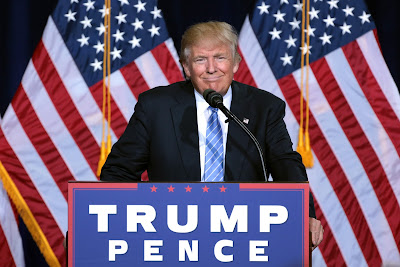 
This list covers the week of November 13 - November 20. It is in order of date of the article's  release. As was the case last week, this week's roundup is dominated by the American election and the victory of Donald Trump.

Donald Trump has announced his plans to put the “bad hombres” of America back where they belong: somewhere vaguely south of Texas.

Speaking to BCS’s 60 Minutes, the President-elect said: “What we are going to do is get the people that are criminal and have criminal records, gang members, drug dealers, where a lot of these people, probably two million, it could be even three million, we are getting them out of our country or we are going to incarcerate.” Only when these migrants have been dealt with and the US border is secure with his wall-cum-fence, will he then turn his attention to the remaining estimated 8-11 million immigrants residing in the US without proper papers.

Between Wednesday, November 9, the day after the presidential election, and the morning of Monday, November 14, the Southern Poverty Law Center collected 437 reports of hateful intimidation and harassment.

The Ontario Government's Adviser on Basic Income (BI), Hugh Segal, has released his much heralded discussion paper, “Finding a Better Way,” that sets out his proposals for a lengthy BI pilot project. If the experiment he advocates is put into effect, it will run parallel to the deliberations of a Security Reform Working Group that will be considering changes to the present social assistance system in the province, rather than replacement to it.

4) Why did women vote for Trump? Because misogyny is not a male-only attribute

Susan Sarandon told us why she would not vote for Hillary Clinton: “I don’t vote with my vagina.” Nor, it seems, do many women. The howl of pain that accompanied the post-election analysis has often centred on that one disturbing statistic: 53% of white women voted for a man who calls women pigs, has a string of sexual assault claims still outstanding, who will happily turn back women’s rights to contraception and abortion if it suits him. Women beware women.

5) Organizing a rally in Toronto? You don’t need to contact the police.

Yet again a demonstration is being organized in Toronto, and yet again those groups have contacted the police. This seems to happen every time there is a major news moment and new activists arrive on the scene. So here is a simple primer:

You don’t need to contact the police for rallies and marches.

6) Class and identity politics are not mutually exclusive. The left should use this to its benefit

“Class is back in politics,” declared Waleed Aly last week. “We ignore it at our peril.”

That may well be true but Malcolm Turnbull’s bizarre intervention on 7.30 reminds us that the terrain opening up since Donald Trump’s win is by no means simple. In a speech obviously shaped by the election result, the prime minister launched a very Trumplike attack on what he called the “elite media”.

7) We must rethink globalization, or Trumpism will prevail

Let it be said at once: Trump’s victory is primarily due to the explosion in economic and geographic inequality in the United States over several decades and the inability of successive governments to deal with this.

Both the Clinton and the Obama administrations frequently went along with the market liberalization launched under Reagan and both Bush presidencies. At times they even outdid them: the financial and commercial deregulation carried out under Clinton is an example. What sealed the deal, though, was the suspicion that the Democrats were too close to Wall Street – and the inability of the Democratic media elite to learn the lessons from the Sanders vote.

The neoliberal era in the United States ended with a neofascist bang. The political triumph of Donald Trump shattered the establishments in the Democratic and Republican parties – both wedded to the rule of Big Money and to the reign of meretricious politicians.

The Bush and Clinton dynasties were destroyed by the media-saturated lure of the pseudo-populist billionaire with narcissist sensibilities and ugly, fascist proclivities. The monumental election of Trump was a desperate and xenophobic cry of human hearts for a way out from under the devastation of a disintegrating neoliberal order – a nostalgic return to an imaginary past of greatness.

The recent electoral victory of Donald Trump over Hillary Clinton has led to a massive spewing of theatrics on social media whereby public “mourning” which verges on the sycophantic has given rise to a larger public momentum of mass neoliberal outrage as the surrogate for political activity.  Even within feminist circles are the myriad Facebook groups devoted to discussing how Clinton was the arch-victim of misogyny, no mention of class politics or Clinton’s having turned her back on the mere mention of class.  Now with the recent movement to utilise safety pins as a means to “indicate that the person wearing the pin is a safe person for those who might feel in danger, whether that’s due to their religion, nationality or other status,” we have fully entered into the age of absurdist politics whereby “safety” is demarcated through cheap political gimmickry and the real analysis of political failure is fobbed off by feminists as the inability of people to recognise the necessity of women’s political self-determination—or whatever that has come to mean nowadays.

In the ten days since the election, several thousand people have phoned and emailed my Seattle City Council office in their fury over my call to shut down Donald Trump’s agenda with massive peaceful protests on Inauguration Day.

Many messages were from middle- and working-class people who had voted for Trump because they hated corporate Democrats and Hillary Clinton, and mistakenly believed that Trump was going to stand up for the ordinary Americans. Many were also racist and misogynist, saying things like, “You don’t belong here with the bull***t you spew from your c***su**er,” or “Drop dead and go back to turbanville.”

11) An Open Letter to Margaret Atwood

Maggie. Can I call you Maggie? We need to talk.

I’ve been a fan since I was 17 years old and a former nun assigned me “The Handmaid’s Tale” for my grade 12 English literature project. I was a budding activist, a totally-feminist-but-didn’t-know-it-yet spunky teenager and my teacher saw that in me. It’s pretty radical to me now, considering that I went to a high school in a convent, run by nuns and here was a former nun, nudging a blatant piece of religious criticism my way.

In light of the open letter to the University of British Columbia initiated and signed by Joseph Boyden, the staff and board of Briarpatch Magazine have collectively decided that our partnership with Mr. Boyden as one of the Writing in the Margins contest judges cannot continue.

Writing in the margins – from the margins, and about the margins – takes courage. Our writing contest has been, and must continue to be, a safe place for emerging writers to submit courageous stories.

13) Women have a right to be heard and respected

Lawrence Hill, The Globe and Mail

As a volunteer with Book Clubs for Inmates, I have visited with women inmates in book clubs in federal penitentiaries in Ontario and Quebec. I will do so again soon in Saskatchewan and B.C. Sometimes, the kindest thing to do for a person is to sit with them behind bars, forget what they did, and focus on what they think about that book which is open in their hands, listen to them dream and talk about the lives they would like to live when they reintegrate into society.

I have also been a volunteer for 35 years with Crossroads International, which promotes grassroots community economic development for girls and women in Africa.

Ontario just elected its youngest MPP in history and he is a staunch home-schooled social conservative who lives with his parents and describes himself as "100 percent pro-life."

No wonder people are protesting all over the US. It’s going to be a groundbreakingly horrible presidency. Previously fringe discourse - casual condemnation of Muslims, Mexicans, unashamedly misogynistic and racist drivel - is now coming from the main stage of US politics. From forced deportations to the new Mexican wall, chilling and provocative policy proposals just keep on coming. Hard right groups and fanatical reactionaries are rejoicing, and from what I hear from US friends, minorities and most straight-thinking people are shuttling between deep anxiety and outrage.