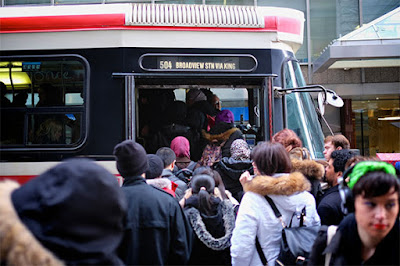 Almost no group of people in Toronto has paid more directly  for the shortsighted, austerity oriented agenda of its political class than have transit riders.

The city's government (and by proxy the provincial and federal governments) -- all while claiming to want to improve transit and encourage higher ridership -- has essentially declared war on TTC users with ever increasing fares and plans for what is shaping up to be a nightmarish roll out of the new "Presto" system.

At times it seems that the city is intent on actually discouraging people from using our public transit system.

This is not the only fare that will, yet again, be going up. In fact there is a long list of them:

While the $3.25 cash fare will remain the same, that is only because it was just increased by 25 cents within the last year!

All of this is happening as Mayor John Tory has forced the TTC to cut its budget by 2.6% as part of his cookie-cutter approach to cutbacks to city departments, and as he barrels ahead with the increasingly idiotic vanity SmartTrack plan and the white elephant one-stop multi-billion dollar Scarborough subway boondoggle.

While city politicians try to scapegoat alleged fare evaders and kids, the fact remains that the TTC has been underfunded and has depended far too much on the fare box for its budget directly due to a desire to keep property (on a municipal level) and income and corporate taxes (on a provincial and federal level) low.

Nowhere was an example of this thinking more clear than in John Tory's first budget -- supported by every single 'progressive' on City Council -- which contained an annual property tax increase on the average Toronto home of only $83,  a figure that was lower than that year's $93 annual TTC Metropass fare increase for transit users!

Rising fares, of course, act as a disincentive to riders using the system, a fact that both undermines desperately needed efforts to get people out of their cars and that has the circular effect of contributing to fewer fares being paid thereby increasing the likely need for another fare hike down the road as long as fares remain so central to TTC funding.

It also has a disproportionate impact on the people who can least afford it in our city given that young people, people living in poverty, people on social assistance and fixed incomes and people from lower income brackets and marginalized communities rely on public transit for transportation, social inclusion and freedom of movement the most.

Another example in a very long list of how the commitment of Toronto City Councillors and the Mayor to affordable and accessible public transit in Toronto is far more rhetorical than actual.

See also: The new TTC youth fare rules are a revolting attack on children
Posted by Michael Laxer at 10:51 AM