The wages of liberalism is Trump 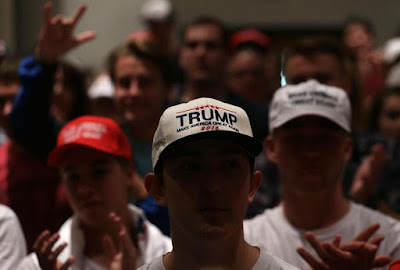 After a generation of retreat that saw its abandoning of the welfare state and of any meaningful advocacy for working people and much of the middle class in the United States, it can now truly be said that the wages of liberalism is Trump.


The victory of Donald Trump in the American election signifies a number of things many of which are profoundly dangerous.

Using much of the rhetoric of the populist far right, Trump ran a campaign that advocated for policies that were overtly racist and bigoted. His own personal misogyny was exposed repeatedly and his campaign harnessed and embraced the misogyny and the conspiracy theories directed Hillary Clinton's way by the American alt right.

That this misogyny and disproportionately vitriolic contempt and loathing for Clinton, not confined to the right alone at all, played a significant role in her defeat is very clear.

But Trump also signaled a desire to repudiate the globalization and trade deals that have caused so much pain for American working people and he expressed a sentiment that America should withdraw itself from foreign entanglements and alliances to focus on somehow making itself "great again" for Americans. He promised to take on the "elites" and to fight for regular people and the American worker.

Liberals and people on the left often forget that right wing populism always embraces some elements, at least rhetorically, of anti-capitalism and anti-elitism and this embrace of this rhetoric is all the more effective if the left has ceded much of the ground on this front.

American liberals and liberalism have done precisely that.

All through the election we kept seeing articles and Democratic politicians and mouthpieces going on about how qualified Clinton was to be President -- which she unquestionably was -- with no apparent sense that the ground had shifted and that we are in an era of increasingly broad, though unfocused, revolt against institutions of power. A revolt that the mainstream progressives and left have almost entirely failed to adapt to.

Being "qualified" in having been a major part of the horribly bankrupt and vicious politics of the neo-liberal era is hardly a plus to its many millions of victims, a point that liberals simply did not seem to understand at all.

This has been a terrible thirty years from any perspective when it comes to income inequality and the rights of working people. The working class, women, the racialized and the marginalized have suffered both enormously more than most while also being abandoned by mainstream politicians and their narratives basically entirely when it comes to economics. At the same time the sense of social and job security and of stability among middle-class Americans has vanished with many families that are nominally middle-class being deeply in debt and just a paycheque or two away from potential bankruptcy or destitution.

This creates a profound and pervasive sense of social dislocation.

Much of the worst damage actually happened under Democrats. It should never be forgotten that it was Bill Clinton who helped to destroy the American liberal post-war state. Nor the role the Clinton Presidency played in the passing of sweeping and deeply racist crime bills that imprisoned and also disenfranchised millions of people-of-colour in the United States.


The Clintons’ neoliberal economic policies—principally, the repeal of the Glass-Steagall banking legislation, apparently under the influence of Wall Street’s money—have also hurt [Martin Luther] King’s cause. The Clinton Machine—celebrated by the centrist wing of the Democratic Party, white and black—did produce economic growth. But it came at the expense of poor people (more hopeless and prison-bound) and working people (also decimated by the Clinton-sponsored North American Free Trade Agreement).

The failure to turn away from this track record pushed many on the left to repudiate the Clinton candidacy as when in Jacobin we read "As feminist scholar bell hooks put it, explaining why she cannot support Hillary Clinton, there are “certain things that I don’t want to cosign in the name of feminism that I think are militarist, imperialist, white supremacist.” Quoting James Baldwin, she urges us to ask an important question: “who are you and what do you stand for”?

It was bizarre, as so many apologists for Clinton and the Democrats did, to go on about the alleged achievements of 'incrementalism' or Democratic governance when it is easy to prove that the United States has gone dramatically to the right in every meaningful economic sense and when inequality is greater than it has been since the 1920s.

This did not change in any real way at all under Obama, a fact that is easily demonstrated.

Liberals and social democrats have failed workers and people living in poverty so spectacularly that it is impossible to overstate the extent.

This is a day-to-day lived reality for staggering numbers of people and telling those who might well be inclined to support something that rejects what has happened around them that your candidate and party are singularly qualified to stay the course due to their experience over this time in having done so, was both typically liberal and the worst form of political folly. It was a blind and bizarre self-defeating arrogance, that was profoundly, truly, madly, deeply foolhardy in its timing.

Celebrating the embrace of Clinton by much of the Wall St. and corporate media establishment and by many of the United States' most prominent neo-liberals (including many Republicans) could not have been more poorly thought out and seemed to simply ignore how close Bernie Sanders had come to winning the Democratic nomination by playing to broad themes of populism and political insurgency.

Liberals showed themselves to be almost stunningly tone deaf to the very real pulse of desperation and anger that has been so obviously building in the USA and elsewhere since the financial collapse of 2008.

Clinton's loss of the rust belt states, which have been effected so negatively by the types of free trade deals that Bill Clinton and Obama promoted, implemented and advocated for, is entirely predictable under these circumstances despite her tepid and late conversion to opposing the TPP.

While a very small majority of those at the lowest end of the income scale (52%) voted for her, this is a dramatic decline from the 60% who voted for Obama.

Clinton also appears to have failed to mobilize African-American voters to the extent that Obama did and Trump's share of the Hispanic vote appears to have actually increased or at least stayed level with that received by Mitt Romney in 2012.

Clinton did win among women voters overall, but lost among white women voters and to almost the same degree that Obama did.

While it is difficult to fully analyse the reasons for a defeat the morning after and while the objective conditions that led here will be brought into greater focus in the coming days, it is clear that the baggage of liberalism's failures and of the ultimate hollowness of the Obama Administration that had been launched on what was the bankrupt optimism of rhetorical cries for hope and change weighed Clinton down greatly.

And it was a baggage that she not only did not jettison but that she embraced.

Now enough disenchanted voters who felt disenfranchised by the system have embraced a megalomaniac, racist, loose-cannon to put Trump in the White House.

With this we enter into a terribly dangerous period domestically for the United States as Republicans, who will feel beholden to him and his agenda now at least to some degree due to its triumph, also control the House and the Senate.

Internationally he is a great threat as well as Trump has called for overtly racist and dangerous actions from "bombing the shit out of ISIS", to bombing Libya, to killing the families of 'terrorists', to banning all Muslims from the US, to building a wall between the US and Mexico and so on.

What demented ideas will spring into his head as President remain to be seen.

On this front, recent history does not bode well.

Postscript: Released subsequent to this analysis and pertinent to it, it also appears that voter turnout was low and that this was pronounced in areas critical to Clinton as many simply stayed home:

Often as critical to understanding  what happened in an election is not simply who voted, but also who did not.

Posted by Michael Laxer at 6:35 AM