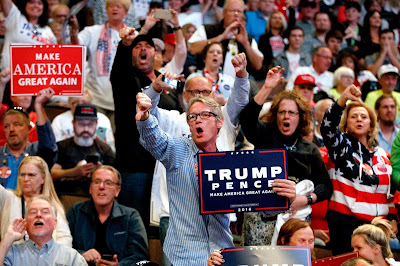 This list covers the week of November 6 - November 13. It is in order of date of the article's  release. Needless to say, this week's roundup is dominated by the American election and the victory of Donald Trump.

A black Ontario teenager who saw charges against him dropped after video emerged of his encounter with officers says police should be required to wear body cameras.

Jake Anderson was 17 when he was arrested and charged with public intoxication, assaulting a police officer and resisting arrest in Chatham on July 25, 2015.

After news surfaced a month later of surveillance video that captured part of the incident in the southwestern Ontario community, the charges were dropped.

The 2016 presidential election is widely regarded as a contest between the two most unpopular candidates in a generation, if not all time. The lion’s share of the attention has focused on the spectacle of Donald Trump, the wealthy real-estate mogul and television personality who has succeeded in capturing the Republican Party nomination in large part due to his capacity to manipulate a mass media system that has long favored sensation over substance.

A suburban town in Germany is building a 13ft-high stone wall to separate residents from refugees living at a nearby migrant accommodation facility.

Officials from Neuperlach Sud, outside Munich, said the prospect of a wall was raised after locals complained about 160 unaccompanied young refugees moving into the area.

4) Donald Trump is moving to the White House, and liberals put him there

A month ago I tried to write a column proposing mean nicknames for president-elect Donald Trump, on the basis that it would be funny to turn the tables on him for the cruel diminutives he applied to others.

I couldn’t pull it off. There is a darkness about Trump that negates that sort of humor: a folly so bewildering, an incompetence so profound that no insult could plumb its depths.

The election of Donald Trump to the Presidency is nothing less than a tragedy for the American republic, a tragedy for the Constitution, and a triumph for the forces, at home and abroad, of nativism, authoritarianism, misogyny, and racism. Trump’s shocking victory, his ascension to the Presidency, is a sickening event in the history of the United States and liberal democracy. On January 20, 2017, we will bid farewell to the first African-American President—a man of integrity, dignity, and generous spirit—and witness the inauguration of a con who did little to spurn endorsement by forces of xenophobia and white supremacy. It is impossible to react to this moment with anything less than revulsion and profound anxiety.

Election Day 2016 was a miserable failure for the Democratic Party. When all the votes are counted, it appears that Donald Trump will have won 30 states and at least 300 Electoral College votes. After months of tough talk, Democrats not only lost the presidency, but lost the Senate and continued to lose the House. It was a thorough drubbing. Calling it anything other than that is a damn lie.

A Conservative leadership contender has suggested the same movement that made Donald Trump the next United States president should be replicated in Canada.

8) A List of Pro-Women, Pro-Immigrant, Pro-Earth, Anti-Bigotry Organizations That Need Your Support

Donald Trump has been a vocal advocate of sexual assault, Islamophobia, xenophobia, and violent racism. Early Wednesday morning, America voted to elect him our president.

Here are a few organizations that work to fight for the rights of our most vulnerable populations, and ways you can volunteer or donate to make sure they are able to work harder than ever.

When it became nightmarishly clear on Tuesday night that Donald Trump was going to become our next president, a startling amount of women in my social media feeds posted a version of this phrase: “Never underestimate how much America hates women.”

10) Trudeau not ‘living up’ to a climate-change promise, says U.K. think-tank in fossil-fuel subsidy report card

Close to the anniversary of a major United Nations climate-change agreement in Paris last December, the year-old Liberal government seems poised to go back on one of its climate-related election promises, says a report from a U.K.-based think-tank.

After recommitting himself to ending fossil-fuel subsidization at the G20 leaders’ summit in China two months ago, though offering no timeline, Prime Minister Justin Trudeau doesn’t appear to be “living up” to his promises, the report from InfluenceMap says.

Police are investigating a wave of alleged hate crimes against Muslims, Hispanic Americans, black people, ethnic minorities and the LGBT community in the wake of the US election.

Attackers professing support for Donald Trump have been accused of numerous attacks in the 24 hours following his shock victory, including death threats, physical assaults and racist graffiti.

Conservative leadership candidate Kellie Leitch is defending herself against criticism she's using Donald Trump-style politics to try to win her bid to take charge of the party.

Leitch accused Michael Chong, another leadership hopeful, of calling her racist during a debate on CTV's Question Period.

Like labor unions everywhere, the local Plumbers & Pipefitters union in Ohio's Mahoning Valley—a historically Democratic bastion due to the influence of labor—endorsed Hillary Clinton for president in September 2015 and urged its members to vote for her. But unlike in years past, when Roland "Butch" Taylor briefed about 200 members on the union's support of Clinton and the prospective benefits of a Clinton presidency in May, the meeting didn't go well. "I got a lot of boos," he recalls. "I got a lot of chatter back. And out of the group, only one person came up and asked me for a T-shirt."

"Right then and there, I knew something was wrong," says Taylor, who retired a few months later. "I thought, 'Well, maybe it will change as the campaign moves forward.'"

On the campaign trail, Hillary Clinton said president-elect Donald Trump is the most dangerous man to ever run for president. He’s a “moral disaster,” according to her former running mate Tim Kaine. If you believe the Democrats’ campaign rhetoric, Trump is a direct puppet of a foreign leader. At best, he’s “temperamentally unfit to be commander in chief,” as President Obama put it. For others, Trump is a literal fascist, a dictator-in-waiting who has been compared to everyone from Hitler and Mussolini to supposed Latin American strongmen.

This is the man who will now be in control of the most powerful military and state surveillance apparatus in all of history. When Trump is inaugurated in January next year, he will take charge of a sprawling, opaque, and extremely powerful national security regime with few checks and balances.

While not from the week, we are including the following article as it is pertinent and worth revisiting in light of Trump's victory.

We keep being told that the Donald Trump phenomenon means we have entered the era of post-fact politics. Yet, I would argue, post-fact politics has been tarnishing democracy for some time. Twenty-two years ago a successful businessman sent a VHS tape to Italy’s news channels. It showed him sitting in a (fake) office. He read a pre-prepared statement via an autocue.

The man’s name was Silvio Berlusconi, and he was announcing that he was, in his words, “taking the field”. The first reaction was derision. Opposition politicians saw his political project (the formation of a “movement” called Forza Italia – Go for it, Italy – just months ahead of a crucial general election) as a joke. Some claimed a stocking had been put over the camera to soften the impact of Berlusconi’s face.