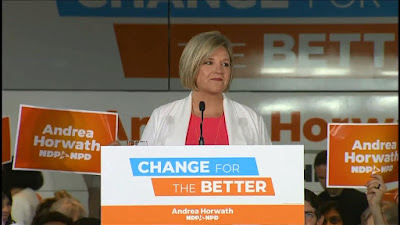 Fresh off of her appearance at an Ontario Chamber of Commerce event mere days after that group had celebrated successfully lobbying the reactionary Ford government to rip up Bill 148, worker's rights and the $15 minimum wage, Andrea Horwath, leader of the opposition and alleged anti-Ford "resistance" is at it again. 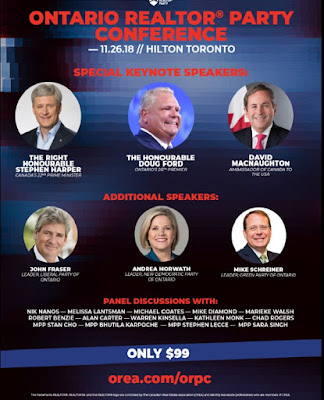 OREA is the political lobby group of real estate brokers and the province's real estate boards and their "keynote speakers" at this wonderful event are Doug Ford, Stephen Harper and Canada's Ambassador to the US.

OREA's CEO is also Tim Hudak, the former leader of the Ontario Conservatives, who pledged to fire 100,000 civil servants and introduce vicious austerity in 2014.

Have any doubt about where OREA stands? Well, they like Ford dumping rent control:


The Ford Government committed to increase rental housing supply by exempting new units from rent control. OREA advocated for this change because increased rental supply will be good news for renters looking for more choice in the market as well as mom and pop investors who work with Ontario REALTORS® in achieving financial security for their family.

Is Horwath a "keynote speaker"? Of course not.

But she will be there showing the province's real estate agents and companies just how respectable and managerial the NDP intends to be and making her resistance appearance in front of a group that is celebrating the gutting of tenant protections during a housing crisis.

The ONDP keeps telling people exactly what it is. Perhaps it is time to start listening.

See also: NDP's Horwath appears at Ontario Chamber of Commerce event mere days after the gutting of rights of workers