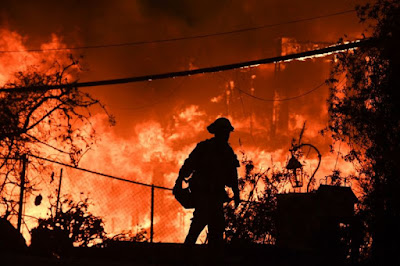 The Antarctic Circumpolar Current, the world's most influential ocean current has been noted showing behavioural changes due to global warming.

It’s common practice in the world of gaming for serious video game players to upload videos of their gaming experiences to YouTube, usually for purposes of providing tips to other gamers, walkthroughs and highlights.

3) How much money did Britain take away from India? About $45 trillion in 173 years, says top economist

Patnaik, in her essay published in Columbia University Press recently, said Britain drained out over $45 trillion from India, which to date has hampered the country's ability to come out of poverty.

5) Ocean Shock: The planet's hidden climate change beneath the waves.

The seas cover 71% of the Earth and are home to the vast majority of living things on the planet. Water temperatures are rising.

A wildfire raging in Northern California has left 80 dead and upward of 1000 missing. And now, because of the smoke, many more people in the region are breathing in dangerous, smoke-polluted air.

More than 20,000 supporters of the Socialist Party in Moldova, PSRM, gathered on Sunday in the main square of the capital, Chisinau, to cheer the kick-off to the party's campaign for the parliamentary elections due on February 24.

8) 'It's a crisis': Lack of affordable housing leaves Islanders with no place to go

'We have people living in vehicles, who are parked in people's back yards'

The Oka Crisis may have happened nearly three decades ago, but Mohawk activist Ellen Gabriel fears that Canada is at risk of making the same mistakes again.

As the death toll from the Camp Fire rises to 77, California is combating its deadliest fire in state history using prison labor. Some 1,500 of the 9,400 firefighters currently battling fires in California are incarcerated. They make just a dollar an hour but are rarely eligible to get jobs as firefighters after their release. According to some estimates, California saves up to $100 million a year by using prison labor to fight its biggest environmental problem. In September, the Democracy Now! team traveled to the Delta Conservation Camp in Northern California, a low-security prison where more than 100 men are imprisoned. We interviewed incarcerated firefighters who had just returned from a 24-hour shift fighting the Snell Fire in Napa County.

Ohio Republicans are considering a bill during the lame-duck session that would redefine and ban abortion, and potentially punish people with severe criminal penalties if they perform or undergo an abortion, according to local public radio station WOSU.

"The State chose to pass a law it knew was unconstitutional to endorse a decades-long campaign, fueled by national interest groups, to ask the Supreme Court to overturn Roe v. Wade."

Canada needs a special criminal charge to cover extended campaigns of physical and emotional abuse that amount to torture, say two Nova Scotia nurses who are in Geneva to try to shame the country before a United Nations body.

15) When left-leaning parties support austerity, their voters start to embrace the far right

My research in Hungary and Poland suggests that the right-wing populism’s rise and center-left parties’ decline result from the same process: blue-collar supporters shifting away from the left to embrace the populist right.

Today on the anniversary of the Mexican revolution, we recognize the Morelos commune, the first experience of Campesinos-workers democracy in Latin America:

The judge in Michigan ruled that the Iraqis must be released because their country will never agree to their return. Most are members of religious minorities.

New protests broke out in Chile’s capital of Santiago to demonstrate against last week’s police killing of the young Mapuche land rights defender Camilo Catrillanca, and to demand the resignation of Interior Minister Andres Chadwick. The Carabinero National Police arrested around 30 demonstrators during the protest.

18) Postcards from Popular Power in Venezuela

“Socialism still stands as a strategic horizon” – this was one of the conclusions of a recent conference on popular power and economic policy held in Caracas.

19) Juries have no place in rape trials. They simply can’t be trusted

The conviction rates for rape have long been shockingly low. This is what has led one Labour MP, Ann Coffey, today to suggest doing away with juries in rape trials.

20) REVOLUTIONARY RAPPER VIC MENSA ON PALESTINE, THE CHICAGO POLICE, AND THE POISONING OF FLINT

THE CHICAGO-BASED hip-hop artist Vic Mensa has emerged as one of the most uncompromising political voices of our time. He is a 25-year old artist who not only raps about Chicago police killings of black and brown people, about apartheid in Palestine, the poisoning of the water in Flint, Michigan, but he also goes to where the silence is and speaks out. In the aftermath of the police shooting of Laquan MacDonald, Mensa was in the streets and gave voice to the movement that led to the conviction of second-degree murder for Chicago Police officer Jason Van Dyke. Mensa has traveled in Palestine with the poet Aja Monet and he has gone to Flint to help amplify the voices of a community that was poisoned and continues to be poisoned.  During the Standing Rock movement, he joined to support the water protectors fighting against the Dakota Access Pipeline. He speaks about his activism, what he saw in Palestine, being a gun owner who supports gun control, and the revolutionary figures that inspire his work.

21) Colombia's hidden victims finally get their day in court

A new special tribunal, a provision of the 2016 peace deal, is forcing the country to reckon with the sexual violence of its past.

Australians are working an average of six hours’ unpaid overtime a week, a total of $106bn of free work given to employers every year.

Biologists are attempting to assess damage to vulnerable wildlife caused by Newfoundland’s largest-ever oil spill, amid fears that the full scale of devastation may never be known.

Bill 47 is a major attack on workers across Ontario. It freezes the minimum wage for 33 months (amounting to a pay cut), eliminates two paid sick days and reduces the number of unpaid sick days from a possible 8 to 3, it revokes equal pay for part-time, contract and temp workers, and cancels the fairer scheduling provisions that were set to take effect on January 1, 2019. This will disproportionately affect those most concentrated in low paying and precarious jobs: Indigenous, migrant and racialized workers, especially women.

27) How America’s Perpetual Warfare Abroad Is Fueling an Increase in White Supremacist Violence in U.S.

America’s perpetual warfare abroad has led to an increase in white supremacist violence at home. That’s one of the key findings in Frontline PBS and ProPublica reporter A.C. Thompson’s new investigation, “Documenting Hate: New American Nazis,” which premieres Tuesday evening on PBS. The documentary reveals the deep ties between the military and white supremacy, as Thompson examines the Pittsburgh shooting and the rise of violent hate groups such as Atomwaffen. Thompson interviews historian Kathleen Belew, who says there has always been a correlation in the U.S. between the aftermath of war and the rise of white supremacist violence. “If you look, for instance, at the surges in Ku Klux Klan membership, they align more consistently with the return of veterans from combat and the aftermath of war than they do with anti-immigration, populism, economic hardship or any of the other factors that historians have typically used to explain them,” she notes. We speak with A.C. Thompson in Boston. His investigation premieres Tuesday on PBS stations and online.

As an organiser with the Ontario Coalition Against Poverty (OCAP) in Toronto, I am only too aware of how much worse the homeless crisis has become in this City over the last three years. As a result of community pressure, City Hall issues a daily shelter census. In a whole series of ways, the official process understates the problem but the picture that emerges is, nonetheless, quite dreadful.  In the largest and wealthiest city in Canada, the homeless shelters are bursting at the seams.

29) He Died Giving a Voice to Chile’s Poor. A Quest for Justice Took Decades.

The activist folk singer Victor Jara was murdered in the days after a 1973 coup that brought Gen. Augusto Pinochet to power. A quest for his killers led to a Florida courtroom.

Human rights activists argue that the honour is inappropriate for a man who described raping a maid in his memoir.

31) The Left is not immune to the patriarchy

The Victorian state election is on this Saturday and if I’m being honest, I don’t think I could be less inspired about it if I tried. I want readers to understand just how much of a statement this is coming from me. I loathe our political system and most of our politicians but being an Aboriginal woman who works in the union movement and writes opinion, I am deeply invested in it all.

Tunisian civil servants have gone on strike around the country to protest the failure of negotiations with the government for wage increases, as buying power plunges and inflation soars.

HOW MANY PEOPLE have been killed in the post-9/11 war on terror? The question is a contentious one, as there has been no formal accounting for the deadly cost of the initial U.S. interventions in Iraq and Afghanistan, not to mention the secondary conflicts that continue to wreak havoc across the Middle East and the opaque, covert war still expanding across Asia and Africa.

35) For people suffering under austerity Corbyn is the answer, not the EU

Forget a ‘people’s vote’: reversing Brexit would be a terrible betrayal of the people left behind by the EU’s neoliberal agenda.

“As Indigenous people, we’ve been taught by our elders to give thanks every day. We are a people who have survived genocide," said rally organizers from UAINE.

Despite the fact that only 18 percent of the Latin American population lives in rural areas, poverty affects now 59 million rural inhabitants, of which 27 million suffer extreme poverty.

Israeli intelligence officials desperately tried to prevent Ronen Bergman from writing “Rise and Kill First: The Secret History of Israel’s Targeted Assassinations,” a stunning book exposing the details of Israel’s extrajudicial killing program. Israel even changed and extended secrecy laws to prevent Bergman from gaining access to historical documents. Despite this, Bergman gained unprecedented access while writing the book, scouring thousands of documents and meeting with some 1,000 sources. The result is a stunning investigation that dives deep into the targeted killing programs of Israel, which has assassinated more people than any other country in the Western world since World War II. We speak with Ronen Bergman about Israel’s many attempts to kill the former chair of the Palestine Liberation Organization, Yasser Arafat, and the possibility that they succeeded.

In a massive new report, federal scientists contradict President Trump and assert that climate change is an intensifying danger to the United States. Too bad it came out on a holiday.