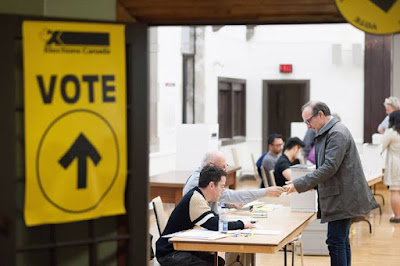 The federal Conservatives have gone full tin foil hat in their latest email attempt to terrify their voting base with conspiracy nonsense.

In a fundraising missive that literally begins with the outrageous framing "The Liberals are bringing back voter fraud", Stephen McCreary, the "Digital Director" of the party, claims that potentially re-allowing Voter ID cards as one of the things that can be used to vote could be "more than enough to swing an election in their favour."

The full email (which I received tonight at 7:02 pm) is pictured here: 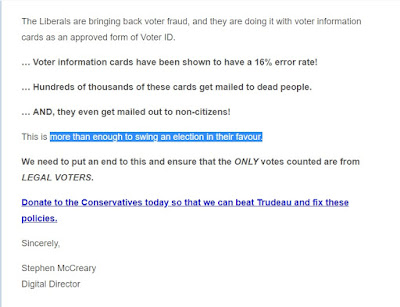 Of course, this is all complete nonsense.

What has happened is that in 2016 Elections Canada -- an entirely non-partisan governmental agency -- recommended green-lighting the use of Voter ID cards as one of the forms of proof of identity that you could provide in order to vote, though it would never be the sole one. You would still have to provide at least one further proof of identity.

The Liberals have agreed to do this and have introduced a bill to this effect. Entirely correctly Liberal MP Andy Fillmore, parliamentary secretary to the minister of democratic institutions, stated that "the main challenge for our electoral democracy is not voter fraud but voter participation." I think there are far deeper reasons that people stay home on election day than not being able to use this card, but there is no doubt that allowing easier access to voting, which is always vilified and opposed by the right, is more fair and democratic as it is primarily people living in poverty, the racialized and the marginalized who have issues around identification.

As the Conservatives feel that these are folks who are less likely to vote for them they are more inclined to create obstacles to voting that will not be obstacles at all to middle-class, upper-middle class or wealthy voters.

The scaremongering of the email is ludicrous.

Even if you assume that all of the "facts" presented here are true, the "errors" are just as likely to be sent (proportionally) to people inclined to vote for the Conservatives, the NDP or Greens as they are to be sent to potential Liberal voters.

Additionally, as already noted, the Voter ID cards will not be allowed to be used without further corroborating documentation and proof.

The idea that the Liberals or anyone else could somehow mobilize all of the people who received a card in error or with an error (though they would have no idea who or where these people are), manage to coordinate them showing up on election day with fake or misleading backup proof of residence and convince them all to vote Liberal is absurd to the point of making Fox News look rational.

It is transparently idiotic.

Yet it plays not only to the increasingly outlandish conspiracy narratives of the right, it also hauls out the anti-immigrant dog-whistle.

"AND, they even get mailed out to non-citizens!"

This is followed up with an all-caps emphasis on "LEGAL VOTERS". No subtlety there!

Is there any evidence that hordes of non-citizens will be incorrectly receiving Voter ID cards that they will then use, en masse, to illegally vote Liberal to derail the chances of right-thinking "real" Canadians electing a proper Conservative government?

No. There is none whatsoever. This notion only exists in the minds of right-wingers who somehow feel besieged and threatened by the "other".

This is what makes narratives and emails like this from the Conservatives so dangerous. It is not that the Liberals are the target or that one should fetishize the act of voting. It is that they are transparently attempting to inflame fictional fears about immigrants and voters from marginalized and racialized communities in ways that play to the ugliest, most bigoted threads becoming ever more prevalent within mainstream right wing discourse and thinking.