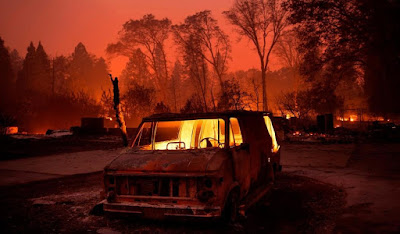 Dominic Alexander debunks the myths used by politicians and historians to rebrand ‘the war to end all wars’ in the centenary of Armistice Day.

Kim Soo-jin will never forget the disgusting taste of the pulpy green-brown traditional Korean brew she drank in the hopes of ending her pregnancy, or the night she spent in pain, curled into a ball and unable to move.

A rape victim is facing 20 years in jail charged with attempted murder, after she gave birth to her abuser’s baby in a latrine in El Salvador.

They call themselves Disrupt, and they’re ready for change.

Fire investigators in Northern California say they found the human remains of 6 more individuals, bringing the death toll to at least 48 people who have died in the wildfire that burned through the town of Paradise with shocking speed, making the Camp Fire the deadliest wildfire in state history.

8) AS WILDFIRE SMOKE FILLS THE AIR, FARMWORKERS CONTINUE TO LABOR IN THE FIELDS

As fires clogged the air in Southern California, farmworkers continued to work, even as public-school students and others were told to stay home and indoors.

In response to the raging brush fires ravaging Southern California, President Trump on Friday approved an emergency measure to provide federal funds to help combat the blazes. But in a tweet fired off the following day, Trump threatened to withdraw the aid, blaming the state’s alleged poor “forest management” for the destruction.

When she was 17 years old, Liz was coerced by a Children’s Aid worker into having an abortion and being sterilized at a northwestern Ontario hospital, she says it’s an experience she’s carried for 40 years.

12) After 17 years, many Afghans blame US for unending war

When U.S. forces and their Afghan allies rode into Kabul in November 2001 they were greeted as liberators. But after 17 years of war, the Taliban have retaken half the country, security is worse than it’s ever been, and many Afghans place the blame squarely on the Americans.

Tuesday marked the start of “freshman orientation” in Washington, D.C., where new members of Congress arrived to meet their colleagues and learn how the House and Senate actually work.


14) When it comes to Saudi LAV sales, lobbyists will likely rule

Will they cancel the contract or won’t they? In order to understand Ottawa’s decision making process regarding General Dynamics’ massive arms deal with Saudi Arabia one must look closely at industry lobbyists.

Andy Blatchford, The Globe and Mail

The Canadian government is showing no signs of toughening its stance on arms sales to Saudi Arabia, even after Canada’s spy chief heard a recording of the killing of journalist Jamal Khashoggi.

17) The Earth is in a death spiral. It will take radical action to save us

Climate breakdown could be rapid and unpredictable. We can no longer tinker around the edges and hope minor changes will avert collapse

18) Death of an English major

I did not anticipate this death. No one warned me that being chair of an English Department meant that I would have to “manage” the grief, despair and rage caused by the political murder of one of our students.

Listing the bills he will submit as a lawmaker, the son of Brazil’s President-elect Jair Bolsonaro, Eduardo, said he will not hesitate to criminalize social movements like the Landless Workers' Movement (MST) and ban opposition political parties “if necessary.”

The decision comes after Brazil's far-right president-elect Jair Bolsonaro criticized the program and the Cuban government.

21) U.S. HAS SPENT SIX TRILLION DOLLARS ON WARS THAT KILLED HALF A MILLION PEOPLE SINCE 9/11, REPORT SAYS

The United States has spent nearly $6 trillion on wars that directly contributed to the deaths of around 500,000 people since the 9/11 attacks of 2001.

The term ‘sex work’ has come to replace the word ‘prostitution’ in contemporary discussions on the subject. This is not accidental. The phrase ‘sex work’ has been adopted by liberal feminists and powerful lobbyists in a deliberate attempt to steer the narrative on prostitution.

Thousands of people gathered for the funeral of Turkish union leader, Abdullah Karacan, the day after he was fatally shot during a visit to meet workers at a Goodyear tyre factory in Adapazarı.

Amazon has selected a pair of cities to host its new, expanded headquarters: Crystal City in Arlington, Virginia, and Long Island City in Queens, New York. Amazon’s decision came after a 14-month search that saw cities around the U.S. promise tax breaks, taxpayer-funded infrastructure and business-friendly ordinances in an effort to win what Amazon says will be $5 billion in new investment and thousands of jobs. Democratic Virginia Governor Ralph Northam called the Amazon headquarter “a big win for Virginia,” and New York City Mayor Bill de Blasio has similarly applauded Amazon’s decision. But many local politicians have openly criticized authorities in New York and Virginia for backing the deals, which will create a total of 50,000 jobs. We host a roundtable discussion about Amazon and corporate welfare. In New York, we speak with Ron Kim, member of the New York State Assembly. He recently co-wrote an opinion piece for The New York Times headlined “New York Should Say No to Amazon.” In Washington, D.C., we speak with Greg LeRoy, executive director of Good Jobs First, a watchdog group on economic development incentives. And in Portland, Maine, we speak with Stacy Mitchell, co-director of the Institute for Local Self-Reliance. She is the author of “Big-Box Swindle: The True Cost of Mega-Retailers and the Fight for America’s Independent Businesses.”

25) Instead of Giving Billions to Amazon, We Could Just Cancel Student Debt

On Tuesday, Amazon confirmed it would build new offices in Long Island City, Queens, and a suburb of Washington, DC, called Crystal City, ending a massive bidding war that saw the leaders of almost 250 cities prostrate themselves at the feet of the world's richest man.

Protests were held in Ireland Wednesday after a teenage girl's underwear was used as evidence against her in the trial last week of a man accused of raping her.

Wendy Stueck, The Globe and Mail

A Toronto activist and journalist who is in Vancouver to give a keynote address on racial equity was stopped by police near Stanley Park on Tuesday in what he alleges was a racially based street check by police.

28) America Is Blaming Pregnant Women for Their Own Deaths

What is it like to face dying during childbirth in the richest country in the world in the 21st century?

29) No safe place: When Israeli airstrikes hit, Gaza's children have nowhere to run

A sense of normalcy returned to life in the Gaza Strip on Wednesday after a ceasefire agreement between Palestinian political parties and Israel ended a major escalation in violence.

Brazil’s president-elect Jair Bolsonaro has chosen a new foreign minister who believes climate change is part of a plot by “cultural Marxists” to stifle western economies and promote the growth of China.

Dozens of dangerous rooming houses are boarded up, but Charles LeBlanc is hoping owners will make improvements.

32) Ontario government scraps rent control and Toronto doesn't like it

Ontario Premier Doug Ford's first-ever fiscal roadmap, revealed on Thursday, could have sweeping implications across all aspects of life for almost everyone in the province.

Joe Friesen, The Globe and Mail

The Ontario government has cancelled plans to open the province’s first Francophone university despite having promised to do so during the election campaign and shortly after taking office.

The Ontario government has tabled fall economic legislation that will eliminate the Office of the Provincial Advocate for Children and Youth.

Youth workers and lawyers are joining with the Ontario child advocate to call on the Ford government to reconsider its decision to cut the position.

A Toronto-based publication widely criticized for disseminating hate speech against minorities, Jews, women and the LGBTQ community has been permanently banned from distribution through Canada Post.

The UK government has inflicted “great misery” on its people with “punitive, mean-spirited, and often callous” austerity policies driven by a political desire to undertake social re-engineering rather than economic necessity, the United Nations poverty envoy has found.

Eighty-five people have been arrested as thousands of demonstrators occupied five bridges in central London to voice their concern over the looming climate crisis.

35 years ago, to defend the rights denied to Indigenous people, the EZLN was founded.


40) Inuk woman's tell-tale botulism symptoms would have been taken seriously if she'd been white, says her widower

A man from Inukjuak said the failure of a nurse stationed in the northern Quebec community to recognize the signs of botulism cost his wife her life, and it was only after she died that clinic staff took his adult daughter's symptoms seriously.

While the right-wing government announced that they will investigate the Mapuche murder, they continue violently repressing protests.

There’s been a lot of attention given to the contentious “Heartbeat Bill,” which bans abortion at the point that a fetal heartbeat can be detected, since it passed the Ohio House earlier this week. But Republican lawmakers are considering another bill during this lame-duck session that would ban abortions entirely.