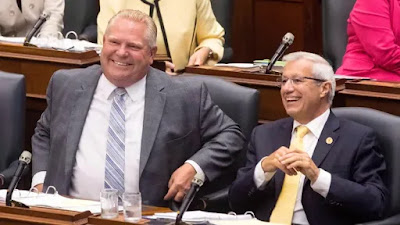 The Doug Ford Ontario government's fiscal update released today has many contemptible aspects to it.

In an obvious attempt to mute any potential criticism from independent government agencies, Ford and crew have axed the offices of the environmental commissioner and child and youth advocate. Given what the Conservatives have planned in trashing environmental protections and social programs the motives behind this are obvious and have nothing at all to do with "balancing the books".

Shamefully they also plan to eliminate rent control, again, from "new rental units" though it is not clear if this means newly listed or just newly constructed. I suspect it means both in a gift to developers and landlords that will add fuel to the terrible fire that is the Toronto housing crisis. The libertarian notion that doing this will stimulate the construction of new (and presumably ultimately affordable) rental units has already been disproved by history and reality.

While we could go on, nowhere is the ugly, anti-worker cynicism of this government and its plans more evident than in the grotesquely named LIFT (Low-income Individuals and Families ) tax credit.

The so-called LIFT, in the government's words, "would provide low-income and minimum wage workers up to $850 in Ontario Personal Income Tax relief and couples up to $1,700."

While the implication is that it will help lift working people out of poverty, what it really is is an attempted ideological replacement for the now cancelled minimum wage hike from $14 to $15 an hour.

Never mind that it will harm full time minimum wage workers far more than help them. The higher minimum wage would have meant an extra $1,553 a year for that same worker now getting a "credit" of $850. This means they are getting a "lift" by having  $703 a year taken out of their pockets by a silver spoon elitist whose entire life has been derived from inheritance and privilege.

What this disgraceful policy actually does is make everyone in the province subsidize the poverty wages that businesses are paying and that workers cannot live on.

When the government cuts taxes for any group they take revenue out of the collective public pool. In this case they are doing it to try to compensate for cancelling a desperately needed minimum wage hike that would have been entirely paid for by the private sector and, in many cases, hugely profitable global corporations like McDonald's, Pizza Hut, Amazon, etc.

This means that every single person paying taxes in Ontario is making sure the government gets less political blowback for getting those corporations and business owners off the hook for paying the wages they should be to their workers.

And the political blowback is very real.

According to a recent poll by Campaign Research the attacks by the Ford on the gains by workers made at the end of the last Liberal regime are not playing well with the public:


On recently announced labour reform rollbacks it’s clear the Ford government has a sales job to do, with a majority of Ontarians preferring the previous Liberal government’s labour policies. Most Ontarians (52%) oppose the freezing of the minimum wage at $14 until 2020 compared to 42% who support it. 56% of Ontarians oppose the roll-back of 3 hours shift payments for cancelled shifts within 48 hours compared to 34% who support it. 55% oppose the re-instatement of the requirement for doctor’s notes compared to 39% who support it. The withdrawal of the requirement for paid sick days is the least popular labour reform rollback with 77% opposed compared to 17% in favour.
On the reasons why, the Ford Government appears to be sagging, “Saying you want to make Ontario ‘open for business’ doesn’t appear to be enough justification for rolling back popular labour reforms.

Their political honeymoon seems to have been very short-lived.

Don't let them try to revive it with the utterly false and morally debased fraud that is the "LIFT".


See also: Doug Ford wants you to subsidize the poverty wages of corporations
Posted by Michael Laxer at 7:52 PM