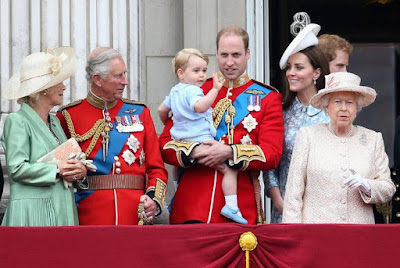 In a rare moment where he said something mildly interesting, NDP leader Jagmeet Singh questioned the relevancy of the monarchy on CTV's Question Period this past Sunday.

"I don't see the relevance of it, and I don't think that most Canadians do," Singh said, and he went on to say that becoming a republic "makes sense" though he acknowledged that this was not a policy priority for him.

These comments came up in the context of some recent revelations that former Governor General Adrienne Clarkson has been billing Canadians -- despite no longer holding the office -- to the tune of around $1 million since 2005. As the "Queen's representative" in Canada this type of excess would presumably be dispensed with if we got rid of the monarchy altogether.

The monarchy is rather expensive. It costs Canadians approximately $50.5 million a year at minimum.

This pales in comparison to what it costs the people of the United Kingdom itself. Nominally the monarchy costs them  £47.4 million annually -- or around $81 million in Canadian dollars -- via what is called the "Sovereign Grant". This is, essentially, what the British people grant these ultimate freeloaders so that they may have the privilege of being nominally ruled by them. All of this is tax free.

As we shall see, this is not the only way the royals cost the public.

The problem with the line of argument centered around cost is that bourgeois governance is expensive generally. The costs of the American Presidency, for example, when it comes to security, travel, maintaining and operating the White House, etc. is no doubt far higher than the annual grant to the British monarchy.  The President does have the virtue of being elected.

The cost of a Canadian presidential equivalent -- either elected or appointed by parliament -- that would replace the Governor General would likely also cost an amount akin to what we pay for the monarchy now and it is not simply monarchical government appointees who have been found feeding at the public trough years after they likely should have stopped.

The trouble with the monarchy as an institution is not that it is expensive, but rather that it is grotesque, medieval, ugly and fundamentally runs counter to the most basic democratic ideals.

The royal family is a disgraceful, retrograde bunch of extremely wealthy welfare cases who have done nothing whatsoever other than be born or to have married fortuitously to merit any of their immense privilege and the absurd reverence in which they are held.

The reality of this comes home through the ridiculous pomp with which they are greeted and the inane and offensive rules surrounding speaking to them or even touching them on the shoulder (a big no-no) as if they are some special class of human when they are anything but.

It would be hard to imagine a more clueless and contemptible group.

There are countless examples but just recently it was revealed yet again what a gigantic prat Prince Charles is having his shoelaces ironed, getting servants to retrieve stuff he dropped a few feet away from himself, wanting an inch of toothpaste placed on the royal toothbrush for him, etc.

Through what is straight-up feudal inheritance the Queen and the royals also get and are worth a lot more money than the "sovereign grant". None of this is money they have done anything to earn.

This is the tip of the iceberg. There are also odious examples like the $2.4 million spent to renovate the new 21 room living quarters for the public parasites Prince Harry and Meghan Markle in Kensington Palace. Overall the royal family may be worth as much as $88 billion.

Many decades ago the holdings and wealth of the royal family should have been placed fully in public hands. It is a direct holdover from feudalism and has no justification morally or democratically in the modern era even if one accepts the premises of a "constitutional monarchy".

While, as Sweden has, the British could keep the monarch but nationalize almost all of their holdings and make them what amounts to a regal public servant, at this point the far more obvious thing to do is to rip the whole rotten edifice down.

Canadians have a far smaller distance to travel to no longer be associated with an institution so intrinsically backward and at odds with our alleged democratic values. We should send the bums packing back to England where if the state insists on continuing to wipe the royal ass at least it will not be our problem.
Posted by Michael Laxer at 4:14 PM