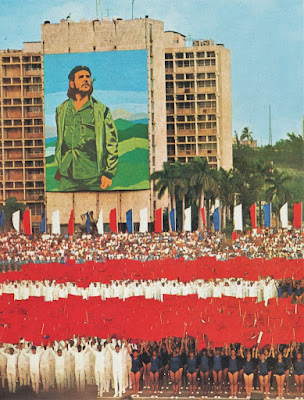 Ukraine’s parliament has officially designated the birthday of a prominent Nazi collaborator as a national holiday, while also banning a book that criticized another anti-Semitic national leader.

The Communist Party, which is outlawed in Ukraine, has nominated First Secretary of the Central Committee of the Communist Party of Ukraine Petro Symonenko as its candidate for presidential elections.

Canadian MP Niki Ashton tells Paul Jay both the NDP and the Liberals have been guilty of making progressive promises during election campaigns and legislating from the center-right once in power.

When Che Guevara derailed a train in the city of Santa Clara, the fate of the Batista regime was sealed.

4) We will move forward. And we will continue to be victorious

Speech by Miguel M. Díaz-Canel Bermúdez, President of the Councils of State and Ministers, at the close of the Second Ordinary Session of the National Assembly of People’s Power’s Ninth Legislature, Havana International Conference Center, December 22, 2018, “Year 60 of the Revolution”

It’s been six decades since the dictatorship of Batista was overthrown by a group of young revolutionaries who wanted to change the capitalist hegemony of West and establish a state inspired by Latin American Independence figures such as Jose Marti and Simon Bolivar, as well as the philosophies of Karl Marx and Vladimir Lenin.

6) After 60 years of struggle, sacrifices, efforts and victories, we see a free, independent country, the master of its own destiny

Speech by Army General Raúl Castro Ruz, First Secretary of the Communist Party of Cuba Central Committee, at the central act to commemorate the 60th anniversary of the triumph of the Revolution, in Santiago de Cuba, January 1st, 2019, “Year 61 of the Revolution”

The Communist Party of Puerto Rico wished the Cuban Revolution greater success after reaching its 60th anniversary, despite the tightening of the US financial and commercial blockade.

Early on New Year’s Day 1959—60 years ago—Cuba’s dictator Fulgencio Batista boarded a flight for the Dominican Republic. The previous day, Batista had bragged that his forces had won the decisive Battle of Santa Clara. The morning newspapers printed his side of the story. It was false. Che Guevara’s band of troops in Column 8 had taken the town and derailed a train filled with Batista’s U.S.-backed forces.

“We’re the product of 500 years of struggles: first against slavery in the independence war led by insurgents against Spain, then avoiding being absorbed by North American expansionism, then for promulgating our Constitution and expelling the French Empire from our territory, then Porfirio’s dictatorship denied the fair implementation of the Reform Laws and the people stood up with its own leaders...”

You know, it has been a while since ARC has written about the "Nazi Mom" (aka: "Aryanprincess1488") who lost her kids after she and her then husband attended an Aryan Guard rally back in 2008. For years ARC referred to Dara Graham as "Nazi Mom" but as she seems to have advertised that it was she who lost her children, well, who am I to deny her the notoriety?

Georges Loinger used all his skill and cunning – and a large dash of chutzpah – to rescue Jewish children from deportation and near-certain death during the second world war.

12) Sole Jewish lawmaker on Arab list to retire from Knesset

The Times of Israel

Communist activist and progressive attorney Dov Khenin says he will ‘join the grassroots and try to change country’s direction from the bottom up’.

Dov Khenin, who started the year by quitting the Knesset, tells Haaretz how he’d be a greater agent of change outside parliament.

The Italian Communist Party saw culture as a key political battleground. But the arrival of disco challenged its assumptions about what music should be.

Scripting a new history in Kerala's women's movement, the state witnessed a sea of women coming together to raise a formidable 'Women's Wall' or Vanitha Mathil, covering the entire length of the state. The wall was formed from 4 to 4.15pm.

The historic women's wall in Kerala:

The women’s wall with over 55 lakh women participants cutting across caste/community divide and from all walks of life, gave a strong message of unity to uphold the values of the Kerala renaissance for women’s rights and social reform.


Protesting for women's rights and equality an astonishing 5.5 million women -- organized by feminist activists and the Communist Party of India (Marxist) -- created a women's wall nearly 400 miles long across the state of Kerala.

Here is a small part of that wall including a young protester with the banner of Che.

They are demanding the right of women to be able to access religious sites and against the reactionary, anti-woman policies of the governing Bharatiya Janata Party (BJP).

Solidarity! Justice and equality rights for women! (Via The Left Chapter's Facebook Page) 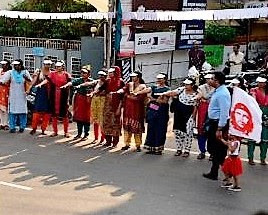 The Evo Morales administration begins registering 5.8 million citizens Jan. 2 and will invest some US$200 million in new hospitals and staff.

17) Why communists back Brexit

The Indonesian genocide was one of the great crimes of the twentieth century. Its victims were leftists who struggled against colonialism and fought for Indonesian self-determination.

The Lebanese Communist Party Thursday called on its supporters and residents across the country to participate in protests later this month in opposition to rampant corruption and social inequality in the country.

Newly installed President Jair Bolsonaro targeted Brazil's indigenous groups, descendants of slaves and the LGBT community with executive orders in the first hours of his administration, moving quickly after a campaign in which the far-right leader said he would radically overhaul many aspects of life in Latin America's largest nation.

Brazil's new far-right President Jair Bolsonaro has stripped the government department charged with protecting the country's Indigenous people of much of its responsibilities, which distressed critics say could lead to the destruction of dozens of tribes.

Brazil’s new president has authorised the dismissal of civil servants who do not share his far-right ideology, it has been reported.

23) Boots Riley Talks About a Socialist Alternative for Society

Chatting work and politics with the 'Sorry to Bother You' director.

STANDING with me on a cold corner with a sign urging bank disinvestment, a venerated comrade reminded me of the lasting value of Vladimir Lenin’s What Is To Be Done?

The Jewish National Fund of Canada, one of the country's long-established charities, has been the subject of a Canada Revenue Agency audit over a complaint that it used charitable donations to build infrastructure for the Israel Defence Forces (IDF), in violation of Canada's tax rules.

Following a march and rally of 40,000 on Saturday, December 15, the United Teachers of Los Angeles (UTLA) announced a strike date of January 10! If UTLA does strike it will be a major event for working people across the country as teachers are poised to shut down schools in the nation’s 2nd largest school district. Teachers everywhere would be encouraged to fight for smaller class sizes, funding for classrooms, and living wages in a continuation of the #RedForEd movement.

Just an hour and a half after being officially sworn in on Tuesday, the new mayor of Tlaxiaco, in Mexico's southern state of Oaxaca, has been shot dead on the street.

28) IN CANADA, THE RIGHT TO STRIKE EXISTS… UNTIL YOU TRY TO USE IT

Postal workers, power workers, teachers and bus drivers are recent victims of a disturbing trend – loss of the right to strike. In the case of members of the Canadian Union of Postal Workers, federal Liberal back-to-work legislation on November 27 put a halt to five weeks of rotating strikes. Up to then, no cross-country work stoppage occurred, and there was only a minor mail backlog. On December 20, the Conservative Ontario government passed a no strike law aimed at 6,000 Power Workers’ Union members who run hydroelectric stations and nuclear plants; this occurred before any job action began. Back in the Spring, a Liberal Ontario regime broke the strike of teaching assistants, members of CUPE Local 3903, at York University. In May 2015, Queen’s Park stopped secondary school teachers from exercising their ‘right to strike’ at three school boards. In 2009, the government imposed a back-to-work law on striking Toronto Transit Commission workers.

Spain’s far right is enjoying its biggest breakthrough since the 1970s. But it grows from a reactionary swamp that has festered ever since Franco’s dictatorship.

31) For solidarity without borders

Throughout 2018, U.S. newscasters hung on every irrational and obnoxious tweet by Donald Trump. But many workers and oppressed people around the world had little time for that — they were busy with the sensible task of coming together to fight rising repression and exploitation.

The Socialist Party of Nigeria (SPN) FCT Chapter has asked the federal government to stop spending huge sums of money on political office holders and implement the N30,000 minimum wage for workers.

33) She was grabbed, endured sexual taunts and followed into the washroom. The WSIB says this wasn’t workplace harassment