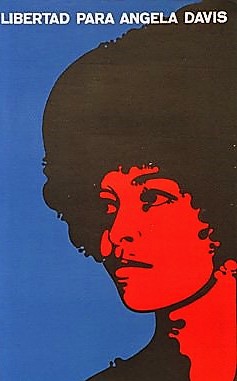 A Cuban solidarity poster from when American freedom fighter and communist activist Angela Davis was imprisoned for 16 months -- some of it in solitary confinement -- in the early 1970s on trumped up murder charges. In July, 1972 she was acquitted on all counts at trial, but only after an international solidarity campaign put the injustice of what was happening to her in the spotlight.

Davis has fought for the oppressed both in the United States and globally her entire life and was rightly due to receive an award in February for her tremendous legacy and courage from the Birmingham Civil Rights Institute. In a remarkable act of cowardice the institute rescinded the award earlier this month as a result of pressure from pro-Israel lobbyists who oppose her stance in solidarity with the Palestinian people resisting the illegal Israeli occupation. The institute has since apologized for this action, but the gala remains cancelled and the damage done.

As Mairav Zonszein noted in The Nation:

...this incident is not occurring in a vacuum. It is the latest in a long-standing and widespread campaign to shut down those who are critical of Israeli policies and, specifically, those who promote Palestinian equal rights and BDS. Between 2014 and 2017, the nonprofit organization Palestine Legal dealt with nearly 1,000 incidents of censorship, intimidation, and suppression targeting speech supportive of Palestinian rights.

Responding to this outrageous decision and reflecting on her support of the justice of the Palestinian cause Davis wrote:

This seemed particularly unfortunate, given that my own freedom was secured – and indeed my life was saved – by a vast international movement. And I have devoted much of my own activism to international solidarity and, specifically, to linking struggles in other parts of the world to U.S. grassroots campaigns against police violence, the prison industrial complex, and racism more broadly.  The rescinding of this invitation was thus not primarily an attack against me but rather against the spirit of the indivisibility of justice.

‘An attack against the spirit of the indivisibility of justice’: Angela Y. Davis statement on the cancellation of Birmingham Civil Rights Institute award

Why Jewish Organizations Should Not Be Tearing Down Angela Davis

Posted by Michael Laxer at 9:06 AM