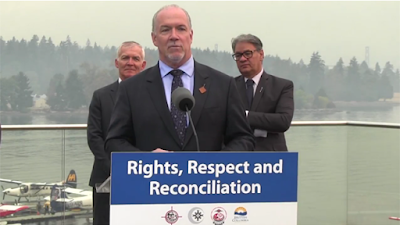 After setting up an exclusion zone so that media and supporters could not see what was going on, RCMP officers in British Columbia armed with assault and sniper rifles invaded Wet'suwet'en territory and arrested 14 peaceful community members who were guarding their lands at a checkpoint on Monday night.

Seeking to enforce a colonialist court issued injunction the RCMP were also targeting a similar checkpoint at the Unist’ot’en camp. Negotiations to find a resolution to the situation ended Wednesday night with the hereditary leadership of the Wet'suwet'en Nation agreeing to allow Coastal GasLink workers access to the territory under certain conditions, though really they were negotiating under extreme duress.

(UPDATE: The Wet’suwet’en Hereditary Chiefs released a statement stating that "This Is Not Over". It opens by noting the threat of state violence:


On January 7th at the Gidumt’en access point, the RCMP used excessive and brutal force. We expected a large response, we did not expect a military level invasion where our unarmed women and elders were faced with automatic weapons and bulldozers.
While the chiefs have a responsibility to protect the land, they also have a duty to protect our land defenders. Our people faced an incredible risk of injury or death and that is not a risk we are willing to take for an interim injunction.  The agreement we made allows Coastal GasLink to temporarily work behind the Unist’ot’en gate. This will continue to be a waste of their time and resources as they will not be building a pipeline in our traditional territory. -Read the full statement.) 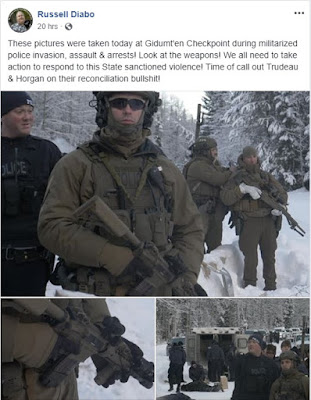 So it was more than a bit rich for BC NDP Premier Horgan to prattle on early Wednesday in Victoria about how he is ""confident" there will be a "peaceful resolution"". That ship had already sailed John. It sailed centuries ago and it had surely sailed here as the RCMP fulfilled yet again its historic role to perpetrate state violence against Indigenous people on behalf of corporations, Canadian courts and the resource sector of the Canadian economy.

CBC broadcaster and activist Jesse Wente noted at a rally in Toronto on Tuesday that "Reconciliation does not come at the end of a gun". But for Horgan, it would seem, "peaceful resolution" does flow out of the threat of the barrel of the gun.  As the Tyee reminded us that threat is very real and the state violence it represents has happened before countless times including the last time the NDP reigned in BC:


The Gustafsen Lake Standoff happened in the summer of 1995 in the Secwepemec (Shuswap) region. A Sundance ceremony, which takes a month to complete, was being held when relations with a rancher who claimed ranging rights over the land turned hostile.
The standoff began Aug. 18 and ended Sept. 17. More than 400 RCMP officers, supported by military advisers, blockaded the camp. Landmines were used to block access, police were heavily armed and helicopters and airplanes were used for surveillance. The police operation cost more than $4.5 million.
No one died in the standoff, although tens of thousands of shots were fired and two people were wounded.

One might be startled at Horgan's indifference to history or his cynicism had it not already been on full display when he said "There has been over 150 years of disappointment in British Columbia. I'm not the first to stand before you and disappoint Indigenous people" while green-lighting the odious Site C dam back in 2017. Just today "In a rare rebuke, the United Nations has instructed Canada to suspend construction of the Site C dam on B.C.’s Peace River until the project obtains the “free, prior and informed consent” of Indigenous peoples.".

Wonder what "progressive" jargon Horgan will use to justify ignoring this? We will find out soon enough.

In addition to expressing his alleged wish for a "peaceful resolution" Horgan could not resist taking cheap shots at activists across Canada even dabbling in a little red-baiting by saying some of them "were...talking about eradicating capitalism".

Perish the thought! Tommy Douglas used to do that. You might want to look it up.

Horgan was also unable to refrain -- as the little "progressive" minion of the capitalist state that he is -- from trotting out the usual rubbish about how the defenders of the land were "breaking the law and there are consequences for that." Canadian law rammed down the throats of peoples who do not accept its jurisdiction has long been used to justify the worst violence and genocidal policies against Indigenous people. Horrors like the residential school system were all entirely legal and enforced by law and the courts. To fall back on this is a sad reflection of the paucity of progressive conviction around these issues.

Along with federal leader Jagmeet Singh's farcically milquetoast "statement" and Alberta Premier Rachel Notley's outright opportunistic, reactionary embrace of the petrostate, Horgan has proven yet again that anyone expecting anything new or different in any substantive, not lip-service way from the NDP when it comes to pro-corporate energy policy and Indigenous rights is living in a la-la land of counter-productive wishful thinking.

Folks on the "left" condemning Justin Trudeau -- entirely deservedly -- for his sham version of "reconciliation" but not Horgan and Notley are simply mindless, partisan hypocrites.

See also: Hundreds March and Rally in Toronto in Solidarity with Wet'suwet'en: Photos from the Day

Posted by Michael Laxer at 8:57 PM