Which of these countries is not like the other? -- A Justin Trudeau and Chrystia Freeland Imperialism Quiz! 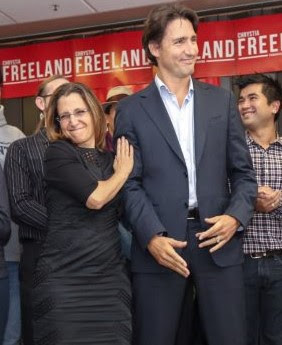 
JT & Freeland: Regard the absolute monarchy with one of the worst human rights records in the world as a close and essential ally and stand by a $15 billion arms deal with it.

Venezuela:
JT & Freeland: Have supported a crippling and criminal American imperialist led economic embargo of Venezuela, have supported clearly illegal and unconstitutional attempts to oust the government, have allied themselves with overtly despotic and neo-fascist governments in the region and have the nerve to pontificate about "democracy".

Can you guess which?
Posted by Michael Laxer at 4:46 PM