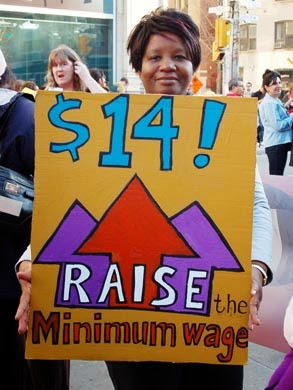 This celebration of the struggle for women's equality stemmed from the fights of women workers to achieve fair wages and safe working conditions. It flowed from the terrible brutality of the deaths at the Triangle Factory in 1911 and yet, over one hundred years later, its promise remains unfulfilled.

While women's rights have made some strides forward, we continue to live in a society where violence against women and rape culture are daily realities. Where liberal and facile notions of "freedom" seek to perpetuate male privilege as a form of an almost constitutional right. And where the reality is that it is women and their children who disproportionately are subjected to the oppressions that are low wages and shameful social assistance rates. This is conveniently ignored by many "progressive" politicians.

As the Canadian Women's Foundation notes:

In addition, a report from Unifor and CUPE finds that:

The rise of precarious work has made it increasingly difficult to classify women by their occupation. Women have been forced to seek work in sectors totally new to them, for example going from being a full-time machine operator to part-time work in the food sector.

“A precarious labour market is de-skilling women,” the report states.

Women have also been pushed into “job ghettoes” such as personal support work, which typically pays low wages while offering only part-time or on-call employment.

This report points out living in poverty and issues like the minimum wage are not only gendered but racialized. As noted in a 2013 Toronto Star article:

“While immigrants and immigration is the heart and soul of the country, if you look at the main basis of inequality in Canada, along with gender, it’s based on race and immigrant status,” said Yogendra Shakya, senior research scientist at Access Alliance.

“Racialized immigrants are facing two to three times the rate of unemployment, higher representation in precarious, contract, on-call or temporary jobs. They are two to four times more likely to be underemployed and have more than double the rates of education level in terms of having post-secondary education.”

The indisputable reality is that poverty and low wages in Canada are gendered and racialized. Due to the subjugation of many single mothers to the brutality of poverty, it is also true that a staggering number of children live in poverty, abandoned not only by their fathers but by governments and political parties that claim to care so much about them.

Given this, it is important on International Women's Day to take governments and all political parties to task for their lack of commitment to economic justice.

In Ontario, for example, the Campaign for $14 fought in 2014 to attempt to achieve something near fair wages. But despite it being an election year and a basic issue of fairness this effort did not succeed. When Ontario's political parties do not support higher social assistance rates and living wages of $14 or $15 (at least) an hour this is a direct attack not only on all workers but also on women workers especially.

The fact is that not a single political party in Ontario's parliament supports even the most basic and obvious way to combat the gendered reality of poverty wages. Instead Ontario's Liberal government indexed poverty wages into law by tying them to inflation starting at a substandard rate of $11 an hour, which means disproportionately indexing women and their children into perpetual poverty.

The struggle for equality is not achievable, other than in the most crass liberal sense, without economic justice. The minimum wage and social assistance rates are a fundamental part of the struggle for women's equality and any party or politician that does not advocate for a living wage or living social assistance rates is directly enabling an agenda that keeps many women, as well as the children that they are often forced to care for, impoverished.

They are directly facilitating the day-to-day fact of the economic expression of misogyny and patriarchy.

This piece is a slightly modified version of an article that first appeared on rabble.ca
Posted by Michael Laxer at 9:15 AM